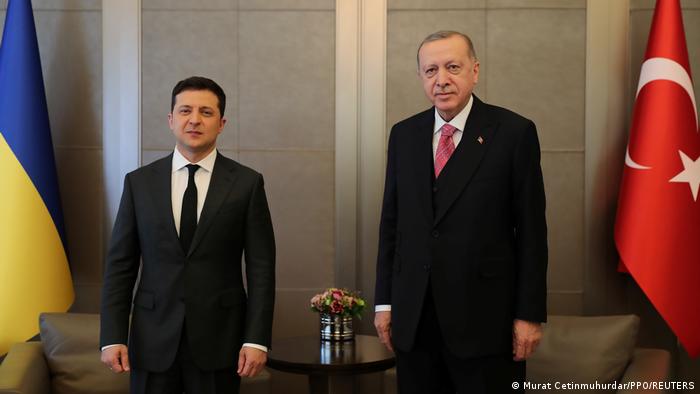 Zelenskyy and Erdogan discussed bilateral relations at their meeting

President Recep Tayyip Erdogan said on Saturday that Turkey was ready to support Ukraine as tensions grow with Russia over its military buildup at the border.

Speaking alongside his Ukrainian counterpart, Volodymyr Zelenskyy, in Istanbul, Erdogan said the situation could be resolved through dialogue. The Turkish president also said that he supported Ukraine's territorial integrity.

Erdogan also said the cooperation between the Turkish and Ukrainian defense industries, which includes the sharing of technology to produce drones and naval corvettes, was not directed against any third country.

In response, Zelenskyy said the governments were united regarding threats in the region and responses to these threats.

What has been happening in eastern Ukraine?

Russia has been deploying troops along the border with Ukraine, where government forces and Russia-backed separatists have been fighting since 2014. More than 14,000 people have been so far killed in the conflict.

Fighting there has been flaring, with both sides accusing each other of violating a truce that took effect in July.

Russia has warned Ukraine not to try to regain control of territory controlled by the separatists. Ukraine's government denies that it is preparing to do so.

The increase in tensions has caused alarm in both the US and Europe, where governments fear that Russia is preparing to send forces into Ukraine.

What is Russia's stance on the crisis?

According to the Kremlin, on Friday Russian President Vladimir Putin told Erdogan, with whom he has a close personal relationship, that Ukraine had "recently resumed dangerous provocations on the contact line."

Ukraine's defense minister, Andrii Taran, said on Saturday that Russia might be resuming armed aggression against Ukraine on the basis of allegations that the rights of Russian speakers in Ukraine were being violated. But he said such aggression could occur "only if an appropriate political decision is made at the highest level in the Kremlin."

Where is Turkey in the Russia-Ukraine conflict?

Turkey is a NATO member, but Erdogan and Putin have concluded a number of energy and trade deals as they try to improve bilateral ties.

Turkey also has an interest in the welfare of Crimean Tatars, who have ethnic links to Turks. Moscow annexed the Crimean Peninsula in 2014 and has also been building up its military presence there in recent days.

Russia's government has claimed that there have been "provocative actions" by Ukraine.