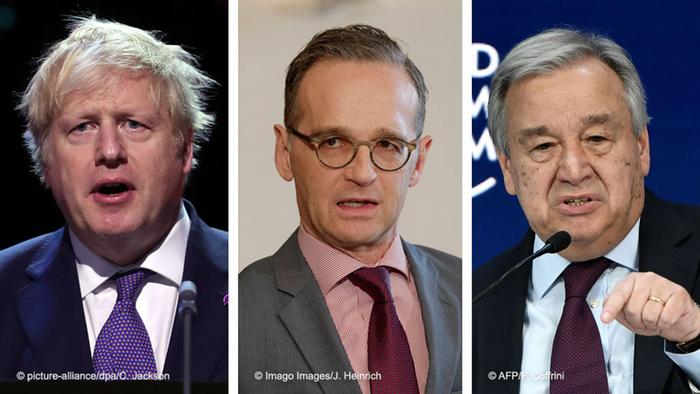 Leaders from around the world have responded with mixed reactions to US President Donald Trump's long-awaited Middle East plan unveiled on Tuesday.

The proposal was released alongside Israeli leader Benjamin Netanyahu in Washington. Palestinian leaders said they were not invited to attend the talks and preemptively rejected the plan. Trump's proposal made concessions to Palestinians — but under terms that they have previously ruled out, such as accepting West Bank settlements.

Europe and the UN were lukewarm and cautious after the peace plan was released.

German Foreign Minister Heiko Maas has called for a balanced approach to breaking the deadlock. "Only a negotiated two-state solution, acceptable to both sides, can lead to a lasting peace between Israelis and Palestinians," he said.

Maas added that Trump's proposal raised questions "about the involvement of the conflicting parties in a negotiation process and their relationship to recognized international parameters and legal positions."

Representatives from the Christian Democratic Union (CDU) and Social Democratic Party (SPD), parties within the grand coalition, doubted that Trump's plan would achieve sustainable peace in the Middle East.

Jürgen Hardt, a foreign policy spokesman for Angela Merkel's CDU/CSU alliance in parliament, told DW that while he welcomed Trump "sticking with the two-state solution," he also worried that "probably some of the demands he mentioned towards Palestinians concerning the territories will not open the door for negotiations."

Hardt also noted that "every new attempt at the peace process which is a failure in the end might increase frustration on both sides and maybe increase the confrontation and not decrease it. Therefore, we have to be very careful with such proposals."

UN Secretary-General Antonio Guterres said the UN supports two states living in peace and security within recognized borders, on the basis of the pre-1967 lines.

"The position of the United Nations on the two-state solution has been defined, throughout the years, by relevant Security Council and General Assembly resolutions by which the Secretariat is bound," said Stephane Dujarric, a spokesman for Guterres.

The EU urged Israelis and Palestinians to study the proposal carefully.

Josep Borrell, the EU's highest-ranking diplomat, said the block will "study and assess" Trump's plans on the basis of its commitment to a "negotiated and viable two-state solution that takes into account the legitimate aspirations of both the Palestinians and the Israelis."

Paris was open to Trump's efforts to come up with a plan, but said it would look closer at the details. "France welcomes President Trump's efforts and will study closely the peace program he has presented," said a statement from the French foreign ministry.

The statement also reiterated France's wish for a two-state solution.

Britain, which is set to depart from the EU on Friday, was much warmer to Washington's proposals.

"This is clearly a serious proposal, reflecting extensive time and effort," British Foreign Secretary Dominic Raab said in a statement.

Russia said it would assess the proposal and called on Israelis and Palestinians to negotiate directly to find a "mutually acceptable compromise."

Deputy Foreign Minister Mikhail Bogdanov added, "We do not know if the American proposal is mutually acceptable or not. We must wait for the reaction of the parties."

Trump called the plan a "win-win" for both Israel and Palestinians and said Palestinians should not miss their chance at independence.

"It's going to work," Trump said as he presented the proposal at a White House ceremony.

"(Palestinian) President Abbas, I want you to know, that if you chose the path to peace, America and many other countries ... we will be there to help you in so many different ways," he said. "And we will be there every step of the way."

Palestinian President Mahmoud Abbas rejected the plan as "nonsense'' and promised to "resist the deal in all its forms."

"This conspiracy deal will not pass. Our people will take it to the dustbin of history," Abbas said.

Hundreds of Palestinians protested in the Gaza Strip ahead of the unveiling of the plan. More protests were expected throughout Wednesday.

The Arab League will hold an urgent meeting on Saturday in response to Trump's proposal. Abbas is expected to attend.

"Our identity as Arabs and Muslims is over ... I felt totally ashamed watching Trump with the Israeli leader," Sheikh Ahmed al-Tayeb said.

However, Gheit added that the League will study "the American vision carefully." "We are open to any serious effort made to achieve peace," he said.

Israel, delighted with the proposal, vowed to immediately urge forward its plans to annex the strategic Jordan valley and all the Israeli settlements in occupied territories.

Netanyahu said he would ask his Cabinet to approve the annexation plans in their next meeting on Sunday, which could spark anger among Palestinians.

"This dictates once and for all the eastern border of Israel," Netanyahu told reporters. "Israel is getting an immediate American recognition of Israeli sovereignty on all the settlements, without exceptions.''

After a delay of multiple years, the US president has said he will reveal his plan for Israeli-Palestinian peace imminently. Leading Israeli politicians — but no Palestinian ones — have been invited to the White House. (24.01.2020)