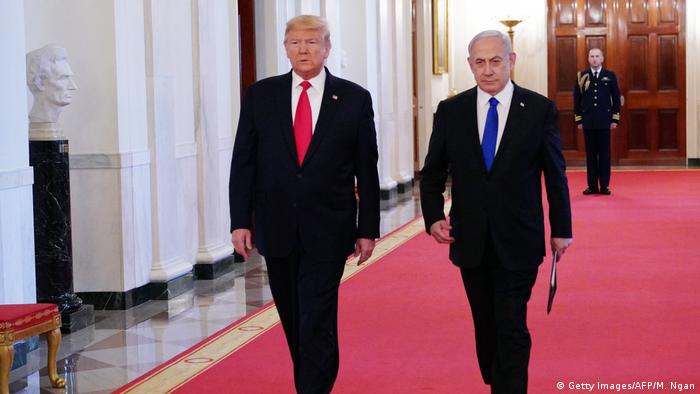 "Together we can bring about a new dawn in the Middle East," said Trump, who also called it "the toughest deal ever to make." He thanked the governments of Oman, Bahrain and the United Arab Emirates for their assistance in the peace process.

Netanyahu called it a "historic day" on a par with May 14, 1948, when US President Harry Truman became the first international leader to recognize the state of Israel.

"Mr. President, I believe that down the decades, and maybe even down the centuries, we will remember January 28, 2020," Netanyahu continued, saying the plan was "a realistic plan for durable peace."

Trump called the deal a "realistic two-state solution." He also said that Jerusalem would remain Israel's "undivided capital" under the proposed plan. However, he went on to say that a future Palestinian state's capital should be made up of parts of East Jerusalem in a kind of joint-territory agreement, which corresponded more closely with briefings from officials at the US State Department prior to the release.

The accord also calls for a minimum four-year freeze in Israeli settlement construction, though it would allow Israel to maintain control over most of the illegal settlements it has already built.

Although the outline makes several concessions to the Palestinians, including doubling their currently controlled territory, it does ask them to cross what has previously been described as a red line by accepting the previously constructed West Bank settlements as Israeli territory.

The plan, which had been delayed for two years, has already been rejected by the Palestinians, whose representatives were not invited to the meeting. Palestinian officials argue that Trump is too biased in favor of the Israeli government and only seeks to bolster Netanyahu's nationalist government.

Trump: 'A win-win opportunity for both sides'

As Europe began to react to the announcement, Foreign Minister Heiko Maas said in a statement that Germany welcomed "every impulse to get the long-stalled Middle East peace process back up and running" and would pay close attention to the detail of the plan. However, he added that "only a negotiated two-state solution that is acceptable to both parties can lead to a lasting peace between Israelis and Palestinians."

On Tuesday, thousands of Palestinians took to the streets of Gaza City to protest the plan, burning pictures of Trump and Netanyahu and holding banners that said "Palestine is not for sale.''

The announcement came the same day that Netanyahu withdrew his request for immunity from prosecution as he faces a slew of corruption charges, including fraud, breach of trust, and bribery. Israel is going to the polls for the third time in a year in March, after two previous elections ended inconclusively.

"Claiming to advance peace without the involvement of one party to the conflict is a diplomatic hoax that undermines the chance of a genuine two-state solution," he said.

The US-based Palestinian Campaign for Human Rights warned the plan would lead to "apartheid."

However, close US allies in the Middle East were more supportive. The United Arab Emirates called it a "serious proposal" and "an important starting point," while Saudi Arabia said it "appreciates" Trump's peace efforts in the region.

Trump has been promising the peace plan since he was on the campaign trail, famously handing the task off to his son-in-law Jared Kushner shortly after taking office, along with a diverse portfolio that included the opioid crisis and veterans' affairs.

US President Donald Trump's Middle East peace plan is largely aligned with Israeli interests, while the Palestinians' concerns are ignored. It will not end the conflict in the region, says DW's Rainer Sollich. (29.01.2020)