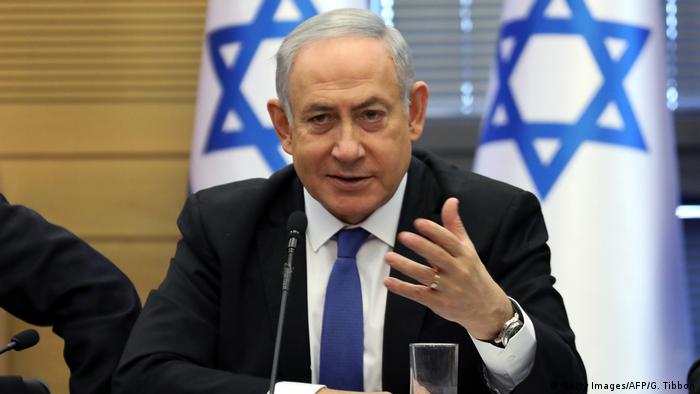 Israel's prime minister on Tuesday issued a statement withdrawing his request for immunity from prosecution, just hours before parliamentary proceedings were due to get underway.

Netanyahu, who was visiting Washington ahead of the launch of Trump's Middle East peace plan, said in a Facebook post that he had "decided not to let this dirty game continue."

Israel's parliament, the Knesset, was set to start discussions on the immunity request on Tuesday. Netanyahu's Likud party had already said it was planning to boycott the session.

"In this fateful hour for the people of Israel, when I am in the United States on a historic mission to design the permanent borders of Israel and ensure our security for decades to come, the Knesset is expected to open another exhibition in the circus of removing immunity," Netanyahu wrote in a Facebook post.

The Israeli leader slammed the proceedings against him as "personal persecution" by his political opponents.

"They continue to engage in cheap politics that harm a decisive moment in the history of the country," he said.

The retraction paves the way for legal proceedings against Netanyahu, who was indicted in November on counts of fraud, breach of trust and bribery in three separate cases.

Netanyahu's main political rival, Benny Gantz, leader of the centrist Blue and White party, responded with a statement of his own. "Netanyahu is going to trial — we must go forward," Gantz said.

"Nobody could run a country and simultaneously manage three serious criminal charges of bribery, fraud and breach of trust," added Gantz, who is Netanyahu's main challenger ahead of a general election in March.

Netanyahu and Trump held preparatory talks on Monday, with Gantz meeting the US president separately later.

Gantz had been planning to return to Israel to vote against Netanyahu's bid for immunity, skipping a ceremony to announce the peace plan.

Both Gantz and Netanyahu have spoken about Trump's plan — which is believed to heavily favor Israel's position over that of the Palestinians — in glowing terms. However, Palestinian leaders have said that they were not invited to the announcement, and that no peace plan could work without them.

"We reject it, and we demand the international community not be a partner to it because it contradicts the basics of international law and inalienable Palestinian rights," Palestinian Prime Minister Mohammad Shtayyeh said on Monday. "It is nothing but a plan to finish off the Palestinian cause."

Palestinians have refused to engage with the Trump administration, claiming that the US is no longer an honest broker in negotiations. Palestinian leaders have voiced strong opposition to US policies such as the relocation of the US Embassy from Tel Aviv to Jerusalem, and other steps they consider biased.

Israel is in a political deadlock, and it is unlikely the parliamentary elections in March 2020 will change the situation. But there are chinks in the armor of PM Netanyahu's own party, says Peter Philipp. (25.12.2019)

Legal challenges and an appeals process could mean it is two years before Benjamin Netanyahu faces trial. The corruption charges add to political uncertainty as lawmakers make their fourth attempt at forming government. (21.11.2019)