Voters in Israel will head back to the polls for the third time in one year after politicians failed again to form a coalition. Lawmakers passed blame around for the stalemate as they voted to dissolve parliament. 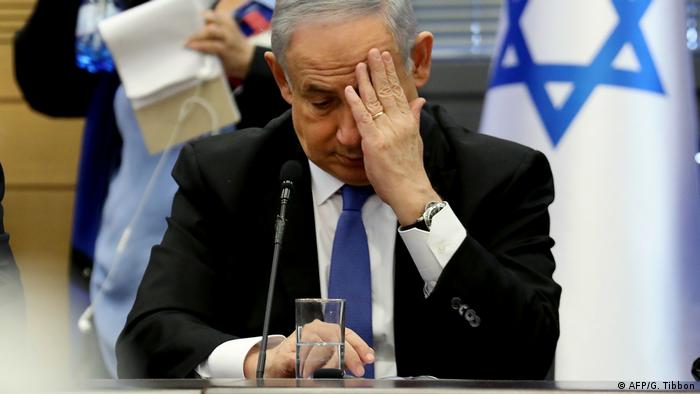 Israeli lawmakers failed to form a governing coalition on Wednesday, forcing the country to hold an unprecedented new round of elections for the third time in 12 months.

A midnight deadline passed shortly after lawmakers in Israel's Knesset began the process of dissolving itself.

Lawmakers voted to hold the polls on March 2.

Party leaders traded blame for the yearlong political stalemate that has paralyzed Israel's government and sparked distrust among voters.

This year's elections in April and September ended up in a neck-and-neck race between Prime Minister Benjamin Netanyahu's right-wing Likud party and his centrist rival Benny Gantz's Blue and White party.

Both parties failed to secure a parliamentary majority. Netanyahu and Gantz had discussed forming a unity government, but talks ended up breaking down.

"They forced new elections upon us," Netanyahu said in a video published on Wednesday, referring to Gantz's party.

Ganz fired back, saying that the prime minister's legal troubles and ongoing indictment on corruption charges were the cause of the latest round of elections.

"We will be going into a third election cycle today because of Netanyahu's attempt to obtain immunity," Gantz said in parliament. "We must stand in opposition to this."

Netanyahu has until January 1 to ask parliament to vote on granting him immunity against criminal charges. The 70-year-old prime minister was indicted last month on charges of accepting bribes, fraud and breach of trust.

Israel has deported Omar Shakir of Human Rights Watch, claiming he supported a boycott of the Jewish state. Shakir, whose appeal against the expulsion was denied, said it was "an attack on the human rights movement." (26.11.2019)

Deutsche Bahn to spend €12.7 billion on infrastructure and digitalization 5h ago