Thousands of Israelis rallied in Tel Aviv to call on embattled Prime Minister Benjamin Netanyahu to step down. The conservative leader faces multiple corruption charges but says he has no plans to give up power. 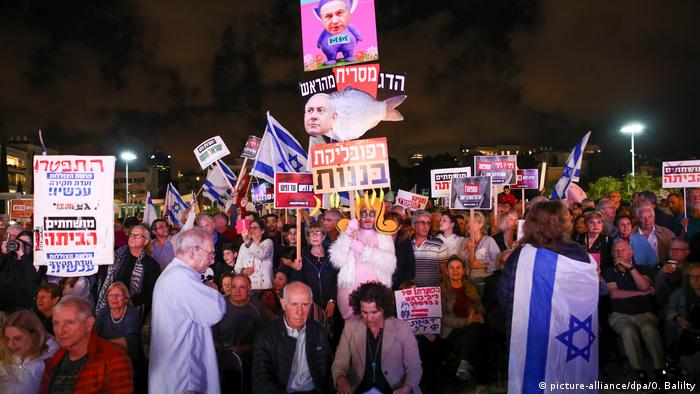 The 70-year-old last week became the first sitting head of government in Israel's history to be indicted with fraud, bribery and breach of trust.

Protesters at the rally, organized by the Movement for Quality Government in Israel, held banners describing Netanyahu as a "corrupt" leader and calling for a "strong Israel, strong democracy."

On Tuesday, about 5,000 people held a demonstration in Tel Aviv in support of Netanyahu, who, after a decade in office, is Israel's longest-serving prime minister.

Israel is in the midst of a crisis after two parliamentary elections this year ended in political deadlock. Voters will have to head to the polls for a third time if no government is formed before a December 11 deadline.

Netanyahu is also facing a leadership challenge from a fellow member of his own conservative right-wing Likud party, former Education Minister Gideon Saar. A recent survey of 1,513 registered Likud members conducted by Direct Polls indicated that 53% plan to support Netanyahu in the party primary election due in six weeks, while 40% back Saar.

If Netanyahu is replaced, the new Likud leader would be the party's candidate in the likely third parliamentary election.