Israeli President Reuven Rivlin has mandated Benny Gantz, of the country's Blue and White party, with the task of forming a government. If he can't, Israel could be headed for an unprecedented third election. 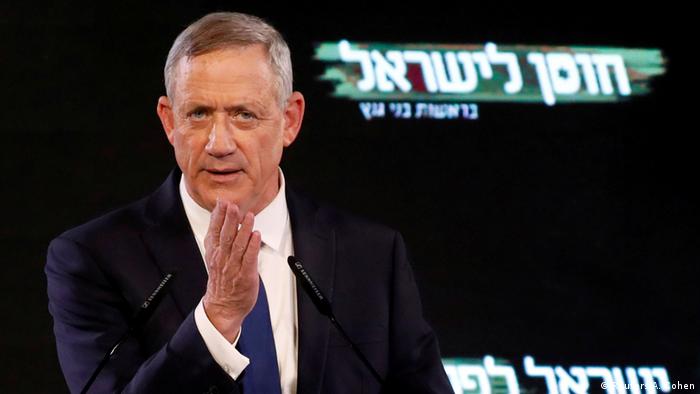 Ex-military chief Benny Gantz accepted the challenge of forming a new government on Wednesday, becoming the first person other than Prime Minister Benjamin Netanyahu to do so since 2009.

After inconclusive elections in both April and September, Netanyahu has struggled to form a coalition and finally gave up on Monday.

At a press conference in Jerusalem, President Reuven Rivlin called on the various political parties to make "concessions," while Gantz promised he would "try to form a liberal union government."

Although Gantz — who will have 28 days to form a government — has expressed confidence about the task, he is expected to face many difficulties.

If Gantz is unable to build a coalition in time, the country would face an unprecedented third election in a year, an effort to reset the parliamentary arithmetic. Rivlin promised Wednesday night that he would do everything possible to avoid another vote.

No desire for 'national unity' government

Gantz has so far rejected an offer for Blue and White to join Netanyahu's Likud in a "national unity" government. In doing so, he has cited looming corruption indictments against the prime minister. Netanyahu denies the allegations.

Although the Blue and Whites are more of a big-tent alliance than a traditional political party, Gantz only has the endorsement of 54 lawmakers — seven short of the parliamentary majority he requires.

A secularist, he's not keen to include ultra-Orthodox Jewish parties — who are some of Netanyahu's traditional allies — in his administration.

A security hawk, the 60-year-old Gantz is, like Netanyahu, determined to keep the Jordan Valley in the occupied West Bank under Israeli control. He also wants to maintain Israeli sovereignty over annexed Arab east Jerusalem.

Netanyahu will remain as caretaker prime minister until a new government can be established. He has been prime minister since 2009, and had a first term from 1996 to 1999, which makes him Israel's longest-serving leader.

US justice department moves to drop Flynn charges 53m ago