Israel has deported Omar Shakir of Human Rights Watch, claiming he supported a boycott of the Jewish state. Shakir, whose appeal against the expulsion was denied, said it was "an attack on the human rights movement." 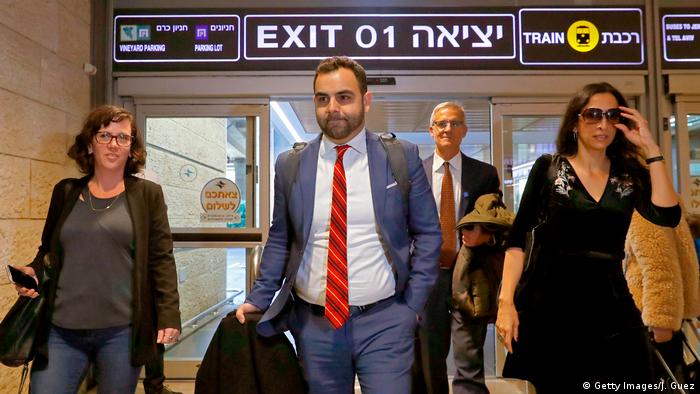 Omar Shakir, the local director for Human Rights Watch, left Israel for Germany on Monday after being expelled from the Middle Eastern country.

The Israeli government has accused Shakir, a 35-year-old American citizen and the rights group's director for Israel and the Palestinian territories since October 2016, of backing a boycott of the Jewish state. He has denied the claim.

Before departing from Ben Gurion Airport near Tel Aviv, Shakir said his deportation was "an attack on the human rights movement" and an Israeli attempt to "muzzle Human Rights Watch."

"We will not stop until the day comes in which all people, Israelis and Palestinians, will be treated equally and have their whole human rights protected," he said.

Shakir was accused in April of supporting the Boycott, Divestment and Sanctions movement against Israel for its military occupation of the West Bank and its building of illegal settlements in occupied Palestinian territories.

Israel has formally banned entry of BDS supporters and has pressured Western countries to stunt the movement's influence.

The case against Shakir was based on comments he made before he joined Human Rights Watch, some going back to his student days nearly a decade ago. Shakir appealed his deportation, but Israel's Supreme Court backed his expulsion earlier this month.

More than 600,000 Israelis live in settlements on Palestinian land, communities considered illegal under international law — a ruling which Israel disputes.

Last week, the United States announced it no longer considered the settlements illegal, breaking with decades of international consensus.

'This Place': International photographers present their impressions of Israel

Twelve photographers were asked to participate in a long-term project, with the aim of exploring Israel from a personal view via their camera. Their photographs and videos are now on show at the Jewish Museum in Berlin. (17.06.2019)