Israel bans entry to two Muslim US congresswomen over their criticism

The decision to bar Representatives Ilhan Omar and Rashida Tlaib is likely to deepen a rift within the Democratic Party over Israel. President Donald Trump advocated for not letting the lawmakers into Israel. 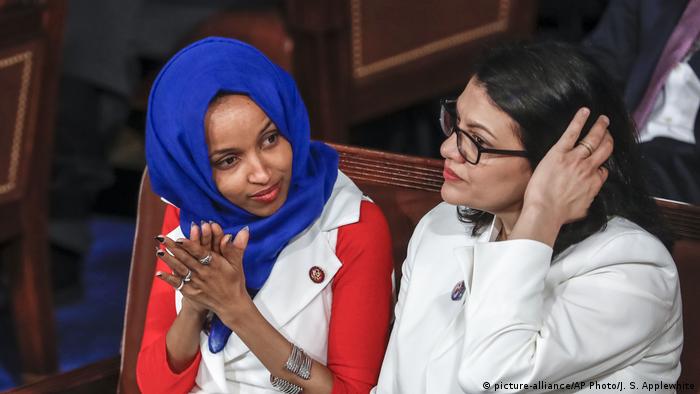 Israel's government decided to bar two Democratic congresswomen from entering the country on Thursday, in an unprecedented move that is likely to reverberate through the halls of the US Congress.

Rashida Tlaib, who is of Palestinian origin and has family in the West Bank, and Ilhan Omar were expected to arrive at the weekend for a visit to Jerusalem and the Palestinian territories.

The left-leaning Muslim congresswomen are outspoken critics of Israel's policy toward the Palestinians and support the so-called BDS movement, which advocates boycotts, divestment and sanctions against Israel. They are also sharp critics of US President Donald Trump, a close ally of Israeli Prime Minister Benjamin Netanyahu.

"As a vibrant and free democracy, Israel is open to any critic and criticism, with one exception," Netanyahu said in a statement. "Israel's law prohibits the entry of people who call and act to boycott Israel, as is the case with other democracies that prevent the entry of people whom they see as harming the country."

In 2017, Israel passed a law banning entry of activists including Jewish supporters of the BDS movement, arguing it is anti-Semitic and a threat to the country's existence. Last month, Israel's ambassador to the United States Ron Dermer said Israel would allow the lawmakers to enter "out of respect for the US Congress and the great alliance between Israel and America."

Supporters of BDS argue it is a non-violent movement similar to the anti-Apartheid struggle in South Africa in response to Israel's military occupation of the West Bank and illegal settlement building.

The decision to ban the congresswomen is likely to deepen rifts among Democrats over Israel, which has historically maintained bi-partisan support in Congress. It comes at a time when support for Israel under Netanyahu's right-wing government is waning among Democrats, with one survey indicating that 56% of Democrats would support economic sanctions on Israel if it continued to expand settlements.

Tlaib responded to the ban by tweeting a photo of her grandmother, who lives in the West Bank. She wrote that barring her granddaughter from entering "is a sign of weakness" because "the truth of what is happening to Palestinians is frightening."

In a statement, Omar described the move to block her and Tlaib as "an insult to democratic values."

US Senator Elizabeth Warren, a contender for the Democratic presidential nomination, wrote on Twitter that "Israel doesn't advance its case as a tolerant democracy or unwavering US ally by barring elected members of Congress from visiting because of their political views."

Trump has openly clashed with Omar, Tlaib and two other Democratic congresswomen of color over Israel and their "leftist" policies in a bid to rally the conservative Republican base ahead of the 2020 elections.

Israel's Channel 13 reported this week that Trump told advisers that Israel should prevent Omar and Tlaib from entering the country, a view that reportedly reached senior Israeli officials.

"It would show great weakness if Israel allowed Rep. Omar and Rep.Tlaib to visit. They hate Israel & all Jewish people, & there is nothing that can be said or done to change their minds," Trump wrote on Twitter shortly before Israel announced the lawmakers would be barred.

Last month, Omar introduced a resolution co-sponsored by Tlaib and civil rights icon John Lewis reaffirming boycotts as a constitutionally protected right to free speech. The resolution didn't specifically mention Israel or the Palestinians, citing instead past sanctions and boycotts against the Soviet Union, South Africa and Nazi Germany.

In July, the Democratic-led House of Representatives voted overwhelmingly in favor of a resolution against the BDS movement and reiterated support for a two-state solution the Israel-Palestinian conflict.

In response, 21 right-wing members of the Israeli Knesset sent a letter to four US lawmakers this week saying Congress made a "grave error" supporting a two-state solution and the establishment of a Palestinian state.

"We would like to make our position clear that the establishment of a Palestinian state would be far more dangerous to Israel than BDS," the Israel lawmakers wrote.

The American Israel Public Affairs Committee (AIPAC) is preparing for its annual conference. The meeting could prove more contentious than usual, as the powerful lobby group faces questions as to the extent of its reach. (23.03.2019)