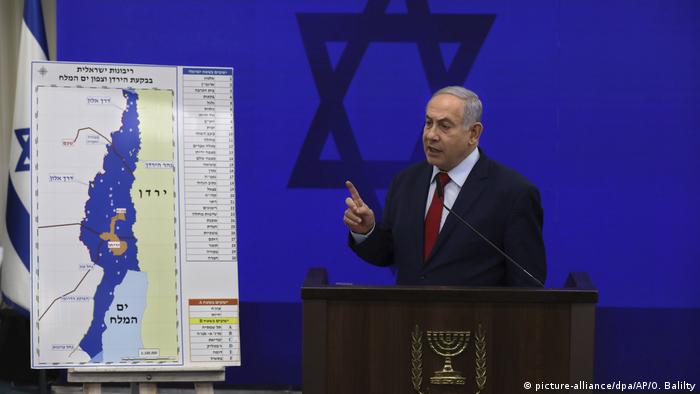 Israeli Prime Minister Benjamin Netanyahu's campaign promise to annex the West Bank's Jordan Valley was met with strong condemnation from the international community, with the UN and the EU saying it would be illegal under international law.

The West Bank and the decades-long Israeli settlements over the area lay at the heart of Palestinian-Israeli conflict.

To annex even a portion of the territory could have far-reaching consequences for the territory's residents and for the peace process as a whole.

A look at the complex nature of the West Bank and the Jordan Valley helps explain why Netanyahu's annexation pledge is so contentious.

Origins of the West Bank

When the 1947 UN partition of the Mandate of Palestine recommended the region be split between an Arab and a Jewish state, the territory currently known as the West Bank fell under the proposed Palestinian-Arab territory.

Following the UN declaration and the establishment of the Israeli state, fighting and civil war broke out between Israelis and Palestinian Arabs, backed by the surrounding Arab states, over control of the land.

As Palestinian efforts were unsuccessful, hopes for a nation-state faded and the future of the territories was in doubt. Neighboring countries retained their own claims over their territories bordering Israel and as such, the Jordanian-Israeli armistice of 1949 carved the boundaries for what today is known as the West Bank.

Read more:Exhibition shows Israel and the West Bank from a new perspective

But following the 1967 Six-Day War Israel captured the West Bank, along with the Gaza Strip and Golan Heights.

Israeli occupation of the West Bank and its claims over the other territories has never been recognized by the international community.

Nonetheless, construction of Israeli settlements in the occupied territory began between the 1970s and 80s. This was also considered illegal by the UN and opposed by Palestinians.

Few settlements existed initially, but by the early 2000s, they numbered more than 100 and were spread throughout the West Bank.

Settlement policy, supporting them or dismantling them, has been at the heart of Israel's domestic politics and a sore point in globally-led peace negotiations.

What is the Jordan Valley?

In his annexation announcement this week, Netanyahu displayed a map of the area that runs along the Jordan River and the 1949 Armistice line with neighboring Jordan.

This sliver of the West Bank dubbed the Jordan Valley is where Netanyahu said he could "apply Israeli sovereignty immediately."

It accounts for one-third of the West Bank and is home to 9,000 of the 400,000 Israelis that live in the occupied territory.

The Jordan Valley comprises 60% of Israel's fully-controlled area in the West Bank and is considered strategically important, as it hosts many Israeli agricultural business interests.

Israeli human rights group B'Tselem has said that some 65,000 Palestinians currently live in the area.

Netanyahu's move to annex the Jordan Valley is seen as a last-ditch effort to raise his popularity ahead of next week's parliamentary elections, after he was unable to build a coalition this summer when his party eked out a win in the previous vote.

But Netanyahu has always leaned to the right on settlement policy. In March of 2017, his security cabinet approved the first new settlement in the West Bank in two decades.

He has also been emboldened by support from US President Donald Trump, who cheered on the Israeli prime minister's annexation of the Golan Heights. In this light, the Jordan Valley can be seen as the continuation of Netanyahu's policies.

Though Israel already fully controls the Jordan Valley, a formal annexation of such a large part of the West Bank would send a strong message about Israeli sovereignty over Palestinian lands.

The move will reward and empower right-wing politicians in Israel, who see the Jordan Valley as the country's eastern border and who are staunchly opposed to a two-state solution.

It would also be a boon for Israeli settlers, as annexation could further legitimize development in the area and potentially make settlements grow.

The state of Palestinians living in the Jordan Valley would also be uncertain, as it is not clear in Netanyahu's plans whether they would be considered Israeli citizens or residents with lesser rights.

Ultimately, critics see the annexation of any portion of the West Bank territory as a threat to achieving wholesome peace and roadblocks in the global quest to end the Palestinian-Israeli conflict.

Arab states, Iran and the UN Security Council have voiced outrage over the US president's declaration that Israel should have sovereignty over the disputed Golan Heights. Israel annexed the territory from Syria in 1981. (26.03.2019)