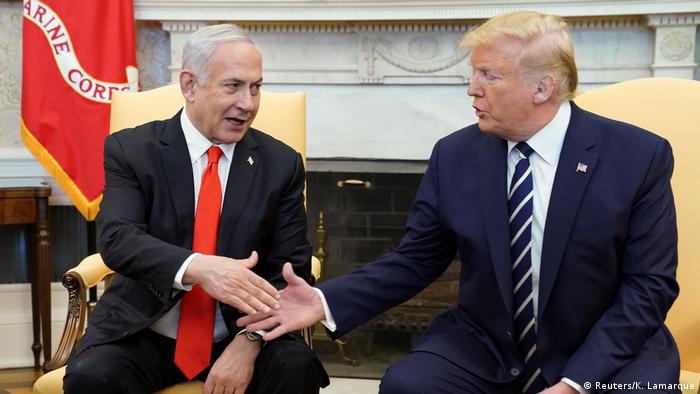 US President Donald Trump met separately with Israeli Prime Minister Benjamin Netanyahu and opposition leader Benny Gantz at the White House on Monday, to discuss a Middle East peace plan that has already been rejected by the Palestinians.

Amid a heated impeachment trial and a difficult reelection campaign, Trump is devoting both Monday and Tuesday to discussing the contested plan with Netanyahu and Gantz.

He will again host Netanyahu on Tuesday for what is set to be the official roll-out of the plan, which has been three years in the making.

Israel is set for another election in just over a month, with Netanyahu's conservative Likud party and former military chief Gantz's centrist Blue and White party currently running close to each other in the polls.

Peace plan to be unveiled

At the meeting with Netanyahu on Monday, Trump said he believed both the Israeli prime minister and Gantz would like his peace plan, which he said would be released at noon local time (1700 UTC) on Tuesday. "I think it might have a chance," he said, predicting that the Palestinians would also end up accepting the plan.

Netanyahu said in his turn that the plan might be the "opportunity of a century."

After talking with Trump later in the day, Gantz also praised the peace deal and said he had had a "superb meeting" with the US president.

But Israel's most powerful adversary in the region, Iran, is less impressed with the US blueprint, with the Islamic Republic's Foreign Minister Javad Zarif calling it "delusional."

Critics have blasted the timing of the unveiling as a ploy to interfere with internal Israeli politics to boost approval of Netanyahu ahead of the March 2 Israeli vote.

Palestinians vehemently reject the plan, overseen by Trump's son-in-law Jared Kushner and which has been dubbed the "Deal of the Century" in Israel. The plan would not allow for East Jerusalem to be the capital of the Palestinian state, and would also provide for official US recognition of Israel's West Bank settlement blocs.

Additionally, Palestinian leadership was not invited to the White House to discuss the plan.

Trump has repeatedly called himself the most "pro-Israeli" American president in history. Trump, Netanyahu and Gantz have all openly expressed their optimism for the plan, with Netanyahu saying he is "full of hope that we can make history" and Gantz offering similar sentiments. Last Thursday, Trump described the plan as "great" and said it "really would work."

A long history of failed talks

Trump's initiative follows a history of failed peace plans since Israel captured the West Bank from Jordan and the Gaza strip from Egypt in the 1967 Six-Day War.

In 2010, Israel also imposed a 10-month partial moratorium on West Bank settlement construction. However, peace talks that had recently resumed broke down again because Netanyahu refused to extend the moratorium beyond the 10-month mark.

An Israeli-Palestinian peace plan without the Palestinians?

As the Trump administration prepares to release its Israeli-Palestinian peace blueprint, DW speaks with a Middle East expert who fears the plan will ignore the Palestinians at the peril of peace. (28.01.2020)