It is unprecedented even in Israeli politics: Voters are going to the polls for the second time in six months. And Prime Minister Benjamin Netanyahu is fighting for his political survival. 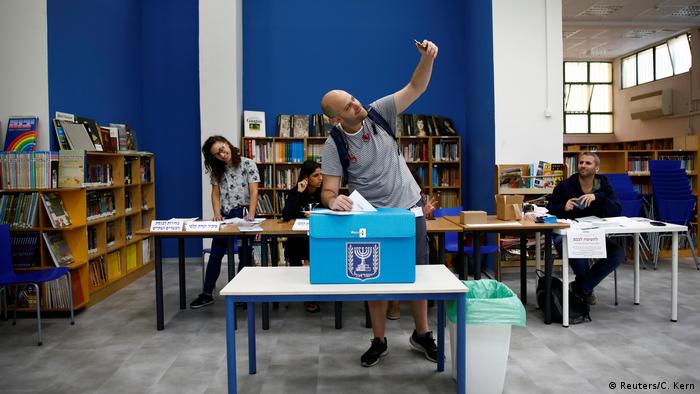 In a public park in West Jerusalem, a small group of Blue and White activists have gathered for a picnic. Ahead of Tuesday's election, they're discussing their strategy to mobilize their voters to cast their ballot for Benny Gantz, the former military chief and leader of the Blue and White centrist alliance.

Not an easy task in a city that has a long tradition of voting for right-wing and ultra-Orthodox parties. But Gantz's party proved to be a real threat to Prime Minister Netanyahu and his Likud party in the last election in April. And current polls predict another tight race. "I think Bibi Netanyahu did a lot of good for our country but after 13 years, it's time for a change," says activist Yamit Avrahmu. "I think that Benny can bring a new spirit. Our country needs this." 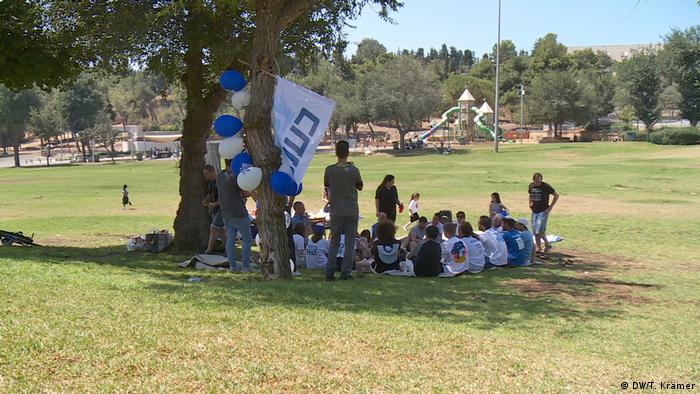 Blue and White activists in Jerusalem

Now, Israelis have to do it all over again — and some have described Netanyahu's campaign as a fight for his political life, not least as he faces possible indictments on three corruption charges.

"These elections are about three main things: one is Netanyahu's character and leadership. The second is the threat to the democratic institutions, and third the competition over values: traditional versus liberal, secular versus religious," says Tamir Sheafer, dean at the Social Sciences Department at Hebrew University. 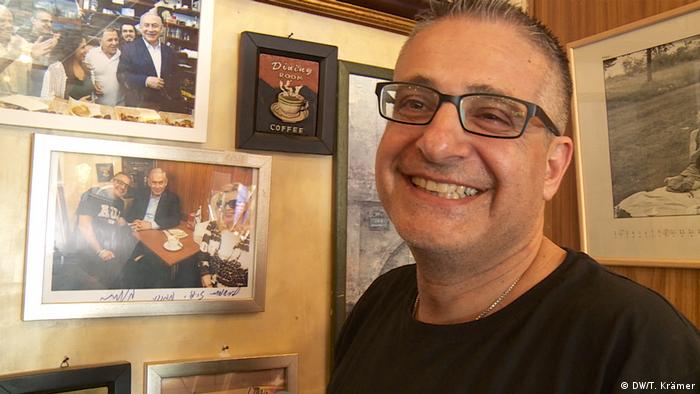 Cafe owner Nuriel Zarafi says Netanyahu is getting his vote

In a cozy cafe in West Jerusalem, owner Nuriel Zarifi has no doubt who to vote for. He personally knows the prime minister who sometimes stops by for a coffee and a Danish pastry. The walls feature pictures of the prime minister's visits.

"The man has experience. This is important to every ordinary citizen, especially in a country like Israel with so many challenges. And he has good relations with world leaders like Angela Merkel, Donald Trump, Vladimir Putin. With him, we can sleep peacefully at night," he says.

Netanyahu's campaign portrays him as a true statesman, the only one capable of keeping Israeli citizens safe. Recent trips abroad to meet UK Prime Minister Boris Johnson in London and Russian leader Putin in Sochi underline that image. Other huge campaign banners titled "a different league" show him shaking hands with US President Trump. 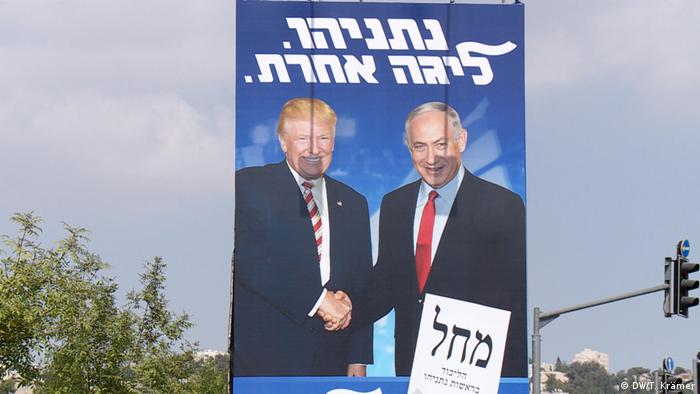 Recent reports, however, about a possible opening for talks between Iran and the US have overshadowed the close relationship. And it is yet to be seen whether Netanyahu's campaign promises will actually sway right-wing voters to cast their ballots for Likud rather than for smaller right-wing parties and other potential coalition partners.

Last week, Netanyahu promised to "apply sovereignty" to Israeli settlements in the Jordan valley and the area north of the Dead Sea if voters give him a mandate to do so. Netanyahu said it was an historic opportunity, not least because the US administration plans to unveil its so-called Mideast peace plan sometime after the election. 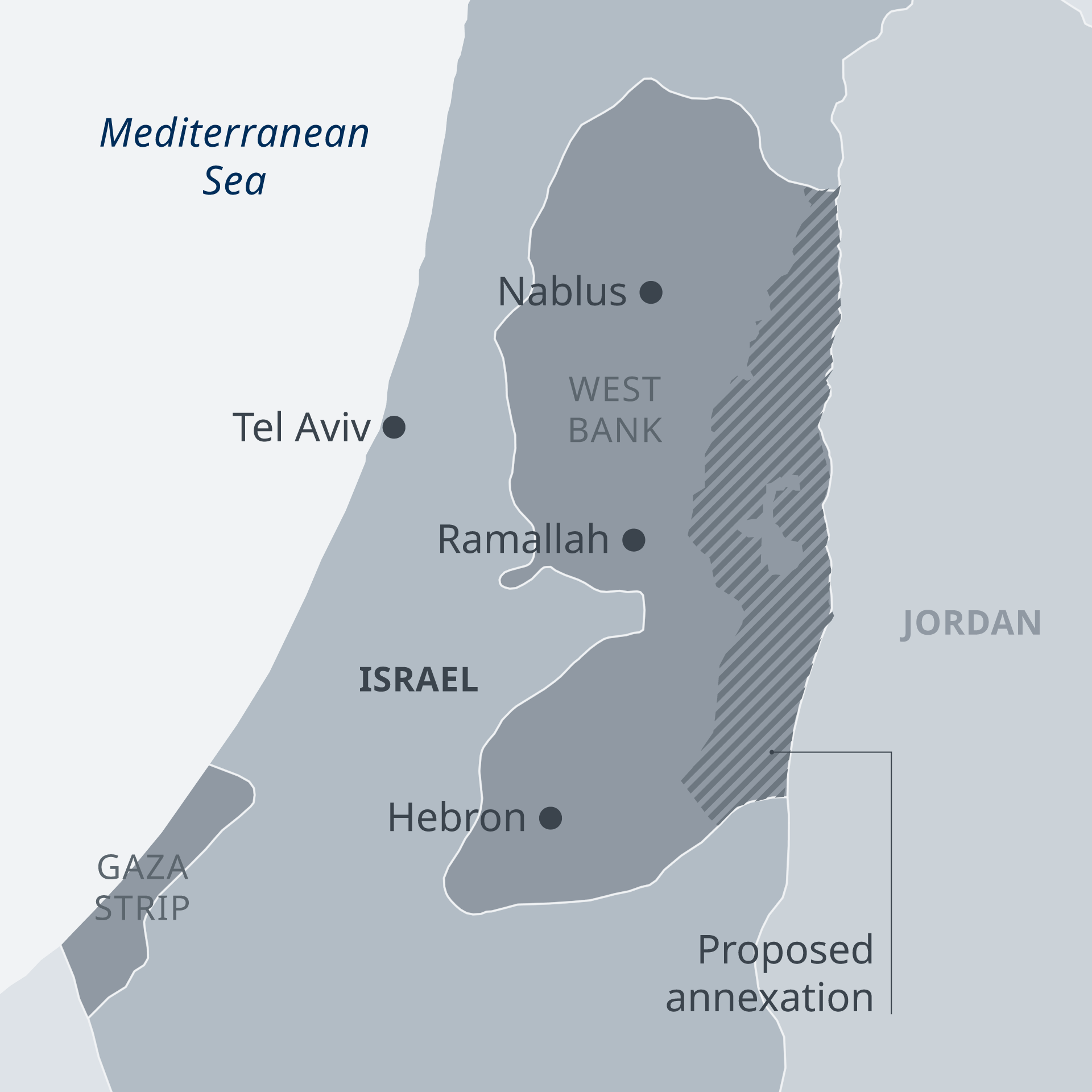 Blue and White leader Benny Gantz, whom Netanyahu describes as a "weak leftist," called the pledge an "empty promise," but was quick to point out that his party platform has always made it clear that the Jordan Valley "is a part of Israel forever."

"Netanyahu is happy to promise anything in this election. And people are very cynical about it, including the right wing who are in favor of the annexation. They are saying 'well you've been prime minister for 13 years, why haven't you done it by now,'" says Haaretz journalist Anshel Pfeffer.

Netanyahu's political opponents from the center-left have made a major campaign issue out of the looming indictment case. They accuse him of embracing more extremist right-wing politicians in exchange for their loyalty pledges so that he can remain in power. "Israelis have been victims of a corrupt government for a long time," says Stav Shafir, a former Labor politician and number two in the newly formed Democratic Union, a merger of three center-left parties. There is a need, she says, to "fight the right that became ever more radical and more and more extreme, more racist."

The key to power: Coalition talks 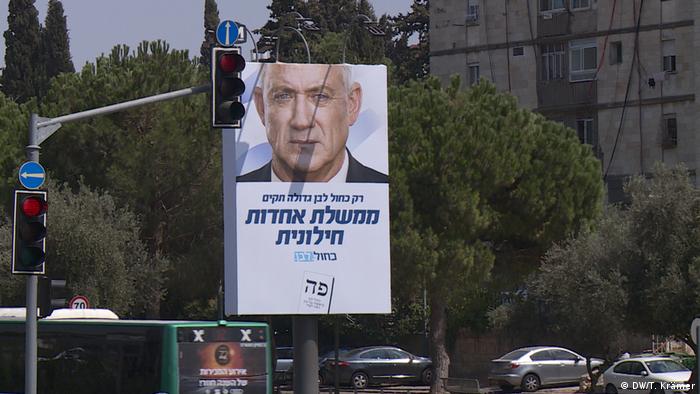 The real power struggle begins the day after the elections. Polls show mixed outcomes as to what coalition government Israelis prefer. A recent poll by the Israel Democracy Institute showed that among Jewish Israelis, 39% want a unity government with Likud and Blue and White as major coalition partners.

In another poll by the "Knesset Channel," 38% said they prefer a right-wing, ultra-Orthodox coalition, and only 21% would like to see a unity government.

"In Israeli politics anything can happen. Netanyahu says he wants a coalition of 61 Knesset members on the right end of the political map," says Gil Hoffman, chief political correspondent for the daily Jerusalem Post. "That's not so much for ideological reasons, but because the same 61 Knesset members should be the ones who say that he wouldn't have to stand down if he is indicted."

Another possibility is that neither Likud nor Blue and White will be able to form a coalition. In this scenario, Likud would be forced to elect a new leader to stay in power, says Hoffman.

"That new leader would be able to form a unity government very easily because all other parties are saying that while the Likud could be a coalition partner, Netanyahu cannot [be part of it]."