Is Israel ready for fundamental political change? | Middle East | News and analysis of events in the Arab world | DW | 08.04.2019

The election race between Benjamin Netanyahu's Likud party and the new Blue and White alliance headed by Benny Gantz is going down to the wire, with many voters still undecided. Tania Krämer reports from Jerusalem. 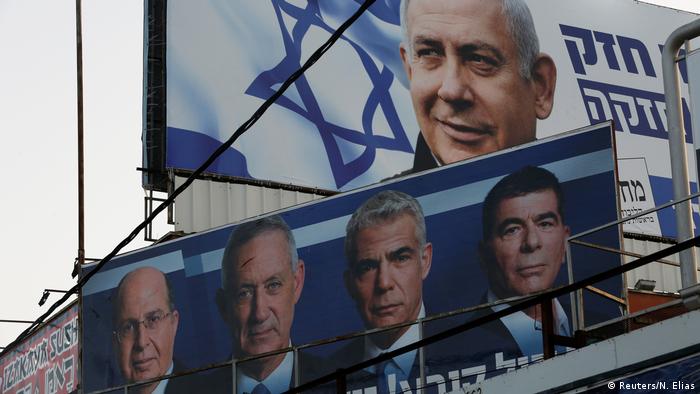 Residents of the southern Israeli farming community of Beer Tuvia made every effort to put on a homecoming party for Benny Gantz at a recent Blue and White campaign event. In front of the church hall, tables were adorned with cabbage, flowers and goat cheese as part of a rousing welcome for Gantz.

His speech, in which he vowed to fight Prime Minister Benjamin Netanyahu's polarizing politics, was music to his supporters' ears. "We build a cabinet of hope, not a cabinet of radicals and incitement," said the career soldier, who grew up on a farming community nearby.

"There is a need for a change. I believe he will bring the spirit of change. I watched him over the past months, and I believe he should be the next prime minister," said Yonathan Philosoph, who thinks it's time for Netanyahu to move on.

Others came to the event still undecided ahead of Tuesday's election. "I am not decided yet, so I came here to listen. For sure I won't vote for Bibi, and everything that could stop him is important to me," said Gilit Heyman, using a nickname for the prime minister. "Gantz is from the area, I know the family, and I think he could be good."

In February, ex-army chief Gantz and journalist-turned-politician Yair Lapid announced that they would run together on a new platform named Blue and White. They would rotate the prime ministership, taking two years each. Two other former Israel Defense Forces (IDF) chiefs of staff have joined their party at the top of the list. Such military credentials play a crucial role in a country where security is one of the main concerns. Gantz spent over 30 years in the IDF and served as chief of staff under Netanyahu between 2011 and 2014. 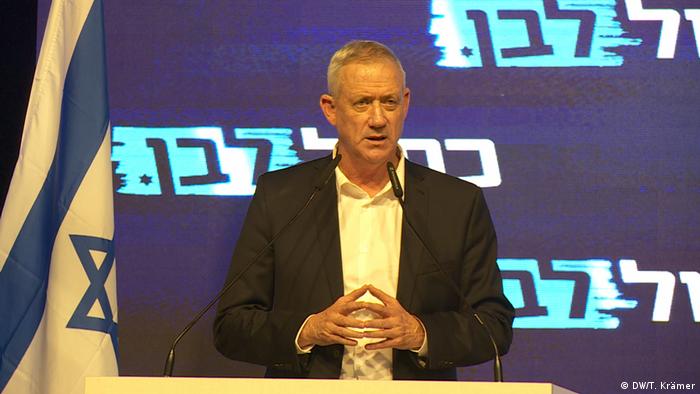 Gantz is running neck-and-neck with Netanyahu

"The top issue on Israeli minds in terms of public opinion research is the economy. People care about the cost of living and social and economic inequality. And now, security comes second. Whenever there is a war, security comes first," public opinion expert Dahlia Scheindlin said. However, these issues are not at the forefront of this election. "We are in a situation where voters are focused primarily on Netanyahu's governance, 13 years in total, and the corruption charges against him."

Netanyahu is considered Israel's most polarizing figure, with staunch supporters on one hand, and serious anti-Bibi opposition on the other. To counter such dynamics, the Likud party ran an aggressive social media campaign against Gantz, labeling him a "weak leftist" who would bring the Arab Israeli parties into government. Netanyahu received campaign help from foreign leaders such as Russian President Vladimir Putin and US President Donald Trump, who recently recognized Israel's sovereignty over the occupied Golan Heights.

Netanyahu's message is simple: Only he can run the country, keep Israel safe and deliver on international diplomacy. "Israelis are like smokers who would really like to quit but don't believe they can function without the constant dose of nicotine," wrote Ha'aretz newspaper journalist Anshel Pfeffer, who is also the author of Bibi, a biography of Benjamin Netanyahu.

"It's not just Netanyahu who has created such a compelling narrative for his indispensability. It's his opponents on the center-left who have lost their narrative." For example, the Labor party hopes to attract voters with a dynamic list of young politicians, but the left-wing bloc is struggling in a society that has moved further to the right in recent years.

Ilana Binyamin, who runs a grocery store in Jerusalem, said she didn't vote in the last elections because there was no serious competition for Netanyahu. This time, she feels compelled to support the prime minister.

"We are faced with crucial decisions on Iran, Hezbollah and Hamas. I raised two boys who were in combat units in the army, and I didn't sleep at night. Maybe the rest of the world doesn't understand it, but I think Netanyahu is taking careful steps. The rest of the candidates don't have the experience and maturity as leaders," she said, adding that she's not bothered by the corruption accusations against him as long as he delivers for the country. Her view is echoed by other Likud supporters. "He made it possible that Arab leaders love him," says Itzik Ben Tzvi, who works in real estate. "Look at Trump. He gave Israel everything, the embassy in Jerusalem, the Golan Heights. Only Bibi can do that."

Though the outcome is still too close to call, Netanyahu might just gain the upper hand to form a coalition with smaller right-wing and religious parties to hold the required 61 of the 120 Knesset seats.

But there is also a block of undecided voters. Pollsters believe that 12% to 15% of voters have yet to make up their minds.

One of them is Natalie Yazur, who is looking at flyers at the campaign stall of the new ultranationalist Zehut party in Jerusalem's market area. "They raise some issues I can connect with, but I am not sure I'd vote for them," she said. "As a young couple, we cannot afford to buy an apartment. I'd like the next government to take care of our interests."

She initially thought about voting for Gantz, but might end up voting for Netanyahu after all. "You can hear it around me," she said, referring to the people nearby shouting "only Bibi." "My parents vote for Bibi. For most people here, it's only Bibi."