Fact check: Myths about ballot ′fraud′ at German election polls | Germany | News and in-depth reporting from Berlin and beyond | DW | 26.09.2021

An open padlock on the ballot box as Armin Laschet voted, and claims of a broken seal at another — the German election has faced accusations of election fraud. DW looks into these claims.

Poor form — or against the rules?

German citizens cast their ballots for the German election on Sunday — but it was the vote of chancellor candidate Armin Laschet of the center-right Christian Democrats (CDU) that set social media buzzing after he broke the secret ballot system by folding his ballot paper incorrectly while casting his vote.

But observers with a keen eye also noticed another detail: The padlock on the ballot box was not properly secured.

But do ballot boxes need to be locked with a padlock? No, according to a spokesperson for the Bundeswahlleiter, or Federal Returning Officer, which is responsible for overseeing the German elections. "The ballot boxes must be closed, but it is not legally stipulated in what form they must be closed," spokesperson Florian Burg told DW. Padlocks are not required on ballot boxes, so an open lock, therefore, is not a violation, he added.

Section 51 of the Federal Election Regulations states: "The ballot box must be provided with a lid. [...] It must be closeable."

The same approach applies to seals on ballot boxes: The seals are not required and, therefore, any broken seals do not contravene electoral laws.

Ballot box seals became a topic of concern on social media after a Twitter user posted a photo of a broken election seal and called it "election fraud." 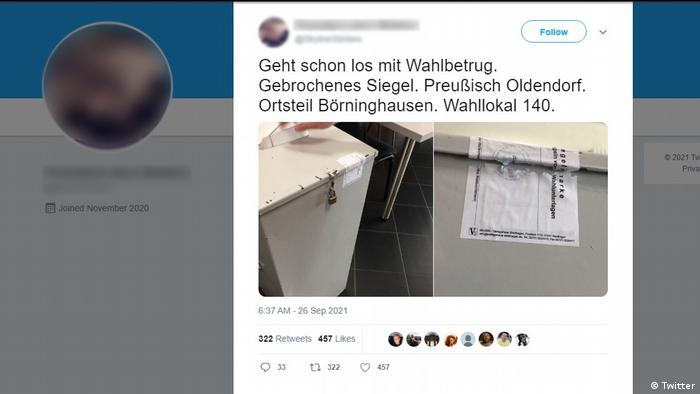 But the accusation was contradicted by the spokesperson for the Federal Returning Officer. "There is no standard ballot box. In this respect, it is only regulated how large it must be, but not how it must be closed. Seals are not a requirement." The statement is buttressed by federal election regulations available on the website.

The tweet referring to the broken seal said it was found at a ballot box in the town of Preussisch Oldendorf, in the German state of North Rhine-Westphalia.

The town's mayor, Marko Steiner, confirmed that the team at the polling station had been made aware of a broken seal and investigated the matter. The result: it was an old seal from a previous election that had not been removed "for whatever reason," Steiner said.

City officials weren't able to find out from which election exactly the seal was from.

Similar to the spokesman for Germany's top election official, Steiner said the regulations stipulate that the ballot must be closed.

"According to the ordinance, the ballot box has to be closed. That's usually with a lock in our city," he said. The Twitter photo of the broken seal also shows a small padlock.

Steiner added that the election official once again confirmed that it had checked the ballot box before voting began. It was empty and locked with a padlock afterward.

According to the mayor, the election official kept the key until the polling stations were closed, suggesting the ballot boxes were not tampered with.

Shortage of ballots in Berlin

Hundreds of voters queuing up in Berlin were still waiting to cast their ballots past 6 p.m. because some polling stations had run out of ballots. The delay in getting more ballots was possibly due to the Berlin Marathon, which includes road closures throughout the German capital.

The wait prompted some social media users to claim election fraud: If there were not enough ballots, some believed, then not everyone can vote — and the votes may not be counted since people would be waiting past 6 p.m., when polling stations close.

These claims are incorrect. People already lining outside the voting premises are still allowed to vote — even after the 6 p.m. deadline.

Burg clarified: "If you're still in line, you're still let in. Everyone who is in line is still allowed to vote. The queue counts as being part of the polling station." This rule is also codified in the federal election regulations.

In the run-up to the election, representatives of the far-right Alternative for Germany (AfD) party had already expressed doubts about the legitimacy of the postal voting —  echoing the narrative that former President Donald Trump and fellow Republicans shared during the US election campaign in 2020. Many Germans have opted for postal voting due to the pandemic.

After the German polls closed, allegations of postal ballot tampering were also made the rounds on social media — but without any evidence.

One user on the messaging platform Telegram, for example, attributed the AfD's slump in two exit polls to inconsistencies in postal voting: "It was the same in America, postal votes stand for fraud," wrote the anonymous account on Telegram.

But these claims are false. According to the federal election regulations, postal ballots are counted by postal ballot officials and are protected against tampering through several measures. The AfD's own election campaign sought to deter postal voting ("Put it in yourself!") and called on supporters to vote locally.

Analysts, therefore, expected a fewer number of postal ballots among AfD voters when compared to other parties.

Yes, the AfD was on the ballots

Allegations of election tampering and influencing also arose in the city of Göttingen, when a photo on social media appeared to show the AfD party was missing from voters' ballots. Users suggested this was evidence of voter fraud, withone user criticizing: "Many could not vote at all because they wanted to vote AFD, but this was not on the ballot paper in several cities. In Göttingen, for example."

But this claim is wrong.

While the AfD was indeed missing on the list, it was not the ballot used by voters. The omission was an error in the counting lists used by election volunteers and officials. The list did not initially include the AfD, but the city's election manager, Erik Fessler, told the Göttinger Tageblatt that the error was noticed earlyon election day — and the counting lists were exchanged before 6 p.m. (when polls close and votes are counted) in all 111 polling stations. So the counting lists arrived before the end of voting — and in time for the official count, according to the official. So German voters all had AfD as an option on their ballots, and their votes — including those supporting the AfD — were counted.

This article has been updated since publication with additional claims.