One of the candidates who could end up being Germany's next chancellor folded his ballot incorrectly, accidentally revealing to the world who he had voted for. Officials have said his vote is still valid. 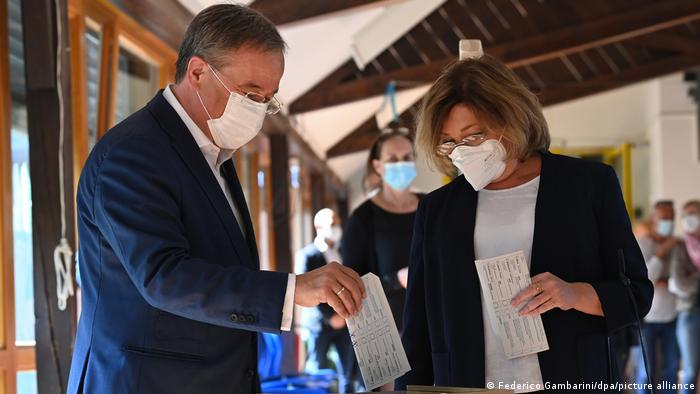 Armin Laschet accidentally revealed his supposedly secret ballot, showing that he had voted for his center-right CDU party

The chancellor candidate for Angela Merkel's center-right Christian Democrats (CDU), Armin Laschet, sparked a last-minute controversy on Sunday while casting his ballot for the Bundestag election from his hometown of Aachen in western Germany.

Pictures shared widely on social media showed the conservative candidate incorrectly placing his ballot into the box. According to the German Federal Returning Officer, ballots must be folded in such a way so as to hide what the voter marked.

As can be seen in the photos, however, Laschet had folded his paper the wrong way around, leaving it clear to see that he had, unsurprisingly, voted for the party he is leading.

The way Laschet voted contravened the system of the secret ballot. The local returning officer should have prevented the ballot from being cast.

DW's fact checking team contacted the Federal Returning Officer to clear up the issue, who tweeted that a "well known politician voted, as expected, for his own party." They concluded that they could not see any attempt to influence the election in the mistake.

The returning officer went on to explain that in the case that someone mistakenly folds their ballot the wrong way, then they should be given a new one, but "if the ballot paper is already in the ballot box, it can no longer be picked out and is valid."

A history of errors

The CDU leader, who currently serves as the state premier for North Rhine-Westphalia, Germany's most populous state, voted shortly after his leading rival for the top job, Olaf Scholz from the center-left SDP.

Laschet, who is hoping to replace outgoing chancellor, Angela Merkel, committed several gaffes during his campaign. In one instance, he was caught laughing in the background while President Frank-Walter Steinmeier was speaking to TV from the scene of devastating floods in western Germany earlier in the year.

Under Laschet, the CDU has seen its popularity in pre-election polls fall to historic lows. This allowed the SPD to overtake the conservatives for the first time in 15 years. Nevertheless, in the last polls before election day, Laschet's party clawed back a few percentage points, leaving the outcome still wide open.

"It will come down to every vote," he told reporters after, incorrectly, casting his vote on Sunday.

Armin Laschet: 'It's a close call and every vote counts'