The CDU's chancellor candidate Armin Laschet apologized for his "inappropriate" laughter while Germany's president spoke at the scene of disastrous floods. Laschet is the current frontrunner in the September election. 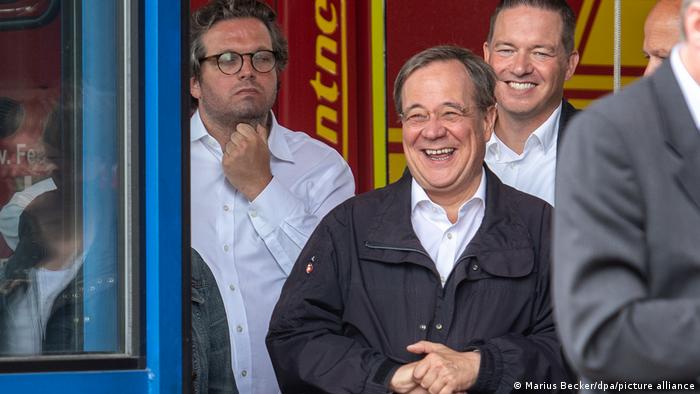 Armin Laschet, the premier of North Rhine-Westphalia and chancellor candidate of Angela Merkel's center-right CDU, was heavily criticized on Sunday for laughing in one of the towns that was devastated by the recent floods.

The veteran CDU politician was caught in the background of a video of German President Frank-Walter Steinmeier speaking to reporters in Erfstadt, one of the worst-hit areas that was the scene of dramatic rescue efforts.

As Steinmeier gave a statement to reporters, Laschet and a group of others could be seen standing around in the background engaged in conversation with the state premier laughing enthusiastically.

Laschet apologized on Twitter, saying his behavior had been "inappropriate."

''The fate of those affected, which we heard about in many conversations, is important to us,'' he wrote. "So I regret all the more the impression that arose from a conversational situation. That was inappropriate and I am sorry,'' the CDU politician said.

German newspaper Bild reported that Laschet and his companions could not hear what Steinmeier was saying, as the audio did not reach them.

But outrage poured on social media and in the Sunday papers, as a distraught country reeled from what Merkel called a "catastrophic" situation in the flood areas.

The hashtag #Laschetlacht (Laschet laughs) was a top trending topic on Twitter and the incident was discussed across German media.

Opposition parties heavily criticized the center-right chancellor candidate. "The way Armin Laschet is joking around in the background while President Frank-Walter Steinmeier is speaking to victims is without decency and outrageous," Lars Klingbeil, secretary general of the Social Democrats (SPD), told German newspaper Bild am Sonntag.

Although the SPD are currently in a grand coalition with the Merkel's CDU, they are running against them in the September 26 polls.

"They say that in times of crisis, one's true character reveals itself," Klingbeil told the newspaper, adding that Laschet had "disqualified himself."

The liberal FDP party also attacked him, with deputy parliamentary leader Michael Theurer saying that "fooling around without a mask while the president remembers the victims does not do justice to the seriousness of the situation."

Frontrunner in race for chancellor

Recent opinion polls had put Laschet well ahead in the race to become chancellor this September, with his conservative bloc having a near 10-percentage-point lead over the Greens.

The Greens' chancellor candidate Annalena Baerbock had initially taken the lead but faltered after controversies regarding possible plagiarism in her CV and her book. The allegations appeared to have hurt her standing in the polls.

Her party has put climate change front and center in their agenda to govern Germany. With experts linking the climate crisis to extreme weather events like this month's devastating floods, the topic is likely to be revived on the campaign trail.

Laschet has been accused of not pursuing environmentally friendly policies at the state level in North Rhine-Westphalia, but in response to the floods he said he supported speeding up efforts to combat climate change.