Germany′s floods bring climate policy into focus in election year | Germany | News and in-depth reporting from Berlin and beyond | DW | 16.07.2021 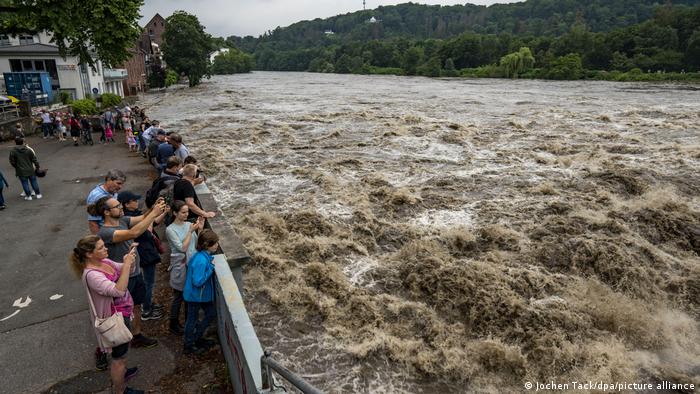 Onlookers marveled at the seemingly unprecedented amounts of water in Lake Baldeney, near Essen

When the storm and floods hit the west German states of North Rhine-Westphalia and Rhineland-Palatinate this week, Germany's top politicians were on the ground quickly.

All three of the main parties' candidates to replace Angela Merkel as chancellor in this September's election dropped everything to go to the region — the center-right CDU's Armin Laschet,the Greens' Annalena Baerbock and center-left SPD's Olaf Scholz.

The behavior of politicians at flooding sites has been decisive in German election campaigns before. In 2002, then-Chancellor Gerhard Schröder of the SPD was immediately on the scene when the Elbe River burst its banks and caused immense suffering.

Floods leave many without homes, electricity

Scientists have linked the extreme flooding to climate change, leading to fresh scrutiny of the candidates' climate policies.

Laschet, in particular, has faced heavy criticism in recent days. The CDU emphasizes the importance of climate protection in its election manifesto, but critics have long accused the state premier of fighting for a late phaseout of coal.

The current federal government is considering a coal phaseout for 2038 at the latest, out of consideration for the workers in opencast lignite mines. This is too late for the climate, environmental groups have said. They point out that carbon emissions caused by coal production have been linked to the warming of the atmosphere, directly leading to extreme weather events like the disastrous flooding. The Greens, for their part, want a coal phaseout by 2030.

For Laschet, the topic is an emotional one: He nearly lost his cool on German TV channel WDR Thursday evening when asked about the coal phaseout by the host.

"Excuse me, just because of a day like this, you do not change the policy," said the chancellor candidate — a response that may linger with him for a long time. 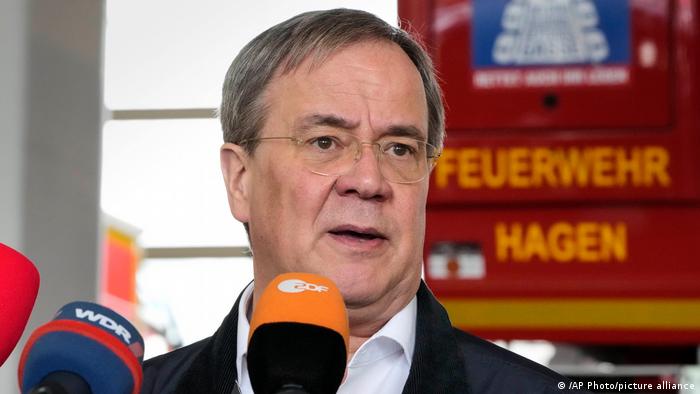 Laschet, hoping to replace Merkel as chancellor, has been reluctant to speed up the phaseout of coal

Germany wants to be carbon neutral by 2045

The coal phaseout is not the only contentious issue around climate policy. Germany and the EU have improved their climate targets; Germany wants to be carbon neutral by 2045.

But when it comes to concrete measures, the parties' plans diverge. The CO2 price of €25 ($29.50) per metric ton on emissions from transport and heating fuels, which was set in January, is to rise step-by-step up to €55 in 2025, according to the plan of the current governing parties. But the Greens are calling for a price hike up to €60 by 2023, which has already brought them fierce criticism during the election campaign, especially from business representatives.

But all the parties in the Bundestag, with the exception of the right-wing populist Alternative for Germany (AfD), are committed to the requirements of the 2015 Paris Agreement not to let global warming increase by more than 1.5 degrees Celsius (2.7 degrees Fahrenheit) from 1990 levels.

AfD member of parliament Karsten Hilse, who is responsible for climate, told the newspaper Welt: "Floods and inundations are natural phenomena." He claimed human-caused emissions do not play a role, not even in the current catastrophe.

The AfD is largely alone with this opinion; human responsibility for climate change and extreme weather events is no longer disputed by anyone in the established parties. The recent extreme summer heat in Central Europe — hot days over a long period with hardly any cooling at night, along with heavier and more frequent rainfall — has quietened mainstream naysayers. 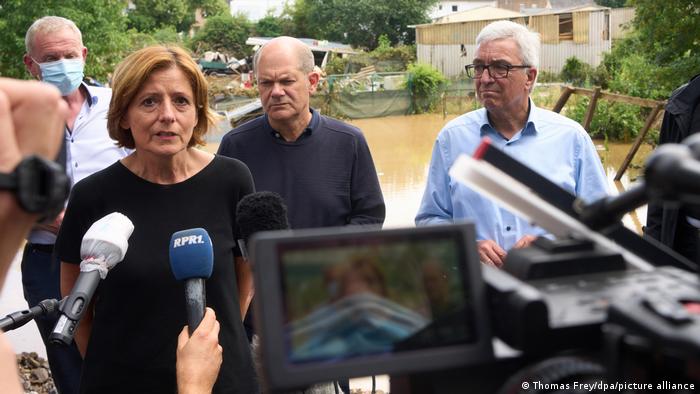 In terms of concrete aid for those affected by the disaster, the government wants to be guided by the sums that were paid in 2013 after the floods on the Elbe and Danube, which added up to over €8 billion. As early as next Wednesday, Interior Minister Horst Seehofer hopes that the federal cabinet will pass a resolution to this effect.

Laschet said Thursday evening on ZDF TV that roads, bridges and infrastructure must now be quickly reopened. What is needed, he said, is "a national show of strength so that the worst things are quickly remedied."

Following the floods on the Oder, Elbe, Danube and Rhine between 1997 and 2013, there has certainly been a change in thinking about the major rivers themselves. Flood plains have been created, building in the immediate vicinity of rivers is no longer so easy and dikes have been reinforced.

But in the current floods, smaller streams also burst their banks and became raging rivers. In addition, creating flood plains and removing buildings near rivers is not feasible for many of the affected small towns and villages. And ever-increasing urbanization is covering land in asphalt and concrete, preventing natural runoff.

In 2017, the current government decided to reduce daily land consumption in Germany to 30 (74 acres) hectares by 2030. At present, however, it is still 52 hectares, which corresponds to an area of around 72 soccer fields.

And if there is no reversal of the trend in sight, all parties may need to step up their game and rethink their approach to flood protection.

The European Commission will ask financial institutions to work with the European Central Bank to reduce emissions. Natural gas will replace coal as the fuel of choice.