Fatal flooding in western Germany and neighboring countries — as it happened 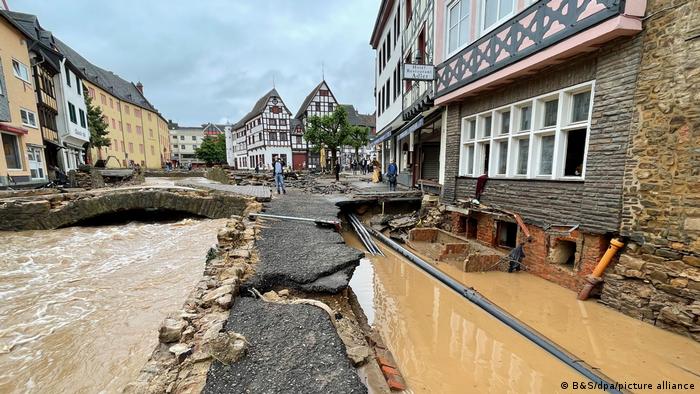 This live updates article has closed.

This article was last updated at 0430 UTC

At least 58 people have died in parts of western Germany amid heavy rains and flooding, local police said on Thursday. Most of the deaths have been reported in the states of North Rhine-Westphalia and Rhineland-Palatinate.

The flooding has heavily impacted transport in the region, which lies near the borders to Belgium, Luxembourg, France and the Netherlands. Weather forecasters say more rain is expected in the coming days.

A residential area in the city of Wangen im Allgäu in the German state of Baden-Württemberg suffered severe flooding late on Thursday evening.

The banks of a nearby river had burst, causing the district to flood.

According to the emergency services, the water in the residential area had infiltrated into several cellars as well as garages.

A dam in the heavily hit Eifel district of Germany has overflown, prompting fears of further flooding in the coming hours, local authorities said.

The 77.2-meter-high (253 feet) Rur Dam has overflown, meaning there could be worse flooding further along the Rur river (separate from the more-northern Ruhr River).

Villages near the dam have already been evacuated, but the warning has now been extended along the river to towns including Heimbach, Nideggen, Düren, Jülich, Linnich, Kreuzau, Hürtgenwald and Niederzier. The power company has warned it may switch off the power as a precaution.

German Chancellor Angela Merkel and US President Joe Biden addressed the disaster as they held a joint press conference in the White House.

Merkel said "it is a day that is characterized by fear, by despair and suffering" as "small rivers turned into flooded, devastating torrents."

"I extend my empathy and my heart goes out to to people who lost loved ones," Merkel said. "I include Belgium, Luxembourg and the Netherlands."

"I fear the full extent of this tragedy will only be seen in the coming days," she said.

She thanked rescuers for their tireless efforts.

Biden offered his condolences over the deadly floods. "Our hearts go out to the families who've lost loved ones," he said.

About 1,300 people are unaccounted for in the German district of Bad Neuenahr-Ahrweiler, according to the regional administration.

The mobile phone network is down, so authorities are hoping that people are simply unreachable due to communication problems.

"We hope it will be clarified," a spokeswoman for the district in Rhineland Palatinate state said. She also confirmed an increased death toll, but did not give a specific figure.

She said that more than 1,000 emergency service employees were still working, including the fire brigade, police and armed forces.

About 3,500 people are in emergency accommodation.

The death toll from the flooding in Belgium has risen to nine people, according to Belgian news agency Belga.

"We assure all those affected as well as the local authorities of our full support," Prime Minister Alexander De Croo tweeted.

In Belgium's fourth most-populated city, Liege, residents living on the Meuse river have been asked to leave their homes. The city has also witnessed electricity outages and cuts in gas and water supplies.

Rhineland-Palatinate state premier Malu Dreyer has ordered all official buildings to fly their flags at half-mast in memory of the victims.

"We haven't seen a [natural] disaster like this, it's just devastating," Dreyer told the regional parliament on Thursday.

At least 28 people have died from the flooding in Rheinland-Palatinate. Nine of the victims were residents of a facility for people with disabilities in the town of Sinzig

In addition to the rising death toll, around 165,000 people in western Germany have been left without power due to the floods, according to energy provider Eon.

The military is using at least 11 helicopters in total to rescue people who are trapped by the floods. The soldiers are also using armored vehicles, boats and ambulances to carry out rescue operations.

DW reporter Kate Martyr, who visited the hard-hit Ahr region on Thursday, said rescue and cleanup teams think it may take weeks to recover from the flooding.

Russian President Vladimir Putin told Merkel and German President Frank-Walter Steinmeier in a telegram to share his "sincere condolences" to families affected by the flooding.

The Russian region of Krasnodar Krai declared a state of emergency earlier this month due to torrential rain. The flooding killed several people and impacted the major Black Sea city of Sochi.

North Rhine-Westphalia state premier Armin Laschet visited the town of Hagen, which had been heavily impacted by the flooding. 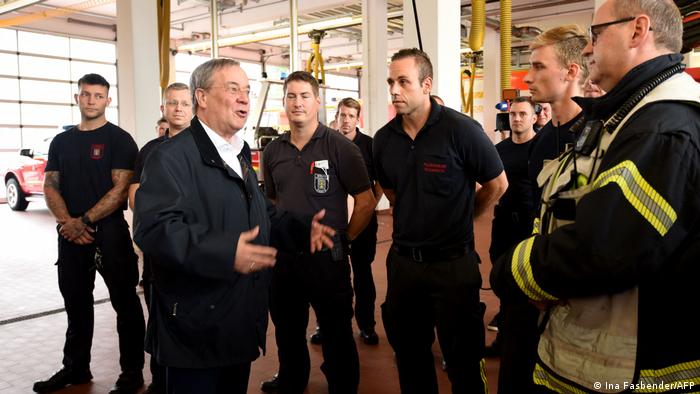 Laschet met with firemen while on his visit to Hagen

"We will stand by the towns and people who've been affected," Laschet told the media while wearing rubber boots.

Laschet is the Christian Democrats' candidate to succeed Merkel as chancellor after September's general elections in Germany. He called off a party meeting in Bavaria to take a tour of the damage.

Laschet has blamed the extreme weather on global warming.

"We will be faced with such events over and over, and that means we need to speed up climate protection measures, on European, federal and global levels, because climate change isn’t confined to one state," he said.

While on a visit to Washington D.C. on Thursday, Merkel promised federal help for the flood victims. The chancellor said she had spoken about the issue with Finance Minister Olaf Scholz on how to best help those affected by the catastrophe.

"You can rely on the fact that our state, at the federal, regional and communal levels, will do all it can to save lives, avert dangers and alleviate suffering in the most difficult conditions," Merkel said.

The floods in neighboring Belgium have killed at least four people, according to authorities. The Vesdre river flooded the eastern town of Pepinster, destroying homes.

A 15-year-old girl has been reported missing. 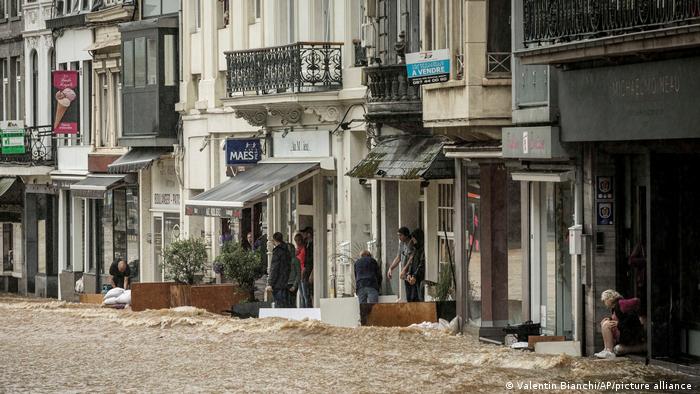 Cologne police said at least 20 people have died in the Rhineland region, 15 of them in the town of Euskirchen to the south of Cologne.

That brings the tally across the country reported by police past 40.

Koblenz police also said that at least 18 people in the Bad Neuenahr-Ahrweiler area in Rhineland-Palatinate had died in the floods.

"Unfortunately, we have to confirm that the number of fatalities in connection with the flood disaster in the Bad Neuenahr-Ahrweiler area has now risen to a total of 18. Our deepest condolences go out to all concerned," the department tweeted.

More than 70 were missing in the same region, police said, after the Ahr River that flows into the Rhine burst its banks and brought down half a dozen houses.

Several also went missing after six houses collapsed in the same state, following hours of torrential rain. About 25 more buildings in the Schuld region were at the risk of caving in, local police said.

"We currently have an unclear number of people on roofs who need to be rescued," said a spokesperson for the Koblenz police. Reports suggest about 50 people have been trapped on roofs to escape the flooding.

"There are many places where fire brigades and rescue workers have been deployed. We do not yet have a very precise picture because rescue measures are continuing," the spokesperson said.

"There is chaos here. There's mud everywhere, there's police, there's rescue teams. It's a very high emergency situation here that no one was really expecting," she added. "I spoke to one man who spent the night on his house. He had to climb up a drain pipe to escape rising water and spend the night on the house."

DW reporter Marie Sina visited the town of Heimerzheim in North Rhine-Westphalia, where several homes were flooded overnight. "I spoke to local residents who were evacuated by rescue boat in the early morning hours. The water flooded the entire basement and ground floor of their houses. Many fear they won't be able to live in their homes for the coming months," she said.

"The Swist, usually a 2-meter wide river, completely overflowed at around 3 a.m. today. Within minutes, homes in Heimerzheim were flooded," Sina added.

Meanwhile, German Chancellor Angela Merkel offered her condolences to the families of victims, in a statement tweeted by government spokesman Steffen Seibert.

"I am shocked by the disaster that has affected so many people in the #Hochwasser Areas have to suffer because of. My condolences go out to the relatives of the dead and missing. I thank the many tireless helpers and emergency services from the bottom of my heart."

Rescue personnel among the dead

As emergency workers struggle to evacuate people, two firemen were killed in the line of duty in the towns of Altena and Wedohl in North Rhine-Westphalia. Two men, aged 77 and 82, died as their basements flooded in the cities of Kamen and Wuppertal, police said.

Rhineland-Palatinate’s Vulkaneifel district was forced to declare a state of emergency as several areas were not accessible due to the torrential rain.

"The situation is very serious, we have many flooded roads and villages that are no longer accessible," District Administrator Julia Gieseking said from the town of Daun late Wednesday.

The German Army sent over 230 soldiers and heavy machinery to help clear streets affected by flooding. The troops were deployed along with heavy equipment and armored vehicles in North Rhine-Westphalia, which saw some of the worst torrential rain, a Defense Ministry spokesman said in Berlin.

In the neighboring state of Rhineland-Palatinate, at least 70 soldiers were on the road, with large multi-purpose vehicles capable of traversing high waters to reach flooded villages. Four rescue and transport helicopters were also deployed.

The company’s grid supplies around 7.5 million in large parts of North Rhine-Westphalia and Rhineland-Palatinate with power, gas, water and heat.

"We are trying to resolve the situation with all available hands on deck," a spokesperson for the company said in response to an inquiry.

Flooding also disrupted the supply of drinking water in the town of Eschweiler, near the city of Aachen.

The floods have caused Germany's worst mass loss of life in years. In 2002, flooding killed 21 people in eastern Germany and over 100 across the wider central European region.

The German Weather Service has warned that southwestern parts of the country could expect heavy rainstorms on Thursday, with continuous downpour until Friday evening.

"We haven't seen a disaster like this. It's just devastating," Rhineland-Palatinate’s state premier Malu Dreyer told the regional parliament, which held a minute's silence for those affected by the floods.