Chancellor Angela Merkel is in the US for probably the last visit before she leaves office, as severe flooding engulfs parts of western Germany. Nord Stream 2 was a key topic in her talks with President Joe Biden. 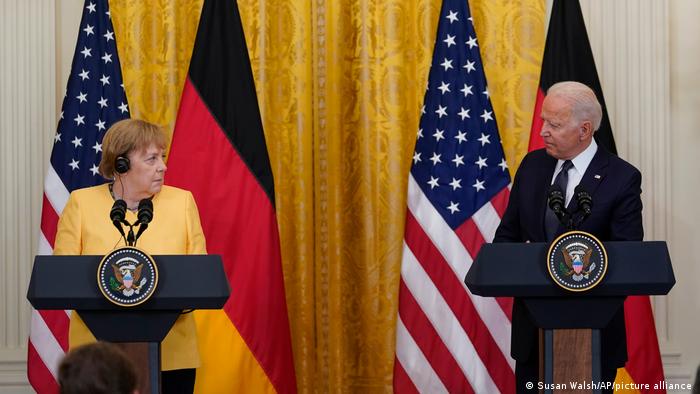 These live updates have now closed.

German Chancellor Angela Merkel and US President Joe Biden hosted a joint press conference on Thursday, during which both made a clear commitment to their transatlantic partnership as Merkel enters the final months of her tenure.

A number of topics were under discussion during talks at the White House, such as the Nord Stream 2 project, COVID-19 travel restrictions and ongoing concerns over Russia and China.

President Biden is becoming increasingly concerned over the actions of China in Hong Kong, where Beijing continues to make moves aimed at weakening the region's democratic freedoms.

"The situation in Hong Kong is deteriorating and the Chinese government is not keeping its commitment it made... how it would deal with Hong Kong."

Merkel on Afghanistan and Sahel

With more than 90% of the US withdrawal from Afghanistan complete, Merkel said Germany's partnership there "has been good," albeit with some regrets as "unfortunately we have not been able to build a nation as we would like it to look."

But there have been positives. Merkel said: "Over many, many years we have served together in Afghanistan, been able to contain, to a certain degree, terrorist dangers."

The Sahel region of Africa was also under discussion, as "terrorism is on the rampage," there, Merkel said. "And obviously for us in Europe this is a great challenge. And also for the countries on the ground. We are very grateful to the United States for their mission in order to contain, and push back, against these terrorist advances."

Merkel keen for consensus over China

Germany has strong trade ties with China and, therefore, Merkel was keen to extol the virtues of cooperation with Beijing on issues such as climate change and the coronavirus pandemic.

Merkel is keen for a coordinated response from the West in its dealings with China over labor rights, trade and cybersecurity, but that communication needs to "be based on the common values" of the US and Germany, she said.

Merkel thanks US over Germany reunification

Merkel expressed her gratitude over the United States' "outstanding contribution" to Germany's reunification, adding she was also thankful on a personal level.

"No two regions in the world are linked by such depth and breadth of shared interests and values as Europe and North America."

President Biden said his administration is currently reviewing when it will be able to lift restrictions that ban most non-US citizens from traveling to the US from much of Europe.

"It's in process now," Biden said of the possibility of lifting restrictions. He said he expects to be able to answer "within the next several days what is likely to happen... I'm waiting to hear from our folks in our COVID team as to when that should be done."

Merkel said: "It has to be a sustainable decision. It is certainly not sensible to have to take it back after only a few days."

US will not send troops to Haiti

President Biden said the United States will bolster security at its embassy in Haiti following last week's assassination of that country's president.

Biden noted Merkel had been to the Oval Office many times during her 16 years as chancellor and called her "a great friend, a personal friend, and a friend of the United States."

"I value the friendship," Merkel responded.

The United States and Germany are united in helping eastern European nations against Russian aggression and agree that Moscow must not be allowed to use energy to bully its neighbors, President Biden told reporters.

"And while I reiterated my concerns about Nord Stream 2, Chancellor Merkel and I are absolutely united in our conviction that Russia must not be allowed to use energy as a weapon to coerce or threaten its neighbors."

The nearly completed Nord Stream 2 pipeline is a delicate issue as it will bring Russian gas to Germany. Washington has long opposed the project, saying it could undermine Europe's energy security by making it too dependent on Russia.

Moscow is racing to finish the pipeline that would deliver gas to Germany, bypassing Ukraine, and depriving Kyiv of valuable transit fees, potentially undermining its struggle with Russian aggression.

Merkel sought to downplay any differences between the US and Germany on the issue, wishing to stress that the pipeline was in addition to, and not intended to displace, Ukrainian pipelines.

"Our idea is and remains that Ukraine remains a transit country for natural gas, that Ukraine, just as any other country in the world, has a right to territorial sovereignty,'' Merkel said.

Merkel added that Germany stood ready to react to Moscow "should Russia not respect this right of Ukraine that it has as a transit country."

Merkel: 'We must join forces and bundle our strength'

The Chancellor began the briefing by addressing the problems back home, as western Germany suffers its worst floods since World War II.

"It is a day that is characterized by fear, by despair and suffering. Small rivers turned into flooded, devastating torrents."

"My empathy and my heart goes out to to people who lost loved ones. I include Belgium, Luxembourg and the Netherlands."

Biden began the briefing by offering his condolences to the German people over the flooding that has cost dozens of lives.

The president also expressed his appreciation of the work Merkel has done during her tenure, which is set to come to an end when Germany elects a new chancellor in September.

"Under your chancellorship, the friendship and cooperation between Germany and the United States has grown stronger and stronger," Biden said.

And even though Merkel is departing, Biden is confident relations between the two nations "will continue to grow stronger," but, he said, "I will miss seeing you at our summits."

Earlier she received an honorary doctorate at Johns Hopkins University.

Speaking at the University, Merkel said how a difficult past 18 months during the coronavirus pandemic had showed "that in everything we do, in everything we think, we must prepare for the unexpected."

Merkel's trip has been overshadowed by the unexpected: major flooding back in Germany, with dozens dead and more missing, mainly in the western states of North Rhine-Westphalia and Rhineland-Palatinate.

You can follow all the latest on the German and European flooding here, while this story will provide updates on Merkel's movements stateside.

German leader Angela Merkel arrived at the White House, shook hands with US President Joe Biden and went straight into meetings which DW analysts believe will center on the pandemic, global security and climate change.

DW's Washington Correspondent Ines Pohl said Merkel knows Joe Biden "very well" from his time as Barack Obama's vice president, so his election is a welcome return of "diplomacy" to the White House after the Trump era.

DW political analyst Melinda Crane said that Merkel would be looking to "truly stabiliize people's trust in democratic institutions" during talks with Biden before she steps down as chancellor.

What is on Thursday's agenda?

Earlier in the day she had a working breakfast with US Vice President Kamala Harris, with the pair posing for photographs at the US Naval Observatory. 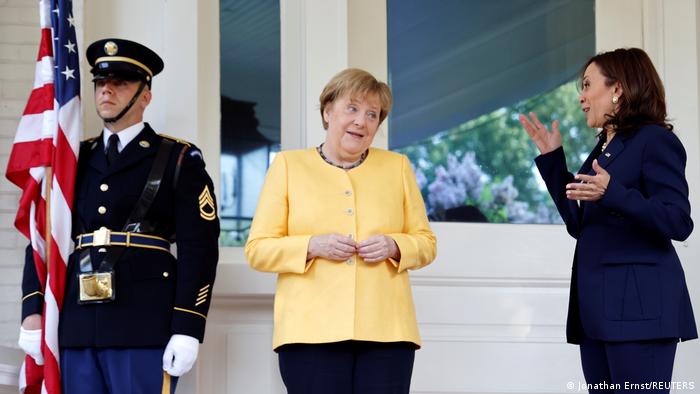 Although DW experts do not expect a major policy shift during this trip,Russian gas pipeline Nord Stream 2 and COVID-19 vaccines patent waivers could feature in this afternoon's talks at the White House.

Merkel's visit coincides with a storm front and severe summer flooding in western Germany and the border region around the Benelux countries and eastern France.

"I mourn for those who have lost their lives in this catastrophe," she told reporters. "We donꞌt know the number yet but there will be many, some in the basement of their houses and some as firefighters trying to bring others to safety. My deepest sympathy goes out to their families."

The CDU's candidate to succeed Merkel after September's elections, Armin Laschet, currently leads one of the worst-affected states, North Rhine-Westphalia. He canceled a party event scheduled for Thursday in Bavaria so he could survey the damage.

Merkel said that "for 18 months the world has been in the grip of this virus," which had caused many changes.

"What the pandemic shows us is how little is certain, even those things we take for granted. It teaches us that in everything we do, in everything we think we must prepare for the unexpected," she told the audience at Johns Hopkins University.

The chancellor said that the way the university teaches students to think independently was different to the way she was brought up in East Germany, going on to explain why she had chosen a life in academia in the sciences as a young woman in the former GDR:

"Physics was and remains a subject where the laws of physics are determined by nature and not by some state apparatus," she said. "Even the East German regime could not change that."

She said she would "always be grateful" for the help of the United States to unite Germany after the fall of the wall in 1989. Merkel honored as 'doctor of humane letters' by JHU

Merkel focused in particular on the pandemic and JHU's role in tracking cases worldwide during her acceptance speech at the university in Baltimore, near the capital.

University delegates praised Merkel as they bestowed the establishment's highest honorary award on her. The 14th president of the university, Ronald J. Daniels said that Merkel had been one of the few world leaders to grasp the danger of the growing coronavirus pandemic.

Daniels said "accountability and transparency, clarity of expression and a profound care for individual and collective life," were attributes that had shone during her almost 16-year tenure.

Merkel spoke of the "excellent work" done by the university during the pandemic. "This university has always dedicated itself to truth," she said.

This is a developing story and will be updated.

Germany's most populous state, North Rhine-Westphalia, is in shock. Entire municipalities there have been evacuated, including Heimerzheim, a town of 6,000.