Germany's neighbors have been similarly hit by devastating floods. Along the Maas River, thousands of residents have been urged to vacate their homes. 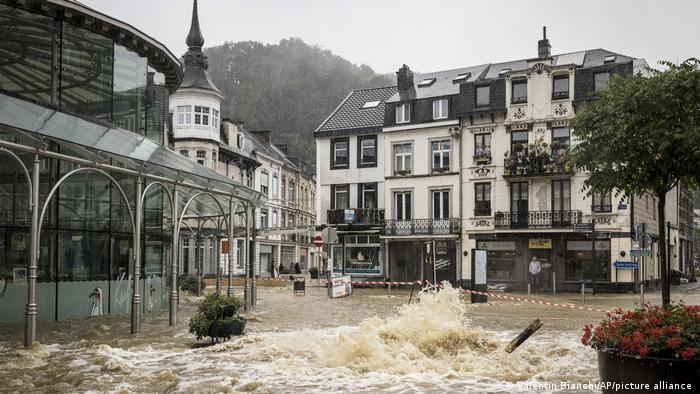 As Germany counted its losses from heavy flooding on Friday, neighboring countries were similarly affected.

King Willem-Alexander and Queen Maxima also visited the hard-hit town of Valkenburg, east of Maastricht, where floodwaters had inundated homes and businesses.

In adjacent Belgium, where the Vesdre River had spilled its banks at Pepinster in the Walloon region, three elderly people were missing after a small rescue boat used by firefighters capsized.

"Unfortunately, they were quicky engulfed," said Mayor Philippe Godin. "I fear they are dead."

Highways were still inundated in southern and eastern parts of Belgium. Trains were halted, with Luttich's rail station closed from midday Thursday.

All municipalities along Belgium's Meuse River were evacuated after flooding around Limbourg, according to local reporters.

Luxembourg set up a crisis panel  to respond to emergencies triggered by heavy rains.

Prime Minister Xavier Bettel said "several homes" had been flooded and were "no longer inhabitable".

In northeastern France, rainwater ﬂooded vegetable fields, many homes, and a World War I museum at Romagne-sous-Montfaucon. Firefighters evacuated people from campgrounds.

The Aire River rose to its highest levels in 30 years in some areas, reported L'Est Republicain newspaper.

Mojib Latif, a veteran German climatologist based at the Geomar Helmholtz-Center said industrialized society's ability to adapt to weather fluctuations was nearing breakdown.

Historically human beings were used to relatively stabile climatic conditions, but weather events were now  happening at a speed "that has never occurred before" Latif told Friday's edition of the Neue Osnabrücker Zeitung newspaper.