Brussels has outlined its plan to reach a 55% reduction in carbon emissions by 2030 on 1990 levels. The overarching goal is to make the EU carbon neutral by 2050 as part of the European Green Deal. 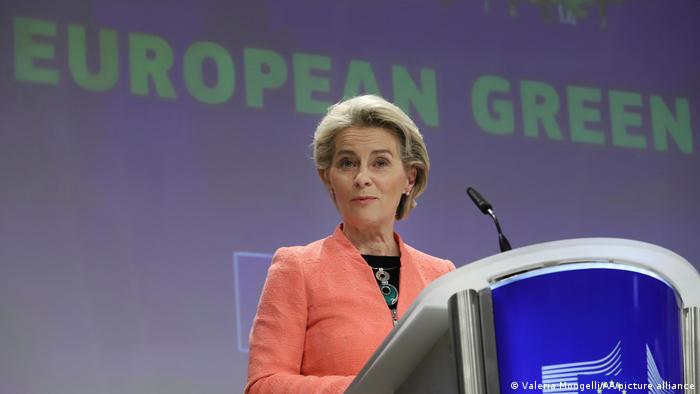 The European Commission has proposed a plan to reduce the EU's carbon emissions by 55% compared with 1990 levels by 2030.

The "Fit for 55" package comprises 12 legislative proposals aimed at hitting the target.

The overarching goal is to make the EU carbon neutral by 2050 as part of the European Green Deal.

"We already have the goals," European Commission President Ursula von der Leyen told reporters in Brussels at a press conference to announce the proposals. "We have a climate law which is underpinned by investment. With this proposal, we have the road map."

The announcement starts what is expected to be a two-year process during which the details and ambitions of the proposals will be fought over by the EU's national governments and the European Parliament.

Governments from outside of the European Union and lobbies for affected industries will also do everything they can to amend the plans to fit their desires.

Von der Leyen: 'We have a goal, but now we're presenting the road map'

According to the proposals, no more combustion engine cars, whether powered by petrol or diesel, would be manufactured in the European Union by 2035 including hybrid vehicles.

From that point, only zero-emission cars such as electric or hydrogen-powered vehicles would be permitted to be manufactured.

At that point, the European Union would also end the financial and incentives given to carmakers to make the transition to electric.

"We're putting a price on carbon and a premium on decarbonizing technologies," said European Commission Executive Vice President Frans Timmermans, who is in charge of the Green Deal.

EU officials acknowledged that — with only 226,000 charging points in the EU,  most of them in the Netherlands, France and Germany — much work remains to establish the infrastructure needs for the transition to electric cars.

With ground transport responsible for about a quarter of the EU's total carbon emissions, the proposals are also targeting the aviation and shipping sectors.

According to the proposal, 80% of flights by 2035 would be carried out by planes running on sustainable aviation fuels, which would emit about 80% less carbon than current fossil fuel options.

Such fuels are sourced from cooking oils and animal and plant fats, but are not yet readily available or used.

Airlines that do not comply would lose their tax exemption and be forced to pay more for emissions.

The increased costs would likely be passed on to airline passengers through increased ticket prices.

"Burning carbon in airplanes is more than three times worse for the environment than burning it at ground level," said Jean-Pascal van Ypersele, a professor of environmental sciences at the UCLouvain in Belgium. "Increasing taxes on kerosene for flying would be a good way to stop people flying when they could take a train."

Under the plan, vessels that arrive in EU ports would need to use at least 80% low-carbon fuels by 2050.

The proposal, intended to force emissions reductions in the global shipping fleet, will face resistance from non-EU countries.

In order to make high-emitting technology uncompetitive, the package also includes an expansion to the current system of bartering emissions .

The EU Emissions Trading Scheme would be updated to include many more sectors, including aviation and shipping.

The system essentially allows EU governments and companies that operate within the bloc to buy and sell the amount of emissions that they are permitted to produce within capped overall limits.

An entity that produces very few emissions can sell its quota to one that emits more.

The proposal also sets out a new and separate system for bartering emissions for the building and transport sectors.

Brussels says the current scheme — which covers areas such as steel, cement and power — is already set to reduce carbon emissions by around 44% in the respective sectors.

The proposal to slap taxes on imports of goods and products that have a large carbon footprint will likely face global resistance. The first sectors to be targeted would be steel, iron, aluminum, cement, fertilizers and electricity.

By making it more expensive to export high-emitting products into the bloc, the EU intends to use internal legislation to force countries around the world to reduce their emissions.

The package also includes plans for new taxes on energy to ensure that the most polluting fuels are the most taxed.

It also outlines national targets for governments to protect and expand their forests, which turn carbon into oxygen.

The whole proposal is covered by a suggested €72.2 billion ($85.4 billion) Social Climate Fund for the period from 2025 through 2032, which, according to the European Commission, would ensure that people who lose their jobs are supported through the transition.

"Celebrating these policies is like a high-jumper claiming a medal for running in under the bar," Greenpeace EU director Jorgo Riss said. He added that policies that won't come into force for a decade will be too late.