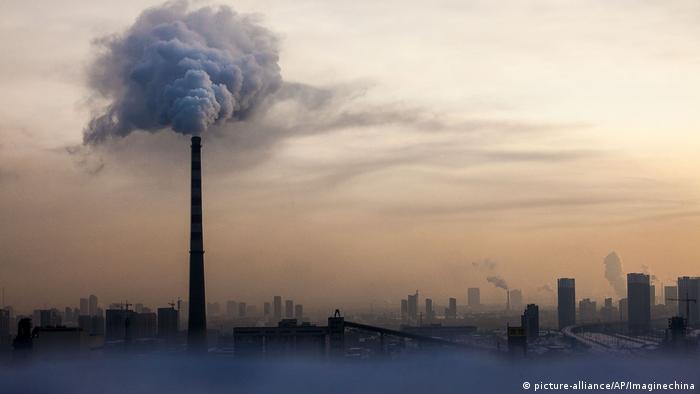 The science is clear: If catastrophic global warming is to be averted, global greenhouse gases have to be reduced — and fast. A 2019 United Nations Environment Program report warned that the world must cut emissions by 7.6% annually until 2030 in order to keep temperature increases below the 1.5 degrees Celsius (2.7 degrees Fahrenheit) ambition outlined in the Paris Agreement.

If the world continues at its current pace, heating is predicted to reach almost double that. And much of the power to make a difference lies with the big emitters. So are they making progress?

Though the COVID-19 pandemic and resulting economic crisis led to a drop in energy use in 2020 compared to the previous year, the United States is still second only to China in terms of global CO2 emissions.

Transportation, electricity and industry are the main drivers behind the country's poor record, according to figures from the US Environmental Protection Agency (EPA). In 2019, fossil fuels accounted for 80% of US energy consumption.

Under US former President Donald Trump, who overtly denied human-caused climate change and pulled out of the Paris Climate Agreement, the country ranked the worst in the world for climate protection efforts for two consecutive years. 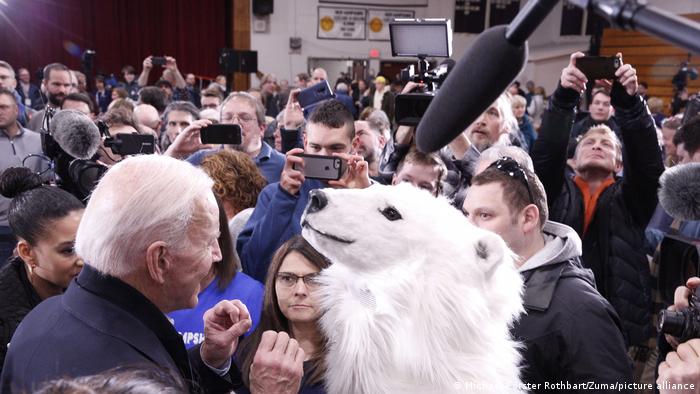 But with President Joe Biden now at the helm, there is a mood change on environmental matters. He formally rejoined the Paris agreement as soon as he took office, compiled an environmental team and has pledged to make the US a cleaner, greener country. This includes reversing many of the Trump-era initiatives that systematically rolled back ecological protection regulations and served to prop up the oil and gas industries.

At a climate summit on Thursday, Biden is expected to commit the US to 50% emissions cuts by 2030, compared to 2005 levels, according to multiple US media reports.

China is the largest carbon emitter globally. But it also has the world's largest population. China's annual per capita emissions are growing, and at 7 tons they are already higher than the roughly 5-ton global average.

As the world's top manufacturing nation and the largest exporter of goods, embedded emissions — CO2 embedded in exported goods — are a big issue for China. Because CO2 emissions are generally measured by the amount a country directly emits, nations can reduce their emissions by outsourcing carbon-emitting production abroad to places like China. 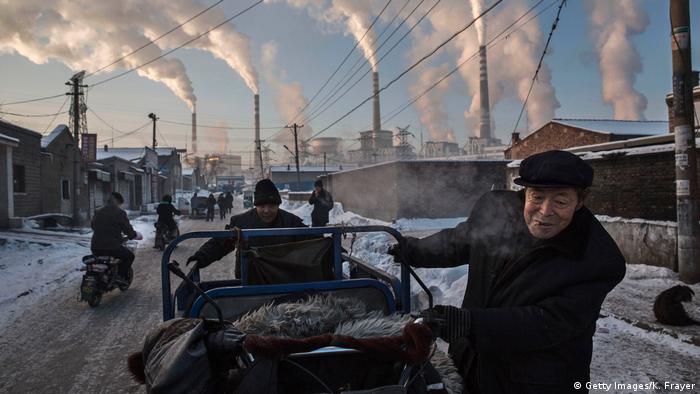 However, China also benefits from this means of emissions measuring. While it has cut the share of coal in its own energy mix, it invests heavily in coal-fired power projects around the world.

But China has made climate promises, aiming to bring emissions to a peak by "around 2030" and further reduce its use of fossil fuels in the next decade. Progress in reducing air pollution also offers hope that the leading CO2 contributor could achieve a shift towards climate protection in the future.

Chinese leader Xi Jinping shocked the international community in September by announcing his aim to have "CO2 emissions peak before 2030 and achieve carbon neutrality before 2060."

But it has since continued actions that push it away from that goal like opening new coal mines. According to Climate Action Tracker, an independent analysis by two German research organizations, China would need to phase out coal before 2040 to be on track to a 1.5 degree Celsius scenario.

Germany: For the love of cars and coal

A decade ago, Germany's plan to move to renewable energy positioned the country as a pioneer in the fight against climate change. But its climate protection efforts have stalled, and with Germany responsible for 2% of global emissions, it still has a big carbon footprint.

Last year, fossil fuels made up 55% of Germany's primary energy consumption, according to government data. More than one-third of that was generated using highly polluting lignite and hard coal, which the country still relies on to maintain a steady energy supply alongside fluctuating renewables.

Currently, 45% of Germany's power mix comes from renewables, but the country wants to raise the share to 65% by the end of the decade.

The COVID-19 pandemic and resulting declines in energy consumption, industrial production and transport saw Germany's 2020 emissions fall to 42.3% over 1990 levels, helping the country exceed its 2020 climate protection target of a 40% reduction. 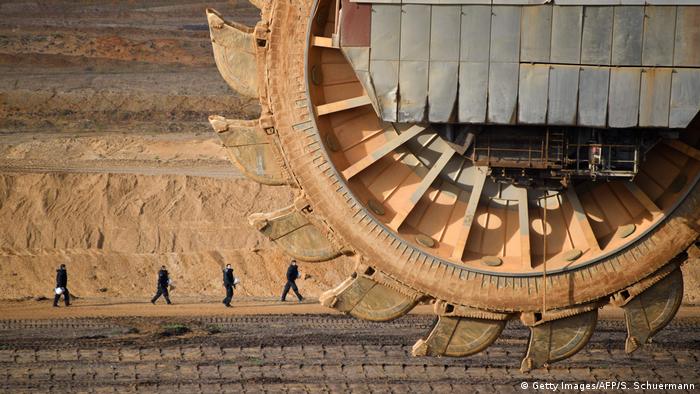 By 2038, Germany wants to close all coal power plants

But the country still has a long way to go to reach carbon neutrality. And that has much to do with both coal and cars. One of the world's largest car exporters, Germany has a strong car lobby and unlike other European countries has not set out a date for phasing out internal combustion engines.

The German government has also promised to close all coal-powered plants by 2038, but with other countries vowing to abandon coal much sooner, that pledge is widely regarded as weak.

Under pressure from an increasingly climate-conscious electorate, the German government, like the European Union, has pledged to become climate neutral by 2050. As a preliminary target, Germany wants to cut its emissions by at least 55% by 2030 compared to 1990 levels.

The Gulf state is the world's largest oil exporter and its economy relies heavily on the oil industry. Ambitious pledges to diversify by investing in renewables have resulted in little progress.

The country also has high per capita emissions at more than 19 tons annually compared to the global average of around 4.8 tons per person per year. This is partly due to people needing to cool their homes. The desert country faces extreme temperatures, water shortages and increasing desertification. A 2019 YouGov poll found the majority of Saudis believe climate change would affect their lives. Of those surveyed, 41% believed the issue would have "a great deal of impact." 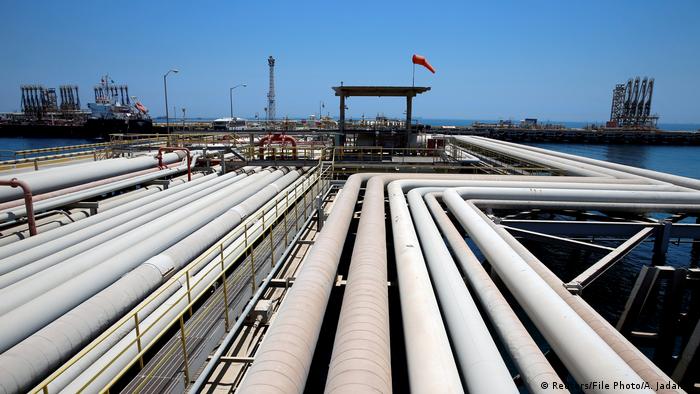 Due to its large oil industry, Saudi Arabia is among the biggest emitters

In 2019, the government announced a new renewable energy target, which aimed to achieve 27.3 GW of green power by 2023 and 57.8 GW by 2030. According to Climate Action Tracker, progress has been slow with just 0.4 GW of renewables capacity installed by 2019.

For years, critics have blamed Saudi Arabia not only for its high contributions to climate change but for blocking attempts to tackle it.

India is the world's third-largest carbon emitter. But its CO2 output is far lower than both China and the US. And when India's huge population is taken into account, the picture looks different again. Its emissions per capita are actually less than half the global average. That's partly because a large proportion of the population lives below the poverty line — more than a quarter, according to the UN's latest human development report. 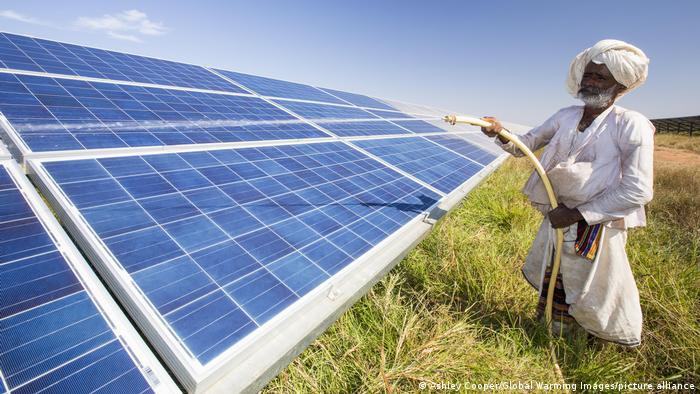 India has pledged to expand its renewables, but is also heavily reliant on coal

However, India is developing fast. Its energy demands are rising, as are its emissions. The country meets its energy needs mainly through coal. Fossil fuels account for almost three-quarters of India's total energy consumption, UN figures show. The government has promised to change that, saying India aims to generate 40% of its energy from non-fossil fuel sources by 2030.

But investors are put off by the initial high financial outlay required for renewable energy infrastructure, despite the long-term savings. Until energy produced by renewable sources like wind and solar can be stored cheaply and efficiently, the country will still need to rely on coal power.

Unlike other big emitters — China, the US and the EU — India has not set a net-zero emissions goal for the middle of the century. Under its Paris Agreement pledge, it said it would reduce the carbon intensity of its economy by 33% to 35% from 2005 levels by the end of the decade.