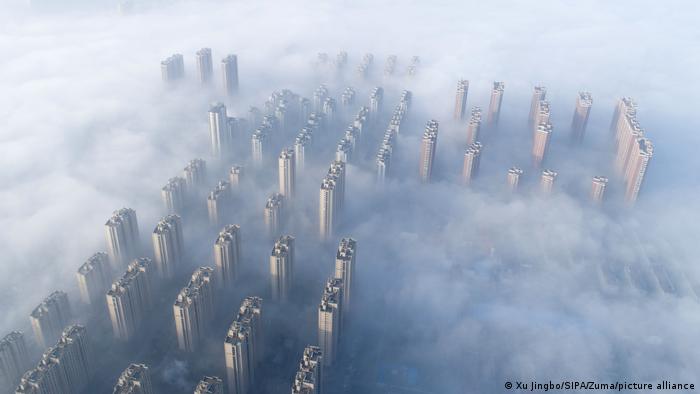 Smog in the Chinese city of Nanton

United States climate envoy John Kerry is in China for talks on Thursday, ahead of President Joe Biden's climate summit of world leaders.

The US and China are the world's biggest carbon emitters and have both set targets to become carbon neutral in coming decades.

China plans to achieve that goal by 2060, but analysts have warned that heavy reliance on coal and modest short-term targets could make that difficult.

Why is Kerry's trip important?

The trip marks the highest-level trip to China so far for officials of the Biden administration. Kerry's visit is seen as a chance to put aside existing political tensions and focus on areas of potential climate collaboration. His visit comes amid heightened agitation over human rights, trade and China's territorial claims to Taiwan and the South China Sea.

China's Ministry of Ecology and Environment said the discussions, which will run through Saturday in Shanghai, aim to boost cooperation on climate change, and exchange views on thie United Nations climate change conference for this year, known as COP26.

Officials are also expected to discuss the UN-led climate talks to be held in Glasgow at the end of the year.

After talks in China, Kerry will travel on to Seoul, South Korea. The US Embassy in Beijing said no media events are planned before Kerry heads to Seoul.

What is on the summit agenda?

Biden has invited 40 world leaders, including Chinese head of state Xi Jinping, to participate in a virtual climate summit April 22-23. Kerry has been pushing global leaders in person and over the internet ahead of the summit for commitments and alliances on climate efforts.

So far, international pledges to decarbonize would only reduce global emissions 1% by 2030 compared with 2010 levels — which is just a fraction of what scientists say is needed to avert the most severe impacts of climate change.

The virtual summit, which begins on Earth Day, will also pave the way for Biden to reclaim US leadership in global climate efforts, following four years in which former president Donald Trump downplayed the issue in favor of supporting the oil and coal industries.

The US and other countries are expected to announce more national targets for cutting carbon emissions, and to pledge financial help for climate efforts made by less wealthy nations.