The former secretary of state will travel to China for climate talks as world powers look for ways to follow their pledges under the 2015 Paris accord. A UN summit takes place in Glasgow, Scotland, later this year. 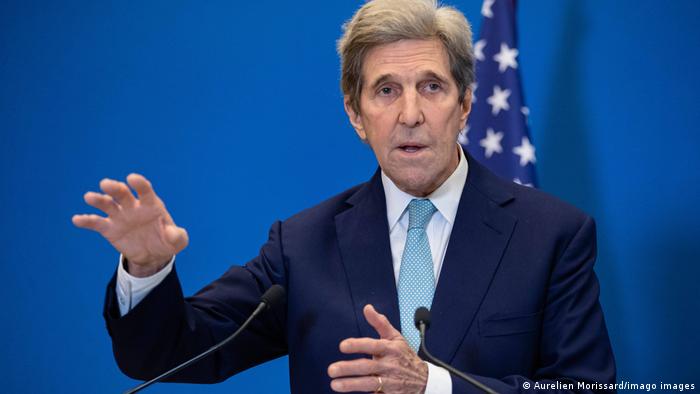 China is the latest stop in Kerry's climate diplomacy tour

US climate envoy John Kerry is traveling to China on Wednesday for talks on how to limit global warming. His trip is the first official Chinese visit from the new Biden administration.

The former secretary of state will visit Shanghai as well as the South Korean capital Seoul, the US Department of State confirmed.

Kerry's visit comes at a time of heightened tensions between Washington and Beijing on several other issues, such as China's treatment of its Uyghur Muslim minority and its crackdown on human rights in Hong Kong.

US President Joe Biden has invited more than 40 world leaders to a video summit on climate change next week, including Chinese President Xi Jinping and Russian President Vladimir Putin.

"We have big disagreements with China on some key issues, absolutely. But climate has to stand alone," Kerry told CNN in an interview.

The ex-US senator said that global powers must work together to tackle the issue: otherwise "you’re just killing yourself, you're going be hurting your own people."

But will China take part?

With global temperatures and natural disasters on the rise, Biden has made climate a top priority by bringing the US back into the 2015 Paris accord.

His predecessor, Donald Trump, pulled of the UN deal that pledged to keep temperature rises at no more than 2 degrees Celsius (3.6 degrees Fahrenheit).

Kerry said that Xi had not yet confirmed whether he would take part in the summit.

Getting ready for Glasgow

Fresh talks between world powers are set to take place in the Scottish city of Glasgow at the end of this year.

Kerry has already been traveling around the world making the case for a renewed push to keep to what was agreed in Paris six years ago.

The United States and China, the world's top two economies, account for nearly half of the greenhouse gas emissions responsible for climate change.

Biden wants to use the online meeting in April to urge other leaders to expand their climate targets.