Is Saudi Aramco eyeing a step into Russia′s backyard? | Business| Economy and finance news from a German perspective | DW | 23.12.2020

Is Saudi Aramco eyeing a step into Russia's backyard? 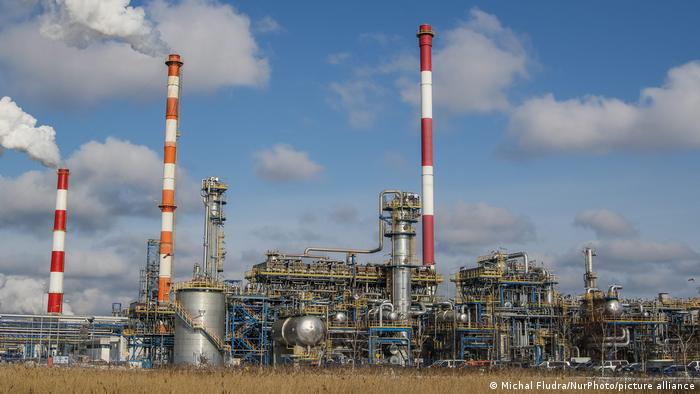 The Saudi firm Aramco is reportedly interested in buying a 30% stake in Polish firm Lotos's refinery in Gdansk, on the Baltic Sea. For Aramco, a position in northern Poland would open up the possibility of expansion into the Baltic Sea region and Central Europe. Lotos has been told by the European Commission to dispose of the assets in order for its takeover by Poland's largest oil firm PKN Orlen to go ahead.

Orlen would also benefit from an increase in cheaper oil purchases from Aramco, further underpinning its strategy of diversifying its fuel supplies. Orlen's main goal is to divert away from Russian dependence. About 30% of all crude oil processed at the Orlen Group is now sourced elsewhere.

The shortlist of potential buyers of Lotos's assets is expected by the end of the first quarter of 2021. Lotos has until November 2021 to complete the transaction. Until now, Hungarian firm MOL has been favored to buy Lotos's assets.

"This is not a great investment for Aramco in a purely business sense, with downstream profits falling and Asian rivals growing," Robert Tomaszewski at Polityka Insight, a Warsaw-based think tank, told DW. "But it would give the company a new refining installation, and is open to the sea, opening up the Baltic and close to Germany's terminals at Schwedt and Iuna. The key, however, is that this is in Rosneft's backyard and that would be a game changer."

Saudi Aramco owns the second-largest oil field in the world and is the largest producer globally. Some 98% of its shares are held by the government of Saudi Arabia.

Can carbon dioxide be a valuable untapped resource?

Can carbon dioxide be a valuable untapped resource?

Aramco looks to the Baltic

Europe hasn't been high on the list of Aramco's priority markets; the company has no refineries or oil stations on the continent. Its strategy is to expand in markets with the greatest growth potential, mainly China, India and South-East Asia. Saudi Arabia's official selling prices (OSPs) has signaled that the kingdom is targeting the Asian market, where demand remains strong during the global slowdown. Russia has also relied on Asian markets as a destination for its oil output since launching the 1.6 million barrel per day ESPO pipeline, connecting Russian fields to Asian markets through the port of Kozmino.

Saudi-Russia relations have been tense for some time over oil production quotas set by OPEC, with the two countries playing a game of cat and mouse on spot markets. After the outbreak of the COVID-19 pandemic, for example, Aramco slashed its oil prices for European customers. When the political crisis between Belarus and Russia started this summer, Aramco sold Minsk its first oil supply to Belarusian refineries.

"As demand is falling the competition gets even tougher. [The] Saudis don't mind going the extra mile for the buyer," a source at a European refiner told Reuters news agency.

Russia's main advantage in the market fight with Saudi Arabia is its pipeline network. It is cheaper than its rival, which has to find tankers and pay for transportation, traders told Reuters. Unlike Saudi Arabia, it is not subject to freight rates and vessel availability.

Orlen established relations with Saudi Aramco in April 2016, when then CEO Wojciech Jasinski concluded a long-term contract with Aramco for the supply of 200,000 tons of oil per month. In April 2018, the two companies signed an annex to increase the volume to 300,000 tons. Earlier this year, Orlen agreed to import up to 800,000 tons of Saudi crude oil over six months under a contract signed with Saudi Aramco Products Trading Company, a subsidiary of the Saudi oil producer. Under a separate commercial contract, the supplier committed to purchase heavy fuel oil from Orlen Lietuva.

"Our strengthening of relations with partners in the Persian Gulf region is a real contribution to enhancing Poland's energy security," Daniel Obajtek, current CEO of Orlen, said.

By 2030, Orlen intends to spend 140 billion zlotys ($38 billion, €33 billion) on investments. The goal is to transform the company into a multi-energy concern. Some 50% of this sum is to go to new business branches, including renewable energy and low-emission petrochemistry. Some 40% will go to refining, petrochemical, mining, fuel retail, energy and gas distribution segments, and 10% to "investments in the future," with includes hydrogen, recycling, R&D and digitization.

The strategy does not take into account the planned acquisition of Poland's main gas company PGNiG. Orlen is to submit a preliminary application to the European Commission regarding its acquisition in the first quarter of 2021.

EU-China trade deal must be done 'sooner rather than later'

EU-China trade deal must be done 'sooner rather than later'

A possible Polish-Saudi deal would be of geopolitical significance. The US, which wants to push Russian oil and gas out of Europe, is Riyadh's close ally.

"This year has seen a war price with Rosneft, but the key now is Iran. What Biden does is crucial. Orlen wanted to sign deals with Iran and if the wind changes again it could again," Tomaszewski says.

In March, it was reported that the Trump administration was considering intervening in the Saudi-Russian oil-price war.

Administration officials were reportedly looking at how to push the Saudis to cut production and sanctions on Russia aimed at stabilizing prices. The two countries this month ended a three-year pact to limit production and stabilize prices, leading Saudi Arabia to raise output to record highs and slash its prices to compete for falling global demand.