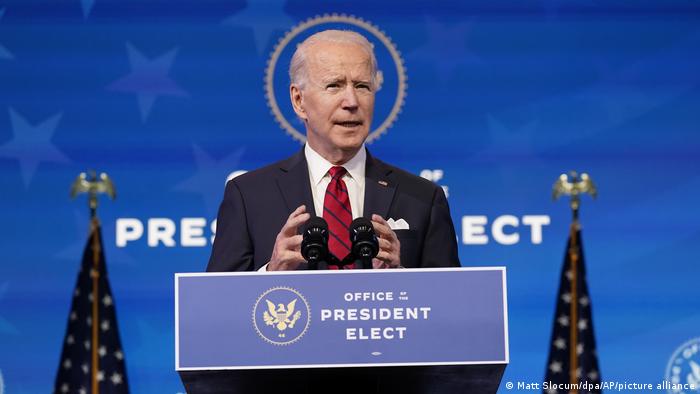 Joe Biden's top aide announced on Saturday the incoming US president would sign "roughly a dozen" executive orders on his first day in office.

This was announced as the country anticipates violence by Trump supporters ahead of the Inauguration Day on Wednesday.

Biden's executive orders would be related to the coronavirus pandemic, the ailing US economy, climate change and racial injustice in America.

"In his first ten days in office, President-elect Biden will take decisive action to address these four crises, prevent other urgent and irreversible harms, and restore America's place in the world," said incoming chief of staff Ron Klain, in a memo to senior staff.

What are Biden's executive order plans?

Within hours of being sworn in, Biden is expected to use executive orders to fulfill many of his previous campaign promises — including: rejoining the Paris climate accord, and reversing Trump's ban on the entry of people from certain Muslim majority nations.

Other plans include extending a pause on federal student loan payments, halting evictions and foreclosures, as well as mandating masks in inter-state travel and on federal property.

Biden will seek funds of $1.9 trillion (€1.57 trillion) to revive the economy, which includes stimulus checks and other aid, as well as speeding up the vaccine rollout.

Other executive actions include extending a pause on federal student loan payments as well as halting evictions and foreclosures.

The US is facing multiple challenges as Biden inherits the nation from Trump. The country's COVID-19 death toll is soon expected to reach 400,000 while the economy has been facing a downturn.

"President-elect Biden will take action — not just to reverse the gravest damages of the Trump administration — but also to start moving our country forward," Klain said in the memo.

More executive orders relating to Biden's priority areas would be signed over a period of nine days following Inauguration Day, he added.

Some of these measures include increasing coronavirus testing and favoring American-made goods for government purchases.

How Trump's policies will mark a generation

Donald Trump's presidency may be coming to an end, but he has changed the course of US politics — and his impact will be felt for generations.