The US has formally left the 2015 Paris climate agreement. Future US participation in the international pact will depend on the outcome of the presidential election. 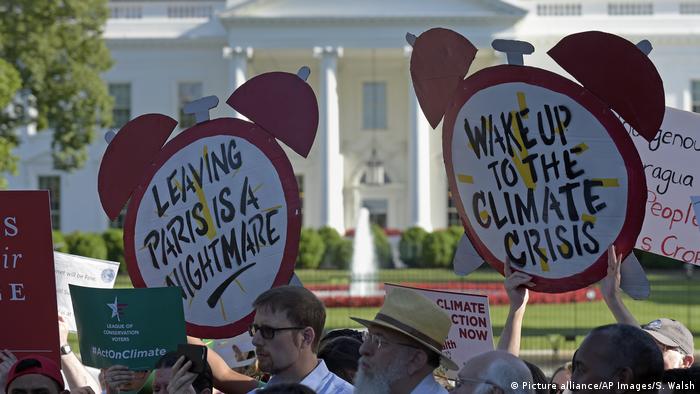 The United States formally left the Paris climate accord on Wednesday, becoming the first country in the world to withdraw from the international climate pact aimed at reigning in greenhouse emissions.

President Donald Trump's administration had notified the United Nations last year of the US withdrawal from the accord. The mandatory one-year waiting period required for it to exit ended on Wednesday.

The fate of the US participation in the Paris agreement now rests on the outcome of the presidential election.

Trump to keep US out, Biden wants back in

Trump, a staunch opponent of the international accord, had first announced his intention to withdraw the US from the landmark agreement in 2017, but the UN rules prevented countries from leaving in the first three years.

If Trump were to be reelected, the US — the world's largest economy and the second-biggest polluter after China — would stay out of the accord.

During his presidency, Trump has questioned climate science on multiple occasions, championed the fossil fuel industry, and weakened environmental protections.

His Democratic rival Joe Biden, in contrast, has vowed to immediately rejoin the Paris agreement if he wins the presidential election.

Biden has called climate change and global warming "an existential threat to humanity" and that the US has a "moral obligation to deal with it."

Biden has also proposed a $1.7 trillion plan to bring US carbon emission to net-zero by 2050.

Regardless of how the election turns out, the United States will still be "outside the conversation" when the UK and the UN host a climate summit on December 12, on the fifth anniversary of the Paris accord.

Climate scientists have warned the unless drastic action is taken, global temperatures may rise more than 2 degrees Celsius above pre-industrial levels, triggering a series of catastrophic climate tipping points by the end of the century.

Read more: Carbon capture: How can we remove CO2 from the atmosphere?

This could be averted if global emissions reached net-zero by mid-century, according to the UN's Intergovernmental Panel on Climate Change.

"This election could be a make or break point for international climate policy," he said. "Biden's climate plan alone could reduce temperature increase in the order of 0.1°C. Every tenth of a degree counts."