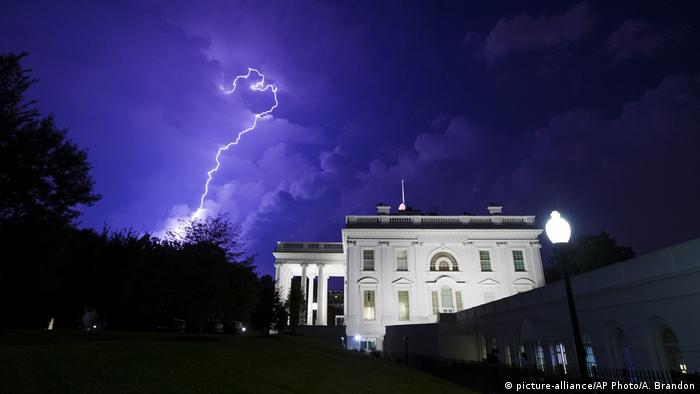 US President Donald Trump has undone many major pieces of climate policy during his term, walking out on the 2015 Paris Agreement to limit global warming and eliminating numerous Obama-era environmental regulations.

Trump's Democratic opponent, Joe Biden, has promised as part of his presidential campaign to invest $1.7 trillion (€1.4 trillion) in a "clean energy revolution and environmental justice" over the next decade. It falls some $14 trillion short of what the progressive US senator from Vermont, Bernie Sanders, pledged on climate action during the Democratic primaries.

However, climate change doesn't even make the top 10 concerns among registered voters, even as the US faces extreme weather from wildfires to storms, which scientists say are becoming more prevalent thanks to global warming. The issue ranks 11th behind the economy, health care, Supreme Court appointments and the pandemic, according to a survey conducted by the Pew Research Center published in August.

While climate change doesn't top the voters' agenda, it's still one of the most divisive issues among Trump and Biden supporters. Some 68% of Democratic voters see climate change as high priority compared to 11% or Republicans, found the Pew survey. 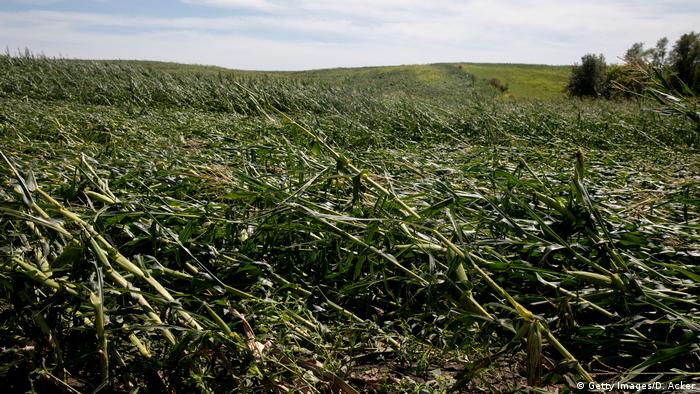 Following a storm in Iowa last month, estimates suggested that almost a third of the state's crop-growing land was affected 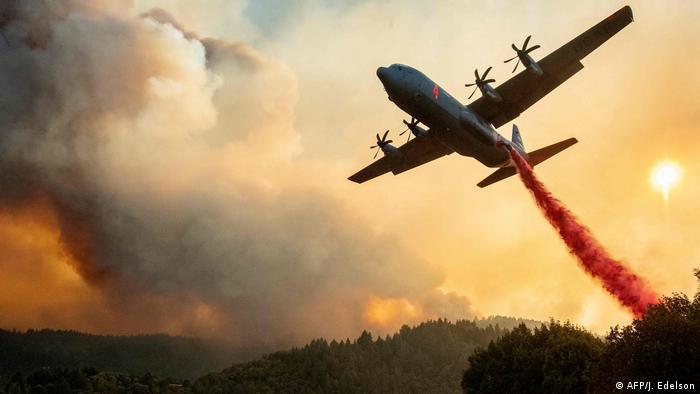 Wildfires are becoming more frequent in California, where the ground and vegetation has suffered from long, dry summers

But what are the Biden and Trump campaigns promising to do on climate change and the environment — and how does it tally with what voters want?

Biden, Barack Obama's former vice president, plans to recommit to the Paris Accord and ensure that the US achieves a 100% clean energy economy and reaches net-zero emissions by 2050. Biden has also promised a halt to fossil fuel subsidies, going further than the Democratic National Committee, the governing body of the Democrats, which dropped that demand from its platform earlier this month.

Prior to Kamala Harris' announcement as Biden's running mate, the California senator had been vocal in her support for bold climate action. Harris co-sponsored the New Green Deal, calling on Congress to implement a 10-year government-driven mobilization to decarbonize the economy, while also backing job retraining and social and environmental justice.

But some Democratic voters are disappointed with the Biden/Harris ticket, believing Sanders, who dropped out of the Democratic race for president in April, would have been the better candidate.

"I have two kids, so I have to be mindful and hopeful, but I lost a lot of hope since Bernie Sanders didn't get the bid," said Karen Antunes, as she wrapped up a picnic with her kids and little dog in Peninsula Park in Portland Oregon.

That won't stop her voting Democrat though.

"We have to. The Trump thing has got to end," added Antunes. "But I'm not excited."

Can Kamala Harris tip the balance in Pennsylvania?

Most progressive voters like Antunes might prefer to unite behind Biden against Trump's reelection even if they don't feel his commitment to climate change action goes far enough.

Over the last few years, Trump has dismissed climate change as a "hoax," not human-caused, and called environmental activists "perennial prophets of doom."

The US president's 63 bullet-point election agenda, which is divided into categories like "Jobs," "Eradicate COVID-19" and "End our reliance on China," makes no direct mention of climate change or the environment.

Instead, tucked away under the heading "Innovate for the future" toward the bottom of the list, there are two promises: "Continue to Lead the World in Access to the Cleanest Drinking Water and Cleanest Air" and "Partner with Other Nations to Clean Up our Planet's Oceans."

The plan outlines no path to clean water or air. 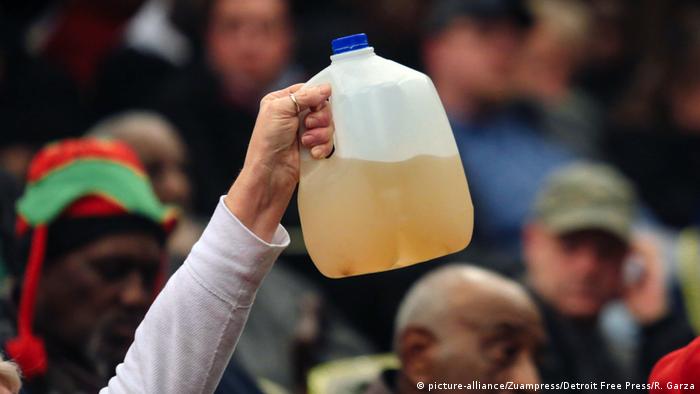 In this image from 2015, a resident of Flint holds up a sample of dirty water 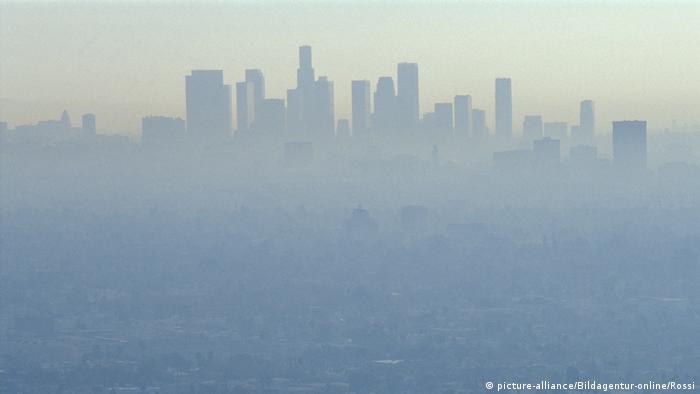 Los Angeles has a history of bad smog

The lack of climate change mentions in Trump's agenda might please many Republican voters since they are "obviously less supportive of regulations," said Daron Shaw, a professor specializing in voting behavior at the University of Texas at Austin and co-director of the Fox News Poll.

"Democrats are much more willing to take stronger measures," said Shaw, adding that few Republicans support policies such as a significant carbon or fossil fuel tax. "But if you ask Republicans about recycling, if you ask about fuel efficiency standards, they're very supportive of those sorts of smallish behaviors."

Some younger Republicans are starting to become critical of their party's inattention to climate change. During the recent Republican National Convention, a small group turned to Twitter during the online event, to ask "#WhatAboutClimate"?

Another Pew study from June 2020 found that millennial and Gen Z Republicans, currently aged 18 to 39, are more likely than older GOP voters to think humans have a significant impact on the climate and that the federal government is doing too little to tackle the problem.

That doesn't mean they're ready to switch allegiance to the Democrats, though.

"Being a Republican is very much rooted in my upbringing," said Kiera O'Brien, who founded the group Young Conservatives for Carbon Dividends (YCCD). "Conservatism at home in Ketchikan, Alaska, has a focus on community and nature."

O'Brien dislikes the Democrat's "regulatory approach to climate" and is instead lobbying for free market solutions to climate change through YCCD.

Environmental policies can be a complicated issue when it comes to federal elections and hard to address for presidential candidates. Many regions in the US have unique challenges: from wildfires in California and storms wiping out harvests in Iowa to water pollution in Flint, Michigan.

Harvard's Ansolabehere also pointed out that opposition to climate policies in the past were typically connected to the fear of losing jobs and that prohibiting coal or retooling the auto industry will "adversely affect employment" in places like Kentucky and Michigan.

Daron Shaw added that Republicans typically "try to frame environmental issues as a matter of high taxation and job killing proposals with the hope that they can peel off Democrats."

Biden might be trying to assuage fears that tackling climate change means job losses by framing his plan as an opportunity for employment in new industries and a reinvigorated green manufacturing sector.

But when it comes to the swing states of Pennsylvania, Virginia and Ohio, Trump's climate record and support for jobs in the fossil fuel sector might give him the upper hand. His backing for ethane cracker plants, which take natural gas and converts it into the basis for making plastics, has received a lot of support, said Ansolabehere, especially from local unions.

A small island in Chesapeake Bay is drowning due to erosion and rising sea levels, but most of its residents don't believe in climate change. Instead, they hope US President Donald Trump will build a wall to save them.

Can the US escape climate finance obligations?

The US decision to pull out of the Paris Agreement is bad for climate action, but what are the implications for international funding? DW spoke to Joe Thwaites, climate finance expert with the World Resources Institute.