Joe Biden vows to end 'this season of darkness for America'

Former US Vice President Joe Biden has formally accepted the Democratic Party's nomination to be their candidate for president. He described the upcoming election as a "battle for America's souls." 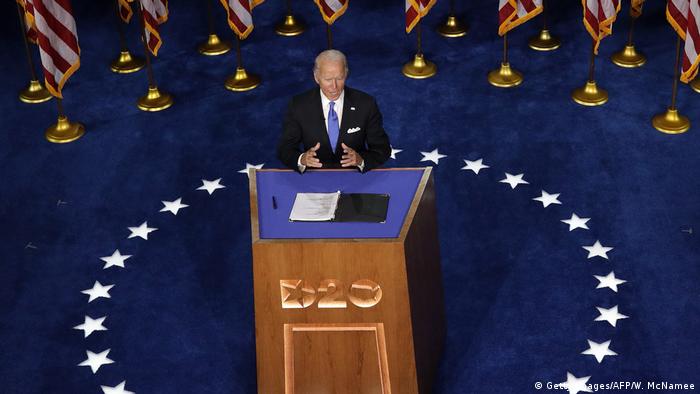 Joe Biden formally accepted the US Democratic presidential nomination on Thursday on the final day of the party's convention.

The 77-year-old former vice president called for unity in his speech, which closed the four-day convention.

"I want to be America's president," he stated in an impassioned speech, saying he would represent all people, not just those who voted for him. He described the election as a "battle for America's souls" and vowed to end "this season of darkness for America."

"The days of the US cozying up to dictators are over," he added.

He also vowed that his first priority as president would be "dealing with this coronavirus."

"The tragedy of this virus is that it could have been avoided," Biden said.

He implied mandatory mask-wearing would be brought in at a federal level under his presidency.

The convention was held online owing to the pandemic which has claimed over 170,000 lives in the US.

Former presidential nominee hopeful Kamala Harris made history on Wednesday when she accepted the nomination to be vice president.

Read more: Opinion: US Democratic convention kicks off without a bang

Comedian Julia Louis-Dreyfus hosted the fourth and final evening of coverage of the convention, which included a tribute to the late civil rights activist and Congressman John Lewis.

Key among the themes of the convention was a focus on the use of mail-in ballots, which President Donald Trump has criticized.

Trump took to Twitter to express his disapproval of Joe Biden's speech, writing "he will never change, just words!"

Biden will now face Trump in the presidential election in November.

Joe Biden nominated as Democratic candidate for US president

At their all-virtual national convention, Democrats have formally nominated Joe Biden as their 2020 presidential candidate. The former vice president will square off with Donald Trump in November's presidential election.