The former US president claimed his successor had no interest in "taking the job seriously." In a scathing attack, Obama warned that American democracy might not survive another four years of Donald Trump. 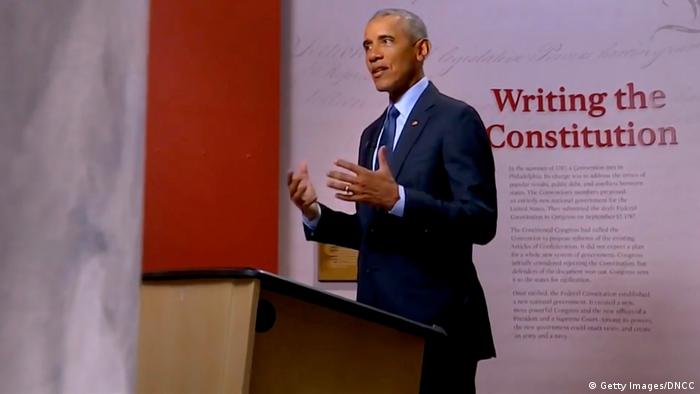 Former US President Barack Obama did not hold back in criticizing his successor Donald Trump during a speech at the Democratic National Convention on Wednesday.

The former president called on American voters to "embrace your own responsibility as citizens, to make sure that the basic tenets of our democracy endure."

"Because that's what is at stake right now. Our democracy," Obama said.

Even in the heat of past campaigns, former presidents are rarely so vocal and direct in their criticisms of a sitting president. Obama said he had hoped Trump would "show some interest in taking the job seriously."

"But he never did. He’s shown no interest in putting in the work, no interest in finding common ground, no interest in using the awesome power of his office to help anyone but himself and his friends, no interest in treating the presidency as anything but one more reality show that he can use to get the attention he craves," Obama said.

"Donald Trump hasn’t grown into the job because he can’t."

Obama's speech comes a day after his former vice president, Joe Biden, officially became the Democratic nominee for president. Obama said he ended up "finding a brother" when he chose Biden to be his running mate in the 2008 presidential election.

Trump: Obama the reason I was elected

In anticipation of Obama's speech, Trump maintained that the reason why he was elected was because his predecessor and Biden did not do a good job.

"They did such a bad job that I stand before you as president," Trump said at a press conference earlier Wednesday.

"I would have been very happy. I enjoyed my previous life very much."

Not a 'woulda shoulda coulda' election

Hillary Clinton, who the US presidential election in 2016 to Trump, said voters should take nothing for granted if they want to vote the Republican president out of office.

"For four years, people have said to me, 'I didn’t realize how dangerous he was,' 'I wish I could go back and do it over,' or worst, 'I should have voted,'" Clinton said. "Well, this can’t be another woulda coulda shoulda election."

Clinton hailed Biden as someone who "knows how to heal, unify and lead," adding the US "needs a president who shows the same compassion, determination, and leadership in the White House that we see in our communities."

California Senator Kamala Harris was confirmed as former Vice President Joe Biden's running mate for the 2020 US presidential election. She is the first woman of color to be part of a major White House ticket.

The governor of Florida also sent a group of 50 Latin American migrants to the wealthy island of Martha's Vineyard in Massachusetts. Some of the migrants said they had been tricked.

The US president announced a slew of new programs to support cancer research, and compared his goal of halving cancer deaths to putting a man on the moon.