The lightning has sparked around 367 fires, with California's wine country particularly hard hit. Governor Gavin Newsom has declared a state of emergency. 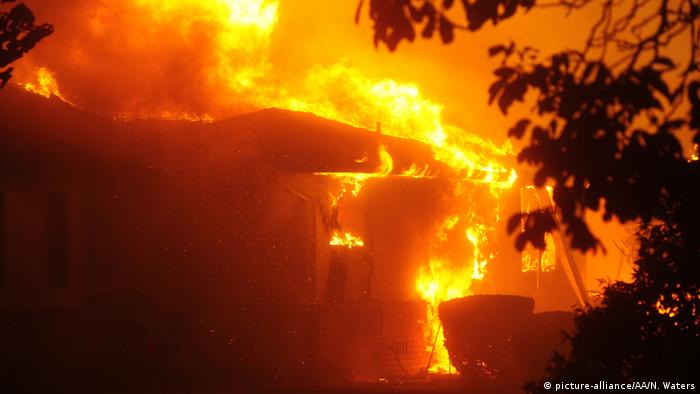 Hundreds of wildfires blazed across northern California on Wednesday, burning down buildings and structures, and forcing thousands to flee their homes. The state is in the middle of a heat wave that started two weeks ago.

California Governor Gavin Newsom declared a state of emergency due to what he said was "this extraordinary weather we're experiencing and all of these lightning strikes, " as the effects of the fire were worsened by the heat wave and strong winds.

The city of Vacaville, with a population of 100,000 saw a group of fires destroy 46,000 acres (18,615 hectares) of land, and brought down at least 50 structures. San Francisco was surrounded by multiple fires, with ash and smoke filling the air.

Five to seven people were injured in a fire southeast of San Francisco, one with major burns.

The group of fires, collectively known as the LNU Lightning Complex, have destroyed structures in several counties of the state, including the wine counties of Napa and Sonoma. In the past few days, California's Death Valley has been experiencing historic temperatures, as high as 54.4 degrees Celsius.

High winds have been fanning the fires, coupled with heat and low humidity conditions.

Crews have been battling the wildfires in several parts of the San Francisco Bay Area, and thousands have been forced to evacuate. Police and firefighters in Vacaville went door to door on Wednesday, in an effort to warn residents as the fires spread. Fire departments from nearby states such as Nevada, Arizona and Texas were sending reinforcements.

"Grateful for our firefighters, first responders, and everyone on the frontlines protecting Californians during this time," said Governor Newsom.

A heat advisory said that nearly 45 million people across the western United States were under an excessive heat warning. The rising temperatures have put a strain on the power network. Blackouts have affected nearly 30,000 Californians.

Wildfires have become more frequent in the state in recent times. Climate change is one of the factors affecting this. Camp Fire, the deadliest fire in California, happened in November 2018, claiming almost 86 lives.