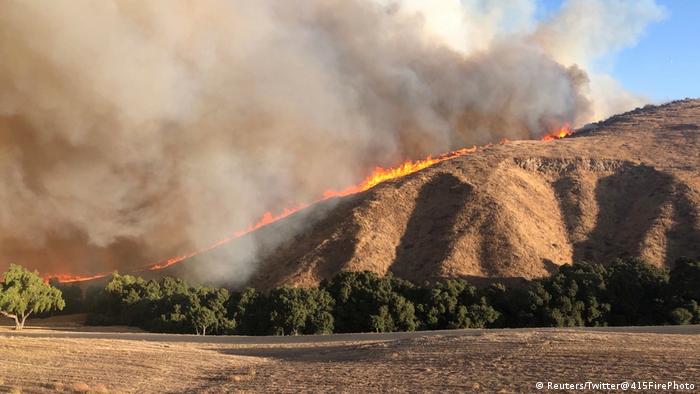 Nearly 1 million people remain without electricity in California as a precaution by Pacific Gas and Electric, state Office of Emergency Services Director Mark Ghilarducci told reporters on Wednesday. According to PG&E, that works out to approximately 900,000 people without lights, refrigerators or climate control as nighttime temperatures dip to near freezing. The utility is slowly beginning to restore power across the north of the western US state.

The latest outage started Tuesday in an effort to prevent damage to equipment that could topple and spark wildfires. According to PG&E, the outage had cut power to a total of 516,000 customers, or 1.2 million people, in parts of 22 counties. An earlier blackout that started Saturday left about 973,000 customers, or about 2.5 million people in 38 counties, without power. It remains unclear for how many people the outages overlapped.

Last week, PG&E acknowledged that the Kincade Fire sparked near a transmission tower around the time when a high-voltage line malfunctioned. PG&E filed for bankruptcy in January, facing up to $30 billion (€27 billion) in liabilities from deadly fires sparked by its equipment in 2017-18.

Southern California Edison announced that the Easy Fire, which has forced thousands to evacuate, broke out near its equipment northwest of Los Angeles. A spokeswoman cautioned that officials haven't determined the cause of the fire in Simi Valley. The utility has filed the required report with state regulators acknowledging that the flames sparked within Edison's service territory near an energized subtransmission line, she said.

Read more: Biodiversity and 'living carbon' are critical for our future

Incident Commander Chad Cook said firefighters made a successful stand protecting the Ronald Reagan Presidential Library, which houses the late actor's archives and memorabilia, including the Air Force One jet on which he flew.

Ventura County Fire Chief Mark Lorenzen said the blaze broke out "about the worst time it could happen" because of winds and "fuels that were ripe and ready to carry fire." Schools and college campuses canceled classes, and county authorities handed out filter masks at five sites.

Firefighters extinguished blazes across California as gusts roared. In Northern California, officials in Sonoma County lifted nearly all of the outstanding evacuations in place for the Kincade Fire there, leaving fewer than 6,000 people out of their homes. At the height of the fire, they had ordered more than 180,000 to leave.

The US National Weather Service issued an "extreme red flag" warning around Los Angeles ahead of two days of dry near-hurricane gusts. The service issued alerts for "critical" or "extreme" fire hazards covering more than 34,000 square miles and encompassing about 21 million people.

From destruction to rejuvenation: When forest fires are a good thing

Fires can be catastrophic in rainforests such as the Amazon, but they don't necessarily spell disaster everywhere — sometimes they help replenish ecosystems. There is even life that needs heat and fire to survive. (27.08.2019)