Thousands of hectares of precious wetland have burned as the world marks Earth Day in honor of protecting the environment. Experts have blamed climate change and the Polish government's water polices. 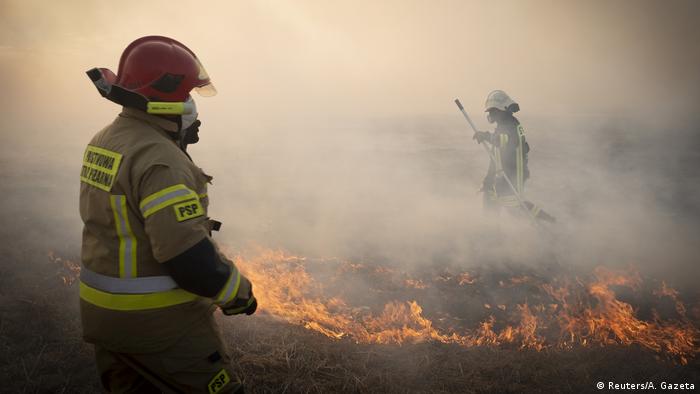 Some 6,000 hectares of Biebrza National Park in northeastern Poland were ablaze on Wednesday, as more than 120 firefighters rushed to extinguish the flames. Biebrza is home to 59,000 hectares of wetlands, wildlife such as moose, beavers, and unique species of birds, and hiking trails.

"It is impossible to calculate the loss. This is a tragedy, it cannot be described. We may have to fight this fire for months," park employee Janina Agnieszka Zach, told Polish broadcaster TVN.

Environment Minister Michal Wos said that the fire, which began burning on Sunday, was likely caused by illegal grass burning – a method sometimes employed to clear swaths of dead grass.

"Fires in the Biebrza National Park break out every year, but such a large one has not been there for years. The situation is very serious," Wos said in a statement.

"The wind and the unique drought this year make it very difficult to put out the fire," the ministry added. More than 100 firefighters were dispatched to the scene

A smaller wildfire also broke out in the Dutch town of Herkenbosch on Wednesday, a sign of Europe's ongoing drought. There are worries now across the EU that drought brought on by man-made climate change, compounded by the lack of workers available to travel across borders to harvest food, could wreak havoc on the bloc's food supply chain.

Polish environmentalists called on their government to change its wasteful water policies, which they said were partly to blame for the fire.

"We regulate rivers, straighten their banks, conduct harmful maintenance works, which accelerate the outflow of water, we build dams and hydrotechnical barriers, dry marshes. We forget that it is natural rivers and their valleys that counteract drought, and wetlands are the best areas for natural retention," said World Wildlife Fund (WWF) Polska in its latest report on drought in Poland.

The WWF Polska has also noted that "agriculture is a major sector affected by losses from extreme weather phenomena," and that "drought is one of the most common threats" influencing agriculture.

Last year, Poland announced a 14 billion zloty ($ 3.3 billion) plan to fight drought, which focuses on water retention throughout the country. In response to the blaze in Biebrza, President Andrzej Duda called on Wednesday for Poles to use water more responsibly, but did not announce any concrete steps.

Around 4,000 people have been driven out of their homes in a village in the southern Netherlands due to a fire burning in a nearby nature reserve. (22.04.2020)