Six months ahead of the European elections, Germany's Green Party has formally adopted its manifesto. It plans to demand a unified European asylum law and campaign for taxes on tech giants and Europe's worst polluters. 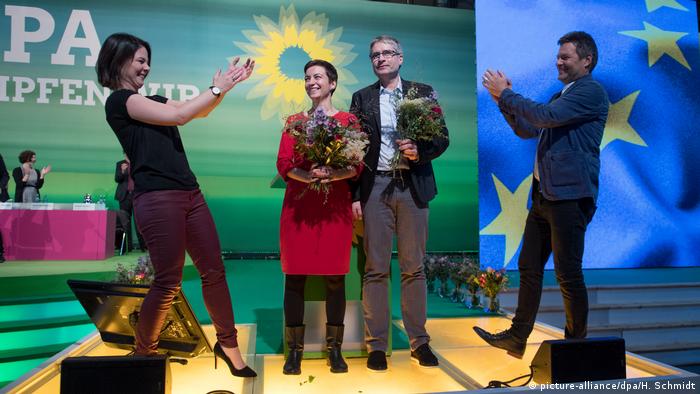 Germany's Green Party wrapped up its congress in the eastern city of Leipzig on Sunday, vowing to demand a new EU-wide asylum system during next May's European elections.

"The right to asylum is not negotiable," proclaims the party's European program, and urges a common European law that allows labor migration from outside the bloc.

The manifesto calls for all applicants to be offered a fair asylum procedure, where they are registered at the EU's external borders, have their applications processed in a timely manner, and are then fairly distributed among member states.

Currently, delays in registering and processing asylum claims are partly responsible for migrants traveling to other EU countries, where they live under the radar.

Despite opposition from some delegates, the party agreed on a controversial statement that "not all who come can stay," referring to growing public demand for EU states to speed up the return home of failed asylum seekers.

Through their climate policy, the Greens vowed to increase taxes on those corporations that emit the most greenhouse gases. The manifesto demands a minimum carbon dioxide (CO2) levy for power and industrial plants across Europe.

A pledge to push for an EU-wide tax on disposable plastics was also adopted. The party manifesto said such a levy would provide an incentive to reduce packaging waste by making raw materials more expensive.

The Greens also agreed that corporations should be taxed more consistently in light of several scandals where it was revealed that multinationals pay little to no tax in EU states. The party manifesto calls for a single European corporation tax, as well as a digital tax for tech giants such as Facebook and Google.

The party also wants the EU to become a "guarantor of social rights," that would be enforceable before the European Court of Justice.

On Saturday, the Greens picked two familiar faces to be the party's top candidates for the European polls, slated to take place from May 23 to 26. MEPs Ska Keller and Sven Giegold will lead the party into the election campaign.

Police, meanwhile, said they were hunting five people who allegedly caused damage and abused delegates at the Green congress on Saturday night.

A party spokesman said the suspects waited outside the conference site and that they were "young Nazis" shouting "Heil Hitler."

Germany's Greens are the most popular environment-led party in the world, and are currently showing second only to Chancellor Angela Merkel's conservatives in opinion polls in Germany. The party currently holds 11 seats of Germany's 96 seats in the European Parliament.

While Merkel's coalition dives in the polls, the Greens have been riding a wave of support. Decades after their rebellious arrival on Germany's political scene, the party is poised to become part of a new establishment. (12.10.2018)