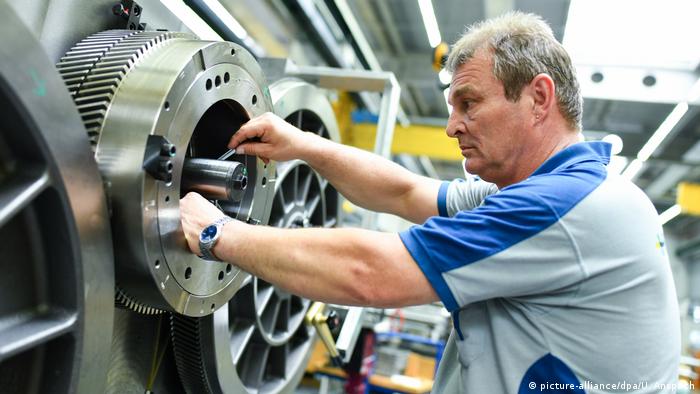 It's an astounding figure: minus 10.1%. Never before in Germany's postwar history has the country's economy slumped as sharply as in the second quarter of 2020. This is a historic day —many years from now, this figure will still be taken as a reference point when things start to go downhill.

Before the pandemic, that reference point was the 7.9% contraction in the second quarter of 2009 when the global economy was on the brink of collapse in the wake of the great financial crisis.

The question of whether there would be a double-digit contraction has at least been answered.

Read more: How Germany's economy would cope with a second wave

Of course, all the forecasters are now trying to look ahead and point out that after the loosening of the two-month lockdown, the economic engine has started up again and the low point is behind us.

From dark basement to light

The economy will "certainly" grow again in the third quarter — in fact it will grow significantly. Some surveys have even signaled a "rapid upturn" back on the growth track.

Others have noted a "noticeable easing of pessimism" among businesses.

All this does not require any in-depth knowledge of the subject: after all, the German government has put together the largest conceivable economic stimulus package, which has quickly begun to take effect.

And what's more: Anyone coming out of the dark basement will see the first ray of light comparatively quickly.

The bad news: That's all the good news for now. As helpful as the billions from government aid packages and regulatory exemptions are at the moment, they often mask the problems many companies had before the onset of COVID-19.

But this nasty virus not only makes people sick or even kills them, it also mercilessly brings the problems of companies to light.

So if they were barely able to keep their heads above water before the pandemic, maybe the money from Berlin will help for now. But when the support is gone one day (and that day will come), it will be dark and gloomy for many.

A planned economy instead of a market economy?

After all, how long can the state keep its protective umbrellas up, shield companies from bankruptcy and intervene in the market? It's part of everyday life in a market economy that companies come and go because they cannot withstand the storm of crisis.

According to a survey conducted by the Munich-based Ifo Institute for Economic Research, one in five companies believes its existence is threatened by the coronavirus crisis.

The credit insurer Euler Hermes has forecast an "unprecedented wave of bankruptcies," which will also affect Germany. And it could affect any industry. Aviation and tourism are particularly at risk. But sectors that have been suffering for some time — like retail, for instance — also face challenges.

The creeping decline of Germany's traditional department stores, the remnants of which operate under the name Galeria Karstadt Kaufhof, will be dramatically accelerated by the crisis.

The situation in the automotive industry is similarly bleak and poses a real threat to the labor market. Business has been bad there for some time now, with the sector acutely affected by the diesel emissions cheating scandal and the imminent transformation away from the internal combustion engine. And now COVID-19 has been acting as a catalyst to accelerate change.

The trade union IG Metall sees around 300,000 jobs at risk. And it's not just the big car manufacturers that are at risk, but also many medium-sized suppliers or machine tool makers. Of the latter, no less than 80% of the more than 6,600 companies have complained about a "noticeable or serious" decline in demand. The machine tool sector employs over 1 million people, more than the automotive industry.

What needs to happen now

Not enough bad news? The extremely export-oriented German economy is likely to suffer all the more as important markets like the United States, as well as countries like Brazil and India, are not really getting the pandemic under control.

And there's another problem: The number of companies with high debts and low profits is currently increasing dramatically, not only in Germany but also in other European countries and the US. In other words: The profits will not be enough to pay the interest due.

It's a vicious circle. Debt in itself is not a bad thing. Volkswagen, for instance, has a debt of $192 billion (€163 billion) — no. 1 in the world in the list of indebted firms — but the company can always service its creditors. That's what matters. Nevertheless, many companies cannot do exactly that because of the pandemic.

What has to happen now, so that autumn and winter — in the grips of a possible second coronavirus wave — don't become even darker? The German government must examine where it can help in specific areas, where perhaps the economic stimulus package needs to be readjusted. Above all, the short-time working scheme must be extended and the insolvency law must be adjusted.

Perhaps there will soon be a vaccine, and everything will be fine. However, for many companies which have the wrong business model, even that could be too late.

Mexico: Gang violence erupts in US border cities 5h ago