Coronavirus leads to record drop in German GDP | Germany | News and in-depth reporting from Berlin and beyond | DW | 30.07.2020 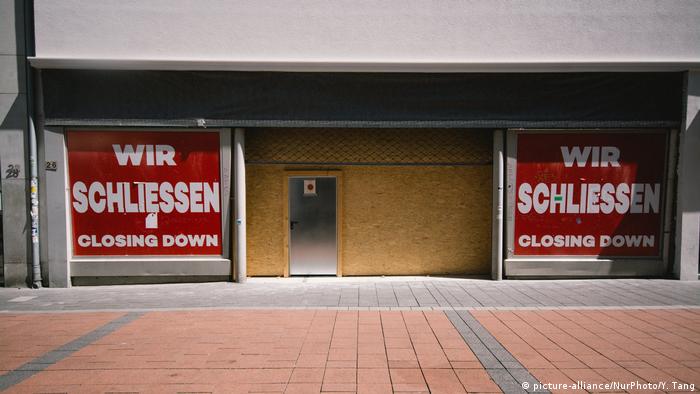 Germany's gross domestic product (GDP) fell by 10.1% in the second quarter of 2020, according to economic data released on Thursday.

The data from Germany's Federal Statistic Office comes amid fears of a second wave of the coronavirus pandemic across Europe.

"This was the sharpest decline since the quarterly GDP calculations for Germany began in 1970," the statistics office said.

Compared with last year, Thursday's figures were even worse. GDP was down 11.7% for April to June, with an overall collapse of exports and household spending alongside an increase in state spending.

"It's clear that it was a really horrible quarter for Germany," DW's Chelsey Dulaney said. "We saw declines basically across the entire economy."

In March, Germany's panel of economic advisers agreed that the unfolding coronavirus crisis would deal a severe blow to the country and predicted a 2.8% drop in gross domestic product for the year as a whole.

That calculation was based on the assumption that lockdowns would last for no more than five weeks and restrictions would be eased swiftly thereafter.

The government has introduced a multibillion-euro package including emergency loans, credit guarantees and tax breaks to soften the impact.

The data comes ahead of figures for France and Italy, to be released on Friday, which are expected to show a similarly dismal fall in output.

In addition to the drop in GDP, some 6.7 million people were enrolled in a German state-funded furlough scheme in May, up from 6.1 million the previous month, the Federal Employment Agency says.

However, the jobless rate for July held steady at 6.4%, unchanged from June in a sign that the initial effects of the pandemic were easing.