Cardinal Rainer Maria Woelki raised eyebrows during a meeting where he reportedly said Pope Francis was "out of touch with reality." The Cologne archdiocese said the remarks were not intended to be disrespectful. 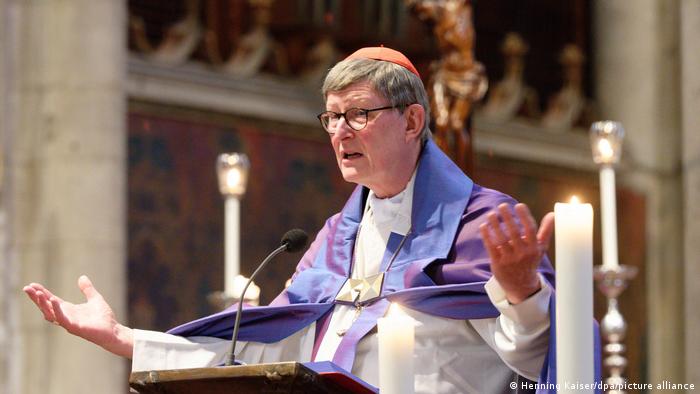 Woelki said he hopes to remain archbishop of Cologne, but said the decision lies with the pope

A high-level church meeting with Cardinal Rainer Maria Woelki ended on a sour note for some participants on Saturday, after the controversial archbishop caused a stir with his remarks on the pope, news agency dpa reported.

Woelki has faced mounting criticism in recent months over his handling of reports of sexual abuse in Cologne — Germany's largest Catholic archdiocese. The cardinal offered to resign as archbishop in March, but Francis has yet to make a decision.

What did he say about the pope?

Woelki appealed for a new start and a second chance as archbishop during a closed meeting with Cologne's pastoral council on Friday and Saturday.

But his comments on Pope Francis sparked alarm among some of the 60 participants.

The cardinal referred to Francis as "an old man" who was also "out of touch with reality," several attendees told dpa.

An archdiocese spokesperson confirmed to dpa that Woelki had called Francis an "old man" but emphasized that the remarks were not meant to be disrespectful to the 85-year-old pope.

Other participants appeared to appreciate Woelki's candor and his proposals for reform — including no longer having a theologian head up the administration of the Cologne archdiocese.

"We experienced an honest, authentic bishop," one participant told dpa.

The archdiocese's statement on the meeting did not mention the controversial comments, neither did a write-up of the meeting in Germany's Catholic News Agency (KNA).

Why is the cardinal controversial?

Woelki has faced months of mounting pressure over his handling of allegations of sexual abuse in the Church.

Last year, Pope Francis said Woelki had made "major mistakes" and sent him on a five-month sabbatical.

In early March, he tendered his resignation — but Francis has yet to decide whether to remove him as archbishop.

Much of the controversy erupted in 2020 over Woelki's decision not to publish an expert report on sexual abuse in the Cologne archdiocese.

At the time, he faced considerable public backlash but cited legal reasons for not releasing the information.

A second report found hundreds of cases of suspected sexual abuse in the archdiocese between 1975 and 2018.

The investigation revealed that high-ranking church officials failed to take care of alleged victims — most of whom were under the age of 14. Officials, furthermore, did not follow up on, report or sanction suspected cases of abuse.

This report was written in part with material from the dpa news agency.

Coming out in the Catholic Church