Rainer Maria Woelki, the controversial archbishop of Cologne, has come under fire for his handling of abuse cases in the Catholic Church. 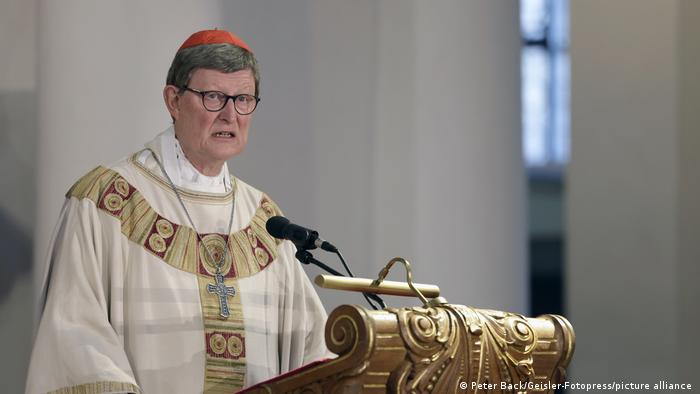 Cardinal Rainer Maria Woelki, the archbishop of Cologne, has offered his resignation to Pope Francis after facing criticism for how he dealt with allegations of child abuse in the Church.

The Cologne archdiocese said Wednesday that the pope would make a decision on the matter "in due course."

Cardinal Woelki is expected to remain in his post in the meantime.

"I placed my service and office as Archbishop of Cologne at the Holy Father's disposal, so that he is free to decide what best serves the Church of Cologne," he wrote in a letter to his congregation.

Woelki took a five-month break from his duties in September after the Vatican accused him of "major mistakes" in his handling of reports of sexual abuse at the hands of priests.

What is the cardinal accused of?

Cardinal Woelki faced public backlash in 2020 for deciding not to publish the results of an expert report he himself had commissioned on sexual abuse in Cologne, Germany's biggest archdiocese.

He cited legal reasons for not releasing the information.

A second report found hundreds of cases of suspected sexual abuse in the archdiocese between 1975 and 2018. The 800-page investigation revealed that high-ranking church officials had failed to take care of alleged victims, most of whom were under the age of 14, and had neglected their duties to follow up on, report or sanction suspected cases of abuse.

Reporters walked out of a press event in Cologne after church officials asked them to sign a confidentiality agreement. The officials were due to discuss issues around a key report on child abuse.

Auxiliary Bishop Angsar Puff has apologized to journalists over a contentious video message. He pivoted from discussing fake news, Trump and Goebbels, to insinuating unfair media coverage on Catholic bishops.

Germany's largest Catholic diocese commissioned the independent report into years of abuse by clergy. The report names over 200 abusers and more than 300 victims. Two clergymen were immediately discharged.