Germany's largest Catholic diocese commissioned the independent report into years of abuse by clergy. The report names over 200 abusers and more than 300 victims. Two clergymen were immediately discharged. 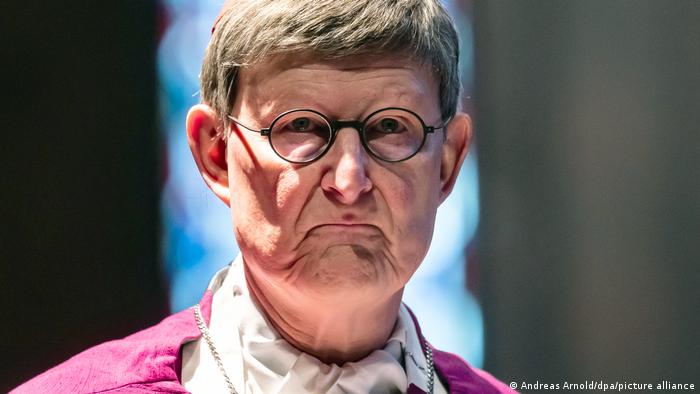 Cardinal Woelki has not ruled out stepping down

The long-awaited report, commissioned by the diocese of Cologne, was presented by Björn Gercke, an attorney from a Munich law firm that conducted the investigation. He spoke of having examined "poisonous files" in reference to documents detailing evidence of abuse committed by priests and attempted cover-ups of those crimes.

Gercke said his team had spent five months going through thousands of files going back to the 1940s and had conducted interviews with victims.

He said that in many cases missing documents had held up the investigation, but he praised the diocese for their support and openness in the process.

The report identified around 243 abusers of minors — priests or lay people working for the church — and at least 386 victims between 1946 and 2018, not all of them falling under the jurisdiction of the Cologne diocese. The victims in some 55% of cases were children under the age of 14 and around half of the cases dealt with sexual violence, the rest with verbal or other physical abuse.

Almost two-thirds of abuses were carried out by members of the clergy, the rest by laypeople. The report also indicated a clear rise in reported abuse between 2004 and 2018.

Following the presentation of the report, Archbishop of Cologne Cardinal Rainer Maria Woelki announced he would be discharging two members of the clergy in his diocese, including a bishop.

"What we have seen shows clearly there was a cover-up," he said. "I am ashamed."

Much of the abuse was well known and well documented, Gerke said. Woelki's predecessor, Cardinal Joachim Meisner, who died in 2017, was found to have compiled many pages of evidence on members of the clergy who were abusers in a file Gerke referred to as having been labeled "Brothers in the Mist," a  term referencing abusive priests.

Abuse of minors committed by clergymen is a topic that Germany's Catholic Church has been dealing with since 2010. The Church commissioned an earlier investigation covering the time period from 1946. When it was published in 2018 it spoke of 3,677 victims and 1,670 perpetrators. And each year more cases are added, as crimes that have been covered up for decades come to light.

Many members have left the Church because of the scandal. The revelations about the German Church echo those made in the Irish, Australian, US, and Chilean Catholic Churches. There are tens of thousands of victims around the world.

The latest 900-page report quotes from a letter written in 1984 by Cardinal Höffner, Archbishop of Cologne from 1969 to 1987 and one of Germany's most prominent clergymen, to a priest who had been accused of abuse.

"I am so sorry that you are facing such difficulties right at the beginning of your tenure. I have asked my staff to look into the allegations. Nobody here takes them seriously," Höffner wrote. Sentences like these show how allegations were dealt with: They were ignored and nothing was reported to the Vatican.

Decades of crimes and cover-ups

The new report documents the actions of Cologne's Catholic leaders from 1976 to 2018. Cardinal Höffner is singled out as having committed serious breaches of duty, but his successor Cardinal Joachim Meisner, an ultra-conservative and reactionary archbishop, who held office from 1989 to 2014 is accused still more damningly. One-third of all cases were documented during his time in office. Meisner neglected his duty to investigate, report, and sanction abuse and abandoned the victims, according to the report.

The investigators summed up the report as identifying "years of chaos, subjectively perceived lack of competence and misunderstandings."

Cardinal Woelki himself was not found to have committed any breach of duty. This announcement came as a surprise to many.

Woelki had drawn ire for keeping an earlier report under wraps for months. Later journalists were offered a chance to read the report if they committed themselves to secrecy.

He cited legal concerns, saying that the perpetrators may have a right to privacy. People in the church were infuriated to learn that Woelki had been made aware of the crimes committed by an elderly priest, named as "Father O." Woelki declined to report the priest's assault on an acolyte in 2015 to officials in Rome, arguing the priest was old and unfit to stand trial.

This may have been an ethically questionable decision, Gerke admitted, it was not an offense. The investigator stressed he was only concerned with legal matters.

The latest report, however, blames several high-up church figures for having neglected their duties, including the current Archbishop of Hamburg Stefan Hesse, who was an assistant to Cardinal Meisner from 2006 to 2014. Just hours after the presentation of the report, Hesse offered the pope his resignation.

The investigators point to systematic deficiencies and weaknesses: They found patchy documentation, evidence that leading clergymen had been unaware of legal requirements, and a lack of clear hierarchies and responsibilities.

While the church is quick to criticize and punish laypeople for any wrongdoing, the report stated, this was not the case for criminal clergymen.

Cologne Archbishop Woelki received the report after Gerke and his team had finished their presentation. In a five-minute statement, he said he'd been "eagerly anticipating" this day but had also been "dreading it like nothing before."

The cover-ups, he says, will have to bear consequences for the individuals who failed to report the crimes. They prevented an investigation and the punishment of perpetrators. "Actions weigh more than words," Woelki said calmly and announced that he would send a copy of the report to Rome immediately.

Archbishop Woelki, who is also a cardinal, has not ruled out stepping down but announced a press conference for Tuesday next week. Much of both reports will not be published until later in March and the church is not expected to formally respond until then.

Several of Germany's 27 dioceses have commissioned and published reports on abuse.

In wake of the scandal, demand has risen for people looking to formally leave the church in Germany. In Cologne, the numbers have been dramatic.

While the report was being presented, demonstrators outside Cologne Cathedral declared their support for the victims. They expressed disappointment at the findings, and surprise at the lack of criticism of Cardinal Woelki's actions. They vowed to continue their protest.