Child abuse scandal: Germany′s Catholic Church fights for its future | Germany | News and in-depth reporting from Berlin and beyond | DW | 26.01.2022 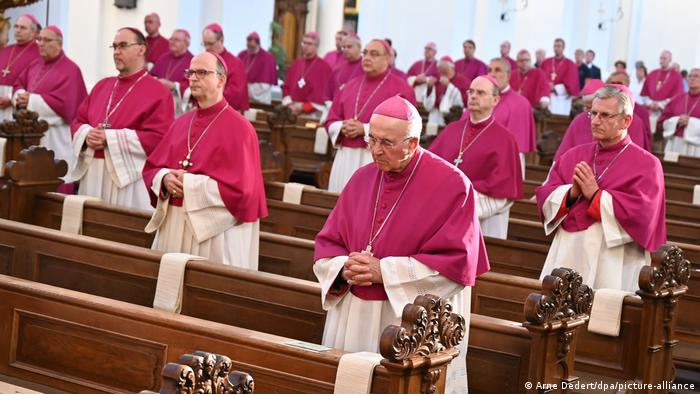 A perfect blue sky hangs over Aachen Cathedral. The crisp winter sunlight illuminates more than 12 centuries of church history, constructed on Charlemagne's orders and the site of coronations of dozens of Germany's kings and queens.

But all is far from well behind the ornate facade here in the city on Germany's western border with Belgium and the Netherlands. In his Sunday sermon, Aachen Bishop Helmut Dieser spoke of wrath and disappointment, outrage and dismay, suffering and doubt.

He was referring to the reactions expressed in response to a Munich law firm's report, published on Thursday, into the church's handling of clergy who for decades covered up the sexual abuse of children.

The report includes grave allegations against former Pope Benedict XVI. As Cardinal Joseph Ratzinger, he was the head of the Munich diocese from 1977 to 1982. During that time, he took part in a meeting where he and others discussed the future of a priest accused of repeated misconduct who, it was agreed, would be transferred from Essen to Munich. Where he continued to abuse children.

"What appalls me and leaves me distraught, but also angry, is the incalculable extent of individual suffering and, inexorably linked with it, the extent of the failure for which church leaders, bishops and their staffs were and are responsible," said Bishop Dieser in his sermon.

"And beyond that, there is the inability to recognize one's own guilt and ask for forgiveness, or at least to express regret and pain for one's own part in the tragedy."

Even as Dieser delivered his sermon on Sunday, Benedict was still standing by the claim that he had not attended the gathering at which the Essen priest's future was decided.

However, after it became clear that his name was in the official list of participants, the former pope revised his statement on Monday, speaking of a "mistake" and claiming that he had not acted "out of bad faith." The statement said that while he attended the meeting that discussed the priest's future, Benedict insisted that no decision was made during the discussions he was part of.

Even a former pope can be found guilty

But there are many in the Catholic Church who have run out of patience with such statements.

"It can't remain the case that those responsible hide their shame by pretending to know nothing about what was going on, or claiming that things were done differently back then," said Dieser.

"This was the very same thinking that prevented perpetrators from being stopped and left children exposed to abuse!"

Even a former pope must be called to account for his guilt, and he must confess to that guilt, "not only in prayer, and not only when he goes to confession," the bishop said.

Ordinary passers-by were also shared their outrage to DW outside Aachen Cathedral on Monday.

"It's time for priests to take a stand," one elderly man demanded. He and his wife are in no doubt that the abuse scandal, and the fact that it was for decades covered up, have done almost irreparable damage to the Catholic Church.

"I'm sure that now more than ever people will turn their backs on the church," said the woman.

People of faith must justify their acts

These days, little remains of the euphoria with which many in Germany welcomed the election of a German pope as the head of the Catholic Church. "We are pope!" proclaimed the headline of Germany's biggest tabloid back in 2005.

Now, however, that enthusiasm has faded, and a growing number of German bishops are calling on Benedict to admit the full extent of his guilt in the child abuse scandal.

The situation is unbearable for many of the faithful, says Georg Bätzing, the bishop of Limburg, who also serves as chair of the German Bishops' Conference. They find themselves having to justify to family and friends "that [those complicit] are still members of this institution."

Regardless, all must face up to the damage done by "disastrous behavior" at the very top, among the church leaders, "and right up to the former pope."

And he goes on: "I understand everybody who is tortured by doubt in the church and the leaders of our church. And when I look at the facts that have emerged in Munich, then I can only say that I am ashamed of this church."

That clear choice of words from Bätzing gives some encouragement to lay members of the Catholic Church. "I see many among the bishops who have the best of intentions. It would be far from fair to tar them all with the same brush," says Irme Stetter-Karp, president of the Central Committee of German Catholics.

She, too, is shocked and appalled about the extent of the cover-up: "The systematic failure to take responsibility," with which the church has reacted to the abuse scandal, must now come to an end, she told DW.

Stetter-Karp is among the many who are desperately disappointed with Pope Benedict's role in the scandal: "From my point of view, this has been anything but well-handled. The way that he revises previous claims only when it is impossible to go on denying the truth; what we need to see now, is his taking unqualified personal responsibility for his previous failings." 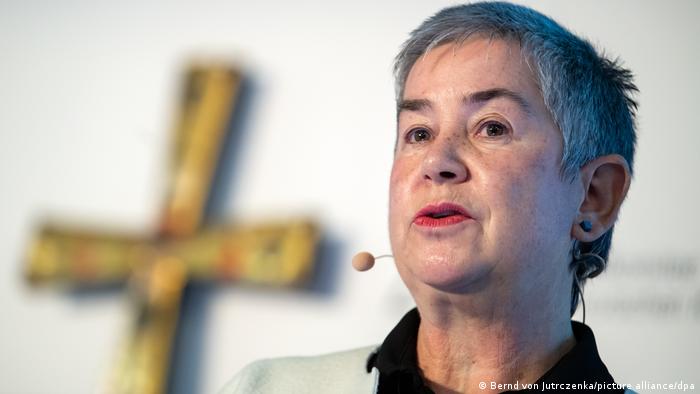 'Don't tar all bishops with the same brush,' says Irme Stetter-Karp, President of the Central Committee of German Catholics

The Central Committee of German Catholics is the largest lay organization in the Catholic Church in Germany. Together with the German Bishops' Conference, the committee has set in motion a two-year reform program known as the "Synodal Path," which has emerged as a possible way forward from the abuse scandal.

At the beginning of February, lay members and clerics are set to meet for the Third Synodal Assembly.

"What I hope for from this milestone, this gathering, is either real progress toward reform, or we will find ourselves at a very critical juncture that could ultimately lead to the failure of the Synodal Path," Stetter-Karp told DW.

In her view, the time has come for the truth, and nothing but the truth — and not just admitting that which can no longer be denied. "I think that we are facing a very serious test."

Large numbers of young worshippers are officially leaving the Catholic Church each year. This is having a massive impact on the church's youth organizations, said Gregor Podschun, a member of the executive committee of the Federation of Catholic Youth.

Many young people are no longer sure that they have a spiritual home in the church, and some have approached the federation's youth organization to find out whether they can officially leave the main body of the church while remaining in the youth organizations.

"What we are seeing is a lot of young people beginning to question their faith," Podschun said. They sense that as an institution, the church has very little to do with the Bible.

Podschun wants to keep the doors of the church open for young people who are unhappy with developments in the church. He, too, is exasperated with the way things often seem to be going. "It's not about the church saving itself," he said.

"If we want to ease people's suffering, and if that means tearing down the church as we know it, then so be it. And, after that, the next step can follow: rebuilding the church."

The Munich report did not come as a surprise, Podschun told DW.

"The church has monarchical structures, it's highly centralized, it's a system that exercises power on behalf of the Vatican. So, it's not really surprising how things that would be damaging to the church are covered up."

As a young Catholic himself, he hopes that all the damage and distress will prompt the church "to think seriously about expressing regret, and seek a new course."

A report about how the archdiocese of Munich handled cases of sexual abuse by priests makes for devastating reading and tarnishes the image of the retired Pope Benedict XVI, says DW’s Christoph Strack.