Opinion: Pope Benedict′s defense is outrageous and tragic | Europe | News and current affairs from around the continent | DW | 21.01.2022

A report about how the archdiocese of Munich handled cases of sexual abuse by priests makes for devastating reading and tarnishes the image of the retired Pope Benedict XVI, says DW’s Christoph Strack. 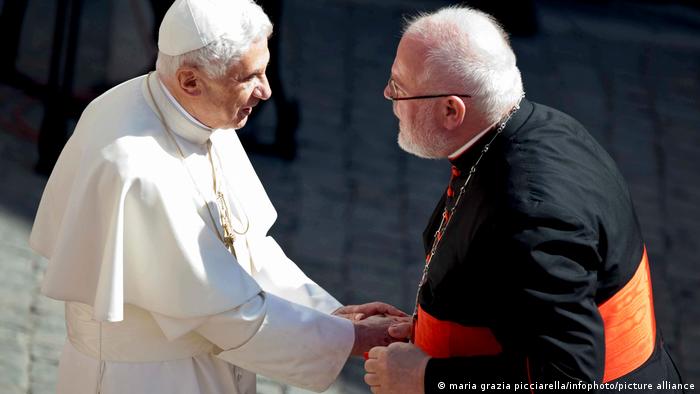 Cardinal Reinhard Marx, right, has been the archbishop of Munich since 2007, while retired Pope Benedict XVI was in that position from 1977 until 1982

Before Joseph Ratzinger became Pope Benedict XVI in April 2005, critics called him the "Panzerkardinal," or "tank cardinal," in reference to his sharp, dogmatic views: someone who uncompromisingly defended the church's traditional doctrine. Soon after his election to pontiff, there were reports that the reportedly tough ex-cardinal was capable of laughter and was even a softie, to everyone's surprise.

Now, Ratzinger is being described in a new way. One of the lawyers, whose office spent many months investigating abuse in Ratzinger's former diocese of Munich, said he had a "very rocklike way of dealing with things" — in reference to the accusation that he covered up abuse in the church.

A 'catalog of horrors'

The approximately 1,900 pages that a Munich law firm has compiled on the archdiocese of Munich-Freising's handling of sexual abuse cases are a "catalog of horrors."

One of the lawyers says so literally, several times. The thick volumes are also a document of church history — they represent a new dimension, a new stage in the investigation of sexual abuse.

Since 1952, six archbishops have headed the archdiocese in Munich. All of them had been cardinals before or were elevated to cardinals while in office. All six, without exception, were guilty, to varying degrees, of clear misconduct in dealing with sexual abuse cases. Three of the six are still alive.

And, from 1977 to 1982, Ratzinger was archbishop of Munich, and then continued his career in Rome and ascended to the top of the Catholic Church as Pope Benedict XVI in 2005. That's why the global Catholic community watched with bated breath the events in Munich on Thursday this week.

With regard to the five years that Ratzinger spent in Munich, the experts speak of four cases of misconduct in which the archbishop should have acted against abusive priests but did not. For example in the case of priests, whose acts of abuse were known, but who nevertheless continued with pastoral work.

Ratzinger himself reacted to the allegations in an 82-page written statement. In it, he rejects "allegations," claims ignorance of certain events or even says he does not remember them at all. He also firmly denies having attended a committee meeting at which a particularly nasty case of a cover-up was discussed. The experts from the law firm, however, prove with credible details that Ratzinger was there after all.

Church can't deal with the past on its own

Ratzinger's letter is an outrageous and, at the same time, tragic document. It's hard to read when this great theologian explains that for a canonical judicial procedure to be opened would have required "an offense directed at the arousal of sexual desire.” Let's not forget, we're talking here about minors!

In light of the report by the Munich law firm, there are four points worth holding on to:

1) It's important that the lawyers repeatedly and explicitly addressed the importance of the victims and the survivors of sexual violence and thanked them, appreciated their courage and their openness. That's something they didn't attribute to any clergyman. And they are right to demand that an ombudsman's office be set up to represent their interests. This is about dealing appropriately with victims, which the church can hardly do itself.

2) It is important to look at the parishes where abusive priests worked and which the church should be monitoring more closely. Entire communities, friendships and families have already been divided over allegations, assumptions and disappointments. Here, too, the church is sinning against its base.

3) The church obviously cannot deal with the past by itself; the state judiciary must intervene more decisively. That is evident, and not just because of Ratzinger's coldly worded statement. Two days before the publication of the Munich report, an archbishop testified for the first time in Cologne ⁠— another hot spot of church cover-ups and appeasement ⁠—  as a witness in the proceedings against a priest and alleged sexual offender. The dignitary, Archbishop Stefan Hesse of Hamburg, suddenly stood before the judge and had to answer concisely, precisely and,  according to those present, meekly. This demonstrates that state prosecutors or judges should be pushing the legal process forward. The state, if it wants to at all, should take over prosecuting the crimes. This would also mean that victims would no longer have to face the perpetrators or their organizations.

4) And finally, the fourth point is that this clerical and episcopal-driven church that elevates itself and tries to cover up its filth is no longer the church of the present. If one can at all sense a line in Pope Francis' occasionally strange-sounding statements, it is the effort to keep alive the longing for God. And the church? Comes up somehow, too. But the exaltation of the past is over. The question is whether the Catholic Church will be able to cope with this.