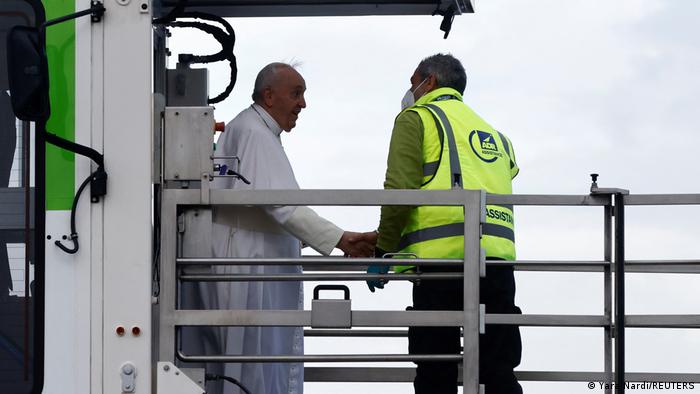 Pope Francis arrived in Malta on Saturday for a two-day visit that had been delayed by the COVID-19 pandemic. The religious leader is expected to speak in favor of migrants and in particular, encourage Europe's embrace of Ukrainian refugees.

But he is also expected to urge European nations to also welcome migrants coming from other places, including those seeking to reach Europe from Libya and elsewhere.

Malta is the EU's smallest nation with a population of around half a million and it has been at the center of one of Europe's recent migration crises.

Situated at the crossroads between North Africa and Europe on the Mediterranean Sea, the waters around Malta are the scene of attempted migrant crossings and rescue operations when those fail.

Pope Francis needed to take a wheelchair lift to board a plane to the Mediterranean island nation. Vatican spokesman Matteo Bruni said Pope Francis took the elevator to "avoid unnecessary strain." Francis, who is 85, suffers from sciatica, a nerve condition resulting in leg pains.

In February, Pope Francis had to cancel a trip to Florence, and he did not partake in the Ash Wednesday services this year due to acute pain in his knee.

Last July, Pope Francis was in the hospital for 11 days for surgery that saw the removal of part of his colon. Following his recovery, he made an intense trip to Hungary and Slovakia last September.

In general, Pope Francis is in good health but has complained of knee and leg pains in the past.

The pope has slammed Russia's invasion of Ukraine during an address to Malteses officials, without directly referencing Russia or Putin by name. The pontiff's comments left no doubt as to who he was referring to.

"From the east of Europe, from the land of the sunrise, the dark shadows of war have now spread. We had thought that invasions of other countries, savage street fighting and atomic threats were grim memories of a distant past," Pope Francis said.

"Once again, some potentate, sadly caught up in anachronistic claims of nationalist interests, is provoking and fomenting conflicts, whereas ordinary people sense the need to build a future that, will either be shared, or not be at all," the pope added.

The pope told a reporter that a trip to Kyiv was being considered although there were no further details available.

Francis's trip to Malta was originally scheduled for May 2020. But the outbreak of the coronavirus pandemic changed the Argentinian pontiff's plans.

Over the weekend, he is expected to celebrate Catholic Mass with thousands of believers is planned near the capital Valletta.

The pope has planned to sail on a catamaran to the Maltese island of Gozo, to visit a national shrine there and pray in the famous St Paul's Grotto in Rabat.

But the 85-year-old religious leader also plans to meet migrants in a charitable institution housing some 50 people.

German rescue organization Sea-Eye called for the pope to appeal to Maltese government officials to help will help it find a safe haven in Malta to 106 rescued migrants currently on board one of its boats.

The Sea-Eye 4 is currently moored off Malta. "It would be nice if the pope's visit makes a difference," a Sea-Eye spokesperson said on Friday. "Hope dies last."