Germany, China stress commitment to free trade ahead of Merkel's meeting with Trump

The leaders of Germany and China have stressed the importance of open markets during a phone call. Their conversation came ahead of Chancellor Angela Merkel's meeting with US President Donald Trump. 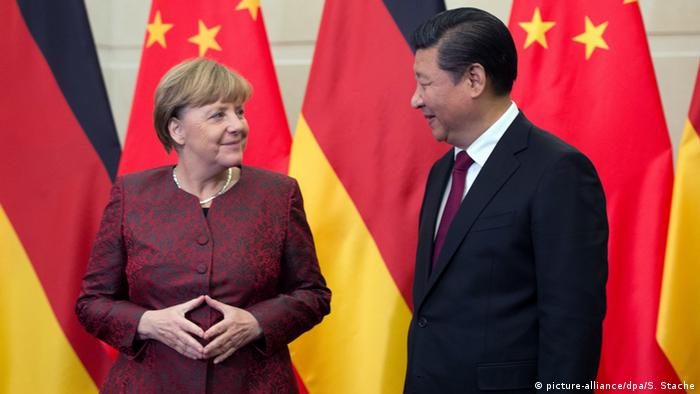 German Chancellor Angela Merkel and Chinese President Xi Jinping agreed to continue their economic cooperation ahead of Merkel's visit to Washington, D.C., the chancellor's office said in a statement on Thursday.

Merkel and Xi reaffirmed their support for free trade and open markets, as well as their commitment to working within the framework established by Germany's presidency of the G20, the government said.

The leaders also discussed "the conditions to expand electromobility in China which will allow the German auto industry to continue to be successful in the Chinese market."

The conversation comes ahead of two separate meetings on Friday, both of which could have important implications for the global economy. Merkel will be meeting with Trump in the US capital, the same day finance ministers from the G20 countries plan to meet in Baden-Baden for the start of a two-day summit.

Both meetings come amid growing concern over how the Trump administration, which has put its protectionist policies front and center, will work with the international community going forward. German Finance Minister Wolfgang Schäuble is planning to meet with his American counterpart, Steven Mnuchin, in Baden Baden.

On the agenda for Merkel's meeting with Trump will be the importance of continuing a relationship built on free trade. In the past, Trump has threatened to fine German automakers who planned to sell cars within the US that were made in other countries. The US president has also leveled threats at China, such as his desire to label the country a currency manipulator, which has sparked fears of a possible trade war between the two countries.

What German industry expects of Merkel's visit to US

German industry leaders have said they're optimistic about the outcome of a planned meeting between German Chancellor Angela Merkel and US President Donald Trump in the US. They hope current tensions can be defused. (13.03.2017)