The world's biggest high-tech fair has opened in the German city of Hanover. The CeBIT event follows revelations of vast spying by British and US intelligence agencies, which sparked a global debate about data security. 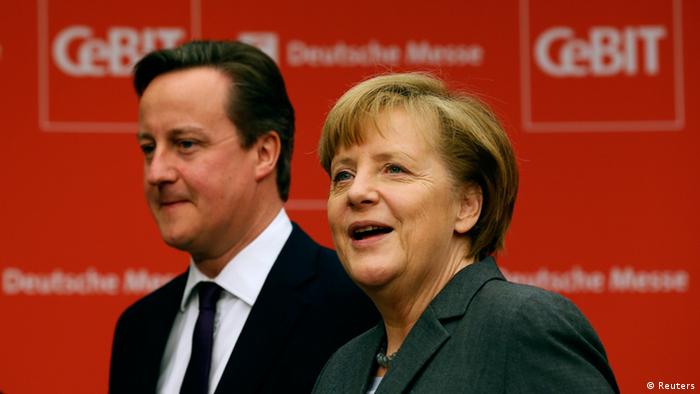 "This should also be a subject of intensive talks with our American partners," she said in her opening speech.

British Prime Minister David Cameron made no mention of the data snooping issue during his opening speech.

Britain is the official partner country at the five-day CeBIT event, which this year is focusing on the theme of "datability", meaning the ability to quickly and responsibly use large amounts of data.

As part of the opening, David Cameron focused on ways Germany and Britain could combine their expertise to collaborate on new ideas and innovations. He announced a joint British-German project to develop a new super-fast mobile network which would enable a full-length film to be downloaded on the Internet in one second.

The future-fifth-generation, or 5G network, would be a collaboration between Dresden University in Germany and Britain's King's College University in London and the University of Surrey.

Other areas of further collaboration announced by Cameron included the "Internet of Things", which means getting everyday objects to communicate over the internet, for example health monitors which could keep an eye on heart rates.

"We are on the brink of a new industrial revolution and I want us, the UK and Germany, to lead it," he said, announcing 88 million euros ($122 million) in funding to boost related research.

A major newspaper in Germany claims that the US National Security Agency has switched to monitoring officials close to Chancellor Angela Merkel. They include Interior Minister Thomas de Maiziere. (23.02.2014)

Germany is 'planning to step up counter-espionage': report

Germany is planning to possibly resume counter-espionage measures against several Western allies, according to a report in the news magazine Spiegel. The report said British and US embassies could be targeted. (16.02.2014)