Severe snowfalls in Austria and France have claimed five lives after the Alps region experienced multiple avalanches. Snow has cut off one German border town, while rail services in Bavaria and Switzerland have been hit. 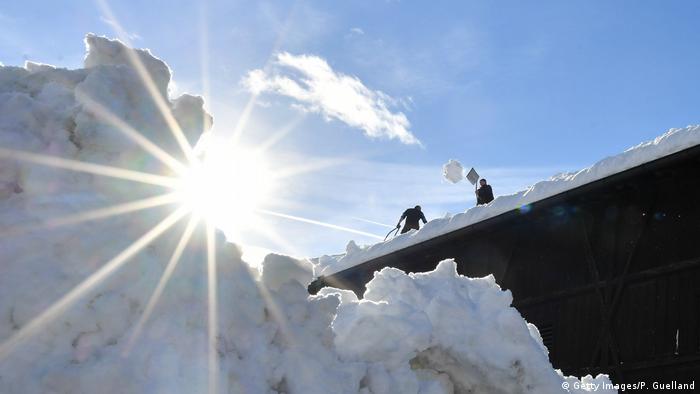 Southern Germany and Austria can expect further heavy snowfall over the next few days, forecasters have warned, after unusually severe weather left five people dead in the Alps region.

Up to 80 centimeters (31 inches) of fresh snow is expected above 1,000 meters (3,280 feet) until Tuesday, along with more than half a meter at lower altitudes.

The Haute-Savoie region's high mountain gendarmerie said the rare accident happened before the slopes around the town of Morillon were opened to the public. They explained how the patrollers, aged 44 and 53, sustained fatal injuries while attempting to stop potential dangers to skiers.

Forecasters had raised the risk of avalanches in the Savoie and Haute-Savoie region to "strong" (level 4 on a scale of 5) on Sunday because of fresh snowfall on the massifs overnight.

Rescue teams in Austria, meanwhile, continued to search for a 28-year-old German skier missing after an avalanche around the exclusive mountain resort of Lech in the state of Vorarlberg.

Three other German skiers, aged 32, 36, and 56, died after being buried by the snowslip on Saturday.

Police said the four friends had apparently skied onto a trail that had been closed.

The victims had suffered multiple injuries and showed signs of suffocation, despite deploying rescue airbags.

Southern parts of the German state of Bavaria are expected to see heavy snowfalls over the next two days. Since Friday, there have been numerous reports of accidents and road closures.

German soldiers were called out to help with snow clearing operations, and German Defense Minister Ursula von der Leyen said they would stay "as long as needed."

The winter sports resort of Balderschwang, close to Germany's border with Austria, has been cut off since Sunday morning as the pass leading to it was closed due to an avalanche.

About 1,300 residents and visitors were left stranded, but officials said power was still working and enough supplies were on hand.

The nearby ski area of Grasgehren was cleared, however, with 40 people evacuated.

Trains on part of the route between the German cities of Munich and Lindau, on Lake Constance near the Austrian border, were traveling more slowly than usual because of a risk that trees weighed down by snow could fall onto the tracks.

In central Switzerland, trains carrying cars through the Furka tunnel were suspended because of an avalanche on a nearby road.

Davos bills itself as a "cross-country-skiing paradise" – due to the fact that getting enough snow in the winter has always been as good as guaranteed. But now climate change is starting to have an impact. (28.12.2018)

Towering sculptures of ice and snow are enthralling visitors at the annual ice festival in the northern Chinese city of Harbin. Not to miss are the mini replicas of some of world's most famous structures. (05.01.2019)

Heavy snowfalls and rain have caused chaos in alpine Austria and northern Italy. Avalanche alerts apply in Austria's East Tirol and Italy's Dolomites and South Tirol. Italy's Po river are among those flooded.

Ski season is on again in Germany and Austria, with restrictions 12.11.2021