Landslides and less snow. Climate change is altering the Bavarian Alps | Environment | All topics from climate change to conservation | DW | 06.11.2018

Germany's Alps are already contending with climate change and locals are feeling the effects. Jennifer Collins reports from the country's highest peak on disappearing glaciers, less snowfall and increased landslides. 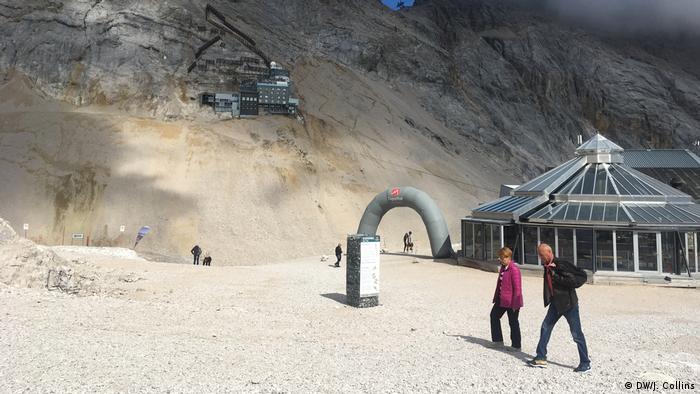 It's unseasonably warm on Germany's highest mountain, the Zugspitze. Thirty years ago, September would have brought freezing temperatures and the first snow flurries. Today, tourists explore the bare, snowless, moon-like rockscape in T-shirts and shorts.

A lot has changed on the mountain in those 30 years, said Toni Zwinger, who grew up on the Zugspitze in the southern German state of Bavaria. The 33-year-old's family has been running the Münchner Haus — an inn 2,959 meters (9,700 feet) up, just near the summit — since 1925, back when only intrepid climbers could reach it.

As a boy, Zwinger played around the glaciers and took trips to the Austrian side of the mountain for plates of French fries. He knew almost everyone then but now there are too many people on the summit — a steady stream of tourists and workers, he said, still wearing a blue denim apron, having just finished up after another busy day.

The glaciers of his childhood have all but disappeared too. The Northern Schneeferner has shrunk to a mere 25 percent of its 1950 volume. On the Southern Schneeferner, it's even worse as only 6 percent is left.

"This year was the hottest they've measured during the past 25 years," Zwinger told DW, sitting in a room in the inn decorated with wooden panels and beams. "You can see it with the glacier. It's getting smaller."

And in the evenings, he hears the boulders outside shifting. That's something scientists who have been researching climate change on the Zugspitze and surrounding mountains have also observed. 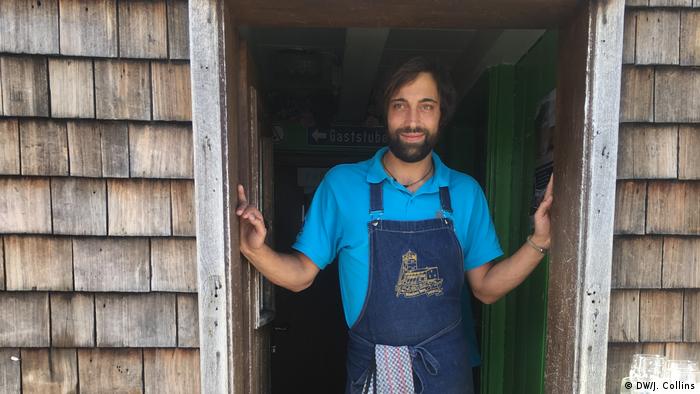 Toni Zwinger's family operates an inn near the summit of Germany's highest mountain. He's noticed the effects of climate change there over the last 30 years

As temperatures increase, the permafrost — a layer of sediment, rock or soil that remains frozen for more than two consecutive years and that stabilizes the mountain rock — is retreating too. That and increased rainfall, have caused the rocks to lose their stability, leading to more than a thousand rockfalls in the Alps in the past year, said Michael Krautblatter, a professor of landslide research at Munich's Technical University (TUM).

"People come here and expect me to tell them something about the future," said Krautblatter from a hotel-turned-research station on the side of the Zugspitze. "You just go in and you see how the permafrost changed over the last 20 years. Climate change is already here."

The view from above

For over a decade, Krautblatter has been visiting the Schneefernerhaus station to study changes to the permafrost of the German Alps in which the Zugspitze sits.

He and a small team of scientists load equipment onto a tiny private cable car for a few days' hands-on research in the station that will involve them donning climbing gear and scaling part of the mountain face to install measuring equipment. 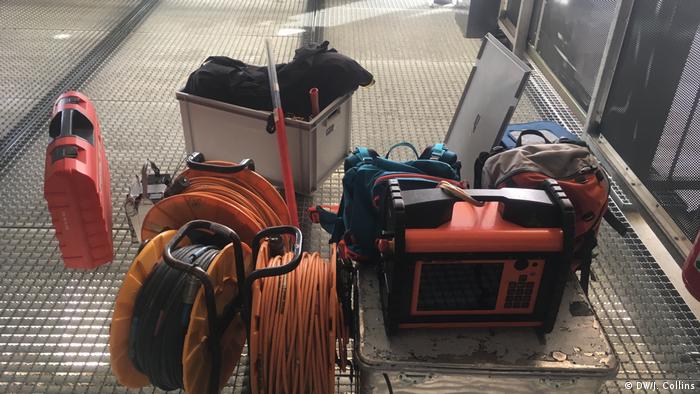 The Zugspitze has seen warming of around 1 degree Celsius since 1985, according to the researcher. Where temperatures in January once hit minus 20 degrees Celsius (minus 4 degrees Fahrenheit), they now get down to lows of minus 10 or minus 5 Celsius.

"This is not cool enough that it [the permafrost] would sustain over the summer," Krautblatter explains. In 10 to 15 years, there will be no permafrost left, he predicts. One strand of his research looks at how this will affect water resources downhill. But his team's predictions are also helping the region adapt to the changes and to improve early warning systems for landslides.

A number of Alpine huts have already begun to subside as the ground beneath them shifts, he said. Anchors for cable cars and other infrastructure will also need to be stabilized. Some traditional climbing routes have been closed for safety reasons too.

"I think we have to be very quick in terms of understanding these changing permafrost systems. Because the only way we can make it safe is understanding where things happen and then to try to avoid having people there," Krautblatter added.

The view from below

The village of Schwaigen-Grafenaschau lies just northeast of the Zugspitze. Landslides were always a problem for this tiny community of just over 600 people, nestled at the foot of a small mountain. But they're becoming more frequent, explained Hubert Mangold, the town's jovial, energetic mayor, dressed in denim shorts and a short-sleeved checkered shirt.

Back in 2016 after heavy downpours, a slow mudflow of boulders and rocks flattened a 30-hectare (74 acres) area, burying 40-meter high trees, said Mangold, speaking in a thick Bavarian accent typical of the region.

"It was the biggest mudflow in Germany. It still is," he said, gesturing to a bare spot on the otherwise forested mountainside 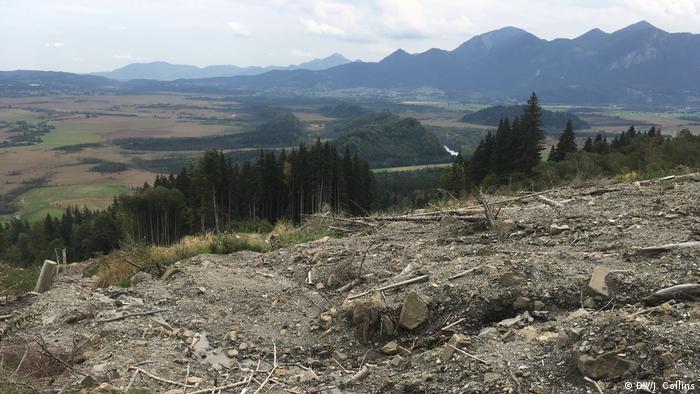 Nobody was hurt in the disaster but it cost the Bavarian forestry service and other private forestry businesses that operate in the woods a significant amount in damages. Mangold said the streets below the mudslide also had to be fixed. For him, there is no question it was all made more likely by climate change.

Researchers at the nearby Institute of Meteorology and Climate Research in the beloved Alpine holiday destination of Garmisch-Partenkirchen have made similar observations.

"It's having a big influence on snow," said Harald Kunstmann, a professor at the University of Augsburg and the institute's deputy director. "Because the precipitation that once fell as snow in winter is now largely falling as rain. That means it doesn't stay on the ground, but flows directly away in winter, increasing the risk of flooding."

Kunstmann has been working with highly detailed computer models to predict how the Alpine region will look by 2050 as the climate changes, partly to help communities prepare for what's to come. A 20 percent increase in rainfall is projected by mid-century in the region. 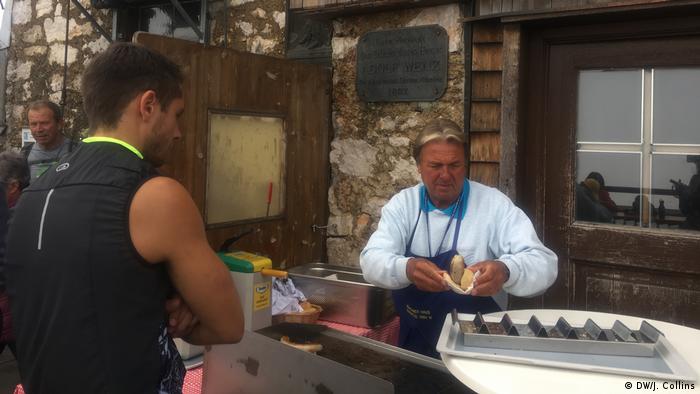 Will Zwinger's family still be selling sausages on the Zugspitze in 30 years time?

If the world continues on its current trajectory and overshoots the 2 degrees Celsius warming limit agreed in Paris in 2015, that would mean warming of 4 degrees in the mountains, said Kunstmann. Historically, the Alps have been warming twice as fast as the global average. There are a number of theories as to why that is, but the professor believes none sufficiently explain the phenomenon.

But if the predictions do play out, one thing is for sure: the Alps will look very different in terms of snow, glaciers, plants and animals, and the rock face itself. Whether businesses such as the inn run by Toni Zwinger's family for nearly a century will survive even another 30 years is an open question.