Germany and hydrogen — €9 billion to spend as strategy is revealed | Business | Economy and finance news from a German perspective | DW | 10.06.2020

Germany and hydrogen — €9 billion to spend as strategy is revealed

As part of its stimulus package, Germany intends to expand the role of green hydrogen to help end the country's reliance on coal. The government agreed on a plan on how to spend the €9 billion earmarked for the project. 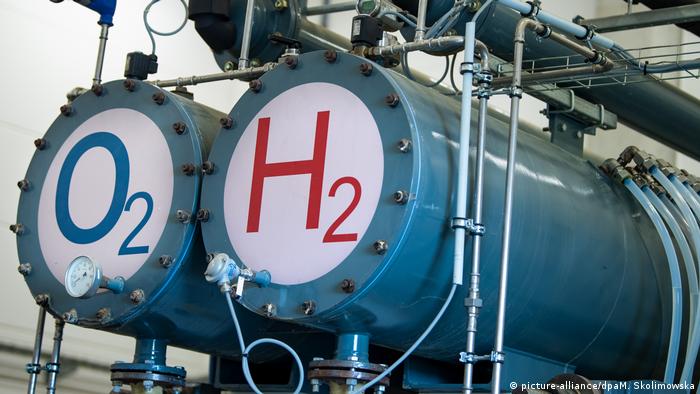 Hydrogen, the universe's most abundant element, has often been touted as a way to power vehicles and energy plants, but it is just too expensive. Most hydrogen used today is produced by reforming natural gas, which also releases a lot of carbon dioxide (CO2). Green hydrogen, on the other hand, is extracted from water by electrolysis, but it is still a very energy-intensive process.

Hydrogen's huge advantage, however, is that can be more easily stored than other forms of renewable energy and for longer periods of time, which is why it is a key part of Germany's energy transition (Energiewende) strategy, as Europe's No. 1 economy seeks to become carbon neutral by 2050. Last week, the government announced that it aimed to have 5 gigawatts (GW) of hydrogen production capacity by 2030, with another 5 GW a decade later.

The plan, which could see hydrogen eventually make up about 10% of the country's total electricity capacity, was unveiled as part of a €130 billion ($147 billion) stimulus to help reboot the economy during the coronavirus pandemic. The hydrogen commitment is part of some €40 billion earmarked for climate-related spending.

Hydrogen strategy still not firmed up

Ministers on Wednesday got together to debate and approve a joint strategy on how to use the resources freed for the green hydrogen project.

Summing up the results of the Cabinet meeting, German Economy Minister Peter Altmaier said the plan was to use green hydrogen where it mattered most and where it was bound to have the biggest impact. He spoke of decarbonizing industrial processes, particularly mentioning "the need for Germany to produce climate-neutral steel."

German Environment Minister Svenja Schulze told reporters that "green hydrogen will mean a boost to climate protection efforts," adding that a nation like Germany should be able to afford "the very complex and expensive hydrogen production."

"What we need now are really big industrial facilities as potentially we will also be able to sell our product to clients across the globe," Schulze argued.

German Transport Minister Andreas Scheuer said he wanted his country to become a leading hydrogen producer in Europe and beyond, saying that greener mobility concepts could be accelerated that way.

For the production of water-extracted hydrogen to be a mostly carbon-free process, it will require a massive ramp-up in wind and solar energy production. Only once renewable energy production is accelerated can green hydrogen be deployed in power stations plus heavy industrial processes and to replace gas and oil in the heating and transport sectors.

"The problem is that Germany's renewable production is lagging, and the one thing that is missing in the [government's] recovery package is a plan to accelerate the production of other renewable energy (like wind farms)," Agora's Schäfer added.

Wrangling continues within the grand coalition over exactly how much production capacity should be allotted to hydrogen. The center-left SDP wants the government to commit to 10 MW a decade earlier than Chancellor Angela Merkel's conservatives.

Economy Minister Peter Altmaier conceded it would not be possible to produce enough hydrogen from renewables domestically and an import industry must be built up from wind and solar-power intensive nations to achieve CO2 targets.

Development Minister Gerd Müller agreed that extensive cooperation with suitable partner nations would have to be part of the equation. He mentioned a "hydrogen alliance" with Morocco and plans for the construction of a green hydrogen facility in the African nation to be the first of its kind on the continent. The project is to show that green hydrogen can be produced in a competitvely viable way. Once up and running, the facility is meant to reduce CO2 emissions by 100,000 tons annually.

In addition to the €7 billion earmarked for green hydrogen in Germany, the government stimulus includes a further €2 billion to build up partnerships with other countries.

"We need a European collaboration on hydrogen, which when combined with the renewables capacity of countries in the European south, could help Germany achieve its renewables requirements," Agora's Schäfer told DW.

Meanwhile, German states are already gearing up to welcome new green hydrogen facilities. The northern city state of Hamburg, for example, announced plans in September to become home to the world's largest hydrogen electrolysis plant with a capacity of 100 megawatts.

The southern state of Bavaria, meanwhile, has set up a hydrogen research center and has roped in carmakers Audi and BMW, along with Siemens and energy supplier Bayernwerk.

Read more: Power-to-X: The secret to a 100% renewable energy system?

German gas pipeline operators, earlier this year, revealed the blueprint for the world's largest hydrogen grid, which would cover around 5,900 kilometers (3,666 miles). Details about the first section (when ready in 2030, it will be some 1,200-kilometers in length) were released last month. Only 100 kilometers of the first stage would need to be built, with the rest being converted former gas pipelines, according to the grid operations' association FNB Gas.

FNB Gas said the H2 Startnetz 2030 would allow some 30 specific green gas projects identified in northern Germany to connect with key areas for green hydrogen demand in the states of North Rhine-Westphalia and Lower Saxony. The network is expected to cost €660 million and will eventually link to the Netherlands, which aims to have 30%-50% of its energy generated by decarbonized gas by 2050.

Despite the hype around green hydrogen, last year, a report by the International Renewable Energy Agency (Irena) warned that the fuel "should not be considered a panacea." It said that hydrogen would still likely "trail other strategies" for carbon-free energy due to the cost of production and would only have very targeted applications.

Are hydrogen cars the future?

Germany's Transport Minister Andreas Sheuer is proposing a multibillion-euro stimulus plan aimed at boosting investments in digital infrastructure and rail transport, according to a media report. (30.05.2020)

French train maker Alstom has rolled out the world's first hydrogen-powered train on a regular route in Germany, in a push to challenge the reign of polluting diesel trains with costlier but more eco-friendly technology. (17.09.2018)