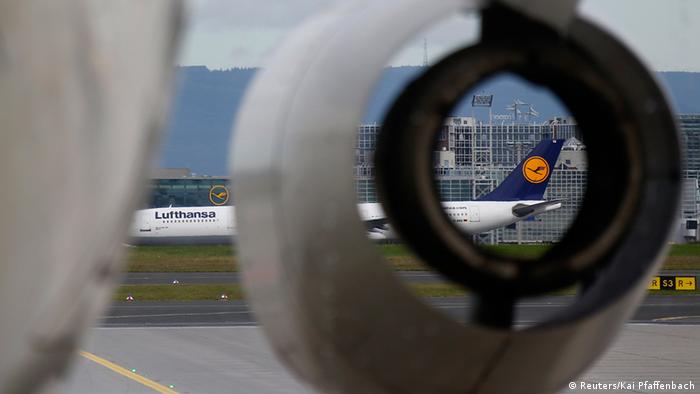 At the National Aviation Conference, a gathering of politicians and aviation professionals held in Germany's eastern city of Leipzig on Wednesday, Chancellor Angela Merkel said that Germany should become a global leader in producing climate-friendly aviation technology.

"It is important that the aviation industry can demonstrate how growth is not always connected to emissions that are harmful to the climate," said Merkel.

On Wednesday, the German government introduced the "Leipzig Statement for the Future of Aviation," a document signed by industry and government officials outlining the future of climate-friendly German aviation.

"The federal government supports the development of new propulsion methods, along with climate-friendly aircraft technology as part of the aviation research program," said part of the statement. 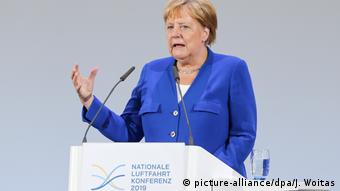 In Leipzig on Wednesday, Merkel called for a sustainable and profitable German aviation industry

However, to implement this innovation plan, more money will have to be redirected into research and development of non-fossil fuel energy sources.

German Transport Minister Andreas Scheuer said Wednesday in Leipzig that the government was "committed to ensuring that the revenue of the aviation tax is used for research, innovation and climate goals." This would require tax reform, specifically earmarking an aviation tax for research into alternative energy sources.

Scheuer also mentioned increasing the aviation tax with input from the German aviation industry on how to best "adapt" tax revenues towards innovation.

Hydrogen power to the rescue?

During her speech in Leipzig, Merkel also announced a strategy for developing hydrogen energy in Germany set to be introduced by the end of 2019.

"The potential of hydrogen for aviation has not yet been realized," said Merkel.

Ideally, synthetic fuel could soon be used in place of kerosene-based jet fuel, produced with green electricity through hydrogen dialysis. Additives to fossil-based kerosene have long been tested and approved. But the problem is that only very small quantities of climate-neutral fuel are available at very high prices.

Merkel admitted this, but added: "It has been the case with every technology that it was very expensive in the beginning."

Despite good intentions, until alternatives are made affordable, the European aviation industry will continue to be a major contributor to greenhouse gas emissions.

"In the long term, we cannot do without hydrocarbons on long-haul routes," the president of the Federal Association of the German Aerospace Industry, Klaus Richter, told Germany's dpa news agency.

Although Merkel said the aviation industry needed to become more climate-friendly, the chancellor added that Germany "does not want forced restrictions on our mobility."

Earlier in August, the association of the German aviation industry released a six-point program outlining a strategy to sink CO2 emissions from aircraft.

Merkel praised the sector's voluntary goal of stopping aircraft emissions from rising starting in 2020 and then reducing emissions by 2050 to half the level measured in 2005.

Your carbon footprint is much worse than you think

Members of the German parliament increased their air miles last year compared with the year before, a media report says. Members of the climate-conscious Greens racked up the most flights per head of any party. (10.08.2019)