In an effort to fight climate change, the Left party has proposed nationalizing Germany's airlines. Aviation regulation is currently at the center of a political debate on achieving targets for reducing emissions. 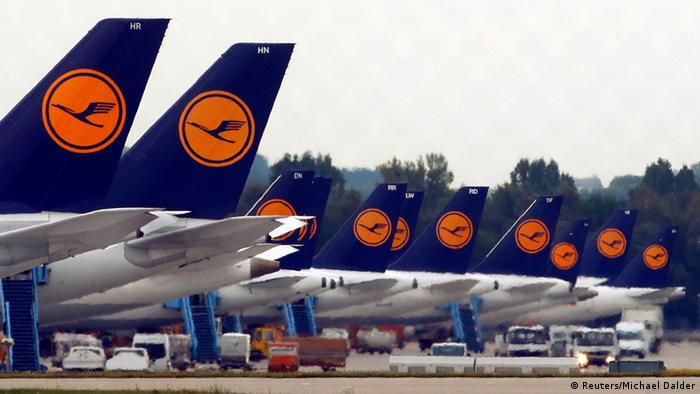 Amid record-setting heat waves andcalls for more action from governments to mitigate climate change, regulating air travel has become a hot point in debates on achieving emissions targets for greenhouse gases. Some German politicians are calling for drastic reforms to the airline industry.

On Saturday, Bernd Riexinger, the chief of the Left party, said the only way to make Germany's airlines operate ecologically would be to put them under the control of the government.

"Capitalism is not compatible with climate protection," Riexinger said in an interview with Germany's Funke Media Group about the role of major corporations in climate change.

"Anything that can have such dramatic social consequences must not remain market-driven and unregulated," Riexinger said. "Airlines belong in the hands of the state — just like the railroads or power production."

Riexinger said that flying has become "irresponsibly inexpensive" and therefore has exacerbated climate change. A return to state-controlled airlines could make prices more expensive and climate-friendly.

"We have allowed wild competition to take over the airline market to the detriment of employees and the climate," Riexinger said.

Karl Lauterbach, a candidate to take over as head of the center-left Social Democrats (SPD), responded in a tweet that more investment is the solution, not takeovers.

During a meeting in July with the climate cabinet, a group of high-level ministers dedicated to producing climate change legislation, Germany's environment minister, the SPD's Svenja Schulze, called for an increased aviation tax. She has also said flying should never be a cheaper alternative to taking the train.

And, earlier this week, the head of the Greens, Robert Habeck, told media that he supports phasing out all domestic flights in Germany by 2035. He also called for a tax on jet fuel, which could be used to fund expanding Germany's rail network.

Germany's aviation union has expressed opposition to increased taxes on airlines, arguing that flyers will only turn to carriers based in other countries.

According to greenhouse gas emissions figures from the Environment Ministry published in the newsweekly Der Spiegel, short-haul domestic flights made a small contribution to Germany's total emissions when compared with emissions from cars and trucks and energy production.

The figures from 2018 show that domestic flights in Germany contributed to 2 million tons of greenhouse gas emissions, out of the total 180 million tons from all transportation.

The article pointed out that international flights originating in Germany, such as a round trip from Frankfurt to the US East Coast, released nearly as much greenhouse gas as a single person in Germany over an entire year.

By the end of September, Germany is expected to submit plans for fulfilling its domestic and international climate goals. Proposals include CO2 taxes on gasoline, heating oil and natural gas.