Svenja Schulze has said such a plan is important for sinking carbon emissions, yet other measures are needed. She claims the plan would not unduly burden the poor, but reward those who use less fuel. 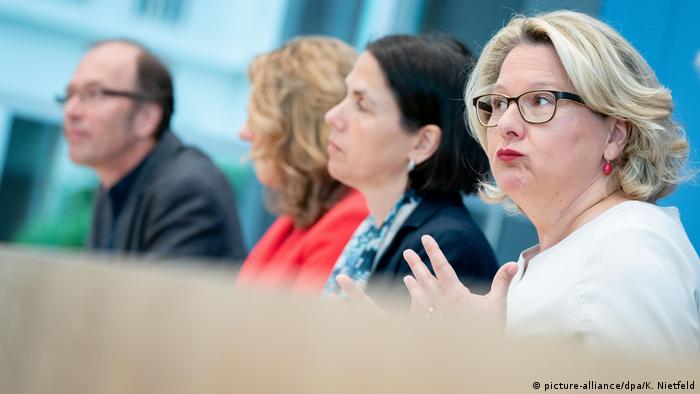 Germany's Social Democrat (SPD) Environment Minister Svenja Schulze presented three independent studies on possible carbon tax schemes in Berlin on Friday. Insisting such a tax would not unduly burden the poor, she said, "those who decide to live a more climate-friendly life could actually get money back."

The plans Schulze presented suggested an initial €35 ($39.50) tax on each metric ton of CO2, to be increased to €180 by 2030. The idea being that the more expensive petrol, natural gas, and heating oil become, the less people will use.

Read more: 'Only a C0² price can halt climate change'

Schulze told reporters that those who consume less, including children, will be given a so-called climate bonus of up to €100 per person, per year, which she claims would offset a person's outlay for the tax, "The less you drive, the less oil you burn, the more you will get back."

The minister underscored the importance of not burdening low and middle-class families: "It's really important to me to avoid unfairly burdening those with low and medium incomes, and especially affected groups like commuters and tenants."

Not a 'silver bullet'

Though environmentalists and economists have long called for such measures, citizens are not always so convinced. In France, a green tax on fuel led to months of violent anti-government protests.

A carbon tax, said Schulze, is not a "silver bullet," adding that more measures would be needed if Germany is going to get serious about meeting its own emissions reduction targets as well as those agreed to internationally.

The proposal is expected to run into strong resistance from Germany's powerful automobile lobby, and its path within the government is uncertain.

Schulze says she has not committed to any of the three proposals that her ministry commissioned. The SPD and its coalition partners, the conservative CDU/CSU bloc, are set to discuss the proposals in the second half of September.

Although the SPD has signaled support for such a tax, conservatives are divided on the topic. The CDU/CSU are scheduled to discuss their own climate package in mid-September.

Germany is currently on course to widely miss its target of reducing greenhouse gas emissions to 55% less than 1991 by the year 2030.

Development Minister Svenja Schulze has called on Russia to allow delivery of tens of thousands of tons of grain stuck in Ukrainian ports. She also pledged Germany's help in reconstruction.

With Germany's transportation and housing sectors lagging behind their climate goals, ministers are hoping to introduce more bike lanes and energy-efficient buildings. But climate activists say the plan is too vague.